The optimistic scenario of global rosemary extract market is estimated to record the growth at a CAGR of 4.8% to be valued at more than US$ 1,000 Mn. However, according to the conservative scenario the market may record a CAGR of 3.9% to be valued little more than US$ 970 Mn by the end of 2027. The global rosemary extract market is anticipated to witness significant Y-o-Y growth during the forecast period, however, the optimistic growth is expected to be 5.5% by 2027.

In 2017, the base case scenario of the global rosemary extract market has been estimated to be valued at more than US$ 660 Mn, which is estimated to increase at a CAGR of 4.8% over the period to reach more than US$ 1000 Mn by the end of 2027.

North America: The demand of herbal extract is trending in North America regions’ nutraceutical market. Rosemary extracts is in great demand in North America owing to their potential nutritional, safety and therapeutic effects. The demand for herbal foods continues to grow due to rising interest in in different study fields such as Ayurveda, food industry and pharmaceutics.

Latin America: In Latin America the herbs are used in barbeque sauce for the authentic taste. The consumers in this region are more inclined towards traditional herbs and spice extracts in pickles, soups, sauces and even in ice creams, as herbs or spices increase the shelf life of the product without adding salt and sugar that increase calories.

Western and Eastern Europe: The growing trend of aromatherapy in Western Europe is creating a positive impact on rosemary extract market as 84% aroma therapists use rosemary oil in their treatments. While in Eastern Europe particularly in Russia, consumers are more inclined towards the use of environmentally sustainable food ingredients like herbs and spice extracts which mostly grow in Russia and Poland. Russian government is also providing subsidies to farmers to promote and strengthen the local herb and spice market.

APEJ:  Government has initiated E-chilli bazar to strengthen the farming community of India. By improving traceability, the transparency among farmers and government is created for the better market reach and price realization for chili farmers of Kerala, Andhra Pradesh and Telangana.

Japan: Most medicinal herbs in Japan region are sold as dried or powdered products that are processed into tablet or capsule form. Other value-added forms include teas, tinctures, creams, oils and liquids. Thus rosemary extract is gaining traction in the Japan market with its availability in various forms.

MEA: In MEA demand for natural antioxidants is rising due to growing trend of organic and natural ingredients in cosmetics and beauty products, and this has augured well for rosemary extract manufacturers. 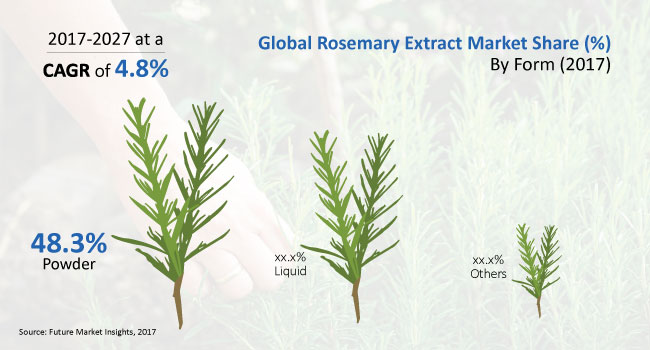 The global rosemary extract market is segmented into following categories