As the global safety needles market is replete with continuous new innovative technology and novel product launches, companies in the safety needles market across the world are actively engaged in the process of mergers and acquisitions in order to strengthen their product portfolio and cement their position in the market.

Top market players are adopting the strategy of mergers and acquisitions to enhance their brand value and to develop more effective and efficient products while meeting the global standards for safety and efficiency. This will help companies increase their market share and expand their consumer base in uncharted territories.

In 2015, Boston Scientific reached an agreement announcing the acquisition of Xlumena, a company that manufactures minimally invasive devices to carry out endoscopic ultrasound (EUS) enabled transluminal drainage of specific target areas in the gastrointestinal tract. According to the terms and conditions of the deal, besides an initial upfront payment, Boston Scientific shall also pay an additional amount to Xlumena once the FDA gives clearance to Xlumena’s HOT AXIOS device.

In addition, sales milestones as per volume sales achieved in 2018 are also a part of the deal. The advanced HOT AXIOS Stent and Delivery System integrates cautery in the AXIOS stent that has been approved by the FDA. This strategic acquisition will help Boston Scientific establish its stronghold in the EUS segment

In the year 1991, the Blood Borne Pathogen standard was established in the U.S. 1999 was a landmark year as anti-needlestick legislation was implemented in California, U.S. In the year 2000, Federal Anti-Needlestick legislation was passed in the U.S. In 2005, order 827/2005 was set by the Ministry of Health in Spain. In 2007, the National Health Service Reference Guide was implemented in the U.K. In the same year, Sharp Injury Protection was legislated in Germany. In 2008, Sharp Injury Protection was legislated in Canada. 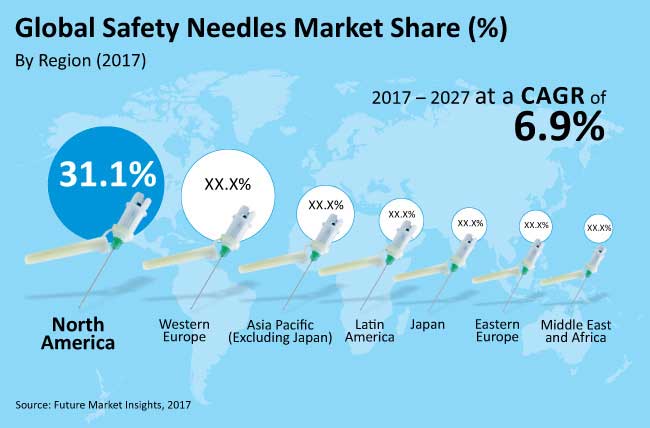 In order to avoid hospital acquired diseases such as HIV, Hepatitis C and Hepatitis B etc., governments in various countries are implementing stringent regulations as mentioned above. Needlestick injuries sustained from contaminated needles can result in infections from various harmful blood borne diseases. As per a report by the Program for Appropriate Technology in Health (PATH) published in 2005, due to the reuse of contaminated needles, 2 Mn Hepatitis C infections, 20 Mn Hepatitis B infections and 250,000 HIV infections are caused annually.

Various government supported norms such as Needlestick Safety and Prevention Act, Needles Exchange Program and implementation of OSHA’s blood borne pathogens standards are increasing awareness among the population about diseases caused by using contaminated needles, and this factor is likely to fuel the demand for better quality safety needles.