By connectivity, the Bluetooth connected smart insulin pen segment is expected to account for a value share of US$ 0.276 Mn in 2017. The segment is expected to reach a little more than US$ 2 Mn by 2027 end, registering the highest CAGR of 23.2% over the forecast period. Bluetooth connected smart insulin pens represent the future of insulin delivery devices.

Such devices have an inbuilt Bluetooth connectivity feature allowing automatic insulin dosage data sharing with healthcare providers. The contribution of the Bluetooth connected smart insulin pen connectivity segment to the overall smart insulin pens market revenue is expected to increase from more than 30% in 2017 end to close to 50% by the end of 2027, with an increase of more than 1000 BPS.

Increasing prevalence of diabetes is one of the growing concerns currently. According to the International Diabetes Federation, an estimated 415 million people were suffering from diabetes in 2015. This is projected to reach 642 million by 2040. Therefore, daily insulin dose management among diabetic patients is important in order to better manage the disease leading to rapid penetration of smart insulin pen technology in the global market. Smart insulin pens have transformed diabetes care through digitalisation and connectivity. A rapidly increasing diabetic patient pool is expected to create a positive impact on the Bluetooth connected smart insulin pen segment.

Diabetes management with conventional insulin pens available in the market is tedious, time-consuming and requires patients to remember and document their data, making it difficult for them to manage their insulin dosage in a timely manner, and can lead to a misinterpretation of the results. Bluetooth and USB enabled smart insulin pens allow users to track their insulin doses and facilitate seamless documentation of insulin units and blood glucose levels.

Smart insulin pens also send alerts to patients and healthcare professionals in case of missed doses. This is attributed to an increasing number of manufacturers focussing on introducing devices with smart connectivity, which allow automatic insulin dose data transfer on the patient portal for streamlined data dosage management. 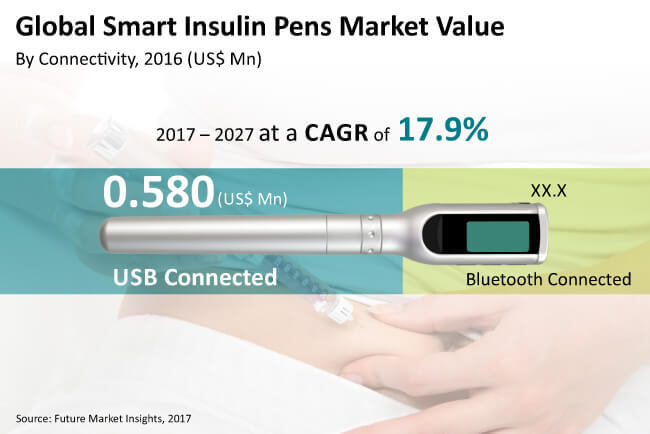