Due to changing lifestyle, major changes in food consumption patterns and eating habits are being noticed across the globe. There has been a significant rise in per capita consumption of packaged food and beverages, which is likely to have a major impact on the demand for sodium metabisulphite. Sodium metabisulphite is used as a preservative in dried foods and canned juices, amongst others. It is also being used as an important additive in the sea food processing majorly shrimps. Sodium metabisulphite is also used as a softener in dough for making bakery products.

Sodium Metabisulphite is a subcategory of sulphur derivatives and is gaining popularity owing to the stringent regulations prohibiting the use of sulphur dioxide to reduce harmful emissions. Various grades, such as food grade and industrial grade, of sodium metabisulphite are being manufactured to be used across major end-use industries, such as paper and pulp, textile, water treatment and mining, amongst others.

Apart from its use as preservative in the food and beverage industry, sodium metabisulphite is also used as a bleaching agent and anti chlor agent in the paper and pulp and textile industries for strain removal and brightening and improving the quality of fabric. Sodium metabisulphite is also widely used as an anti chlor agent in the water treatment industry. Sales revenue of Sodium Metabisulphite is expected to be nearly 159.1 Mn in 2018. By the end of the forecast period, the global Sodium Metabisulphite market is projected to reach a value of US$ 266.5 Mn, recording a CAGR of 5.3%.

Ageing mineral deposits are resulting in decreased grade of mineral ores. Due to the depleting reserves globally, the mining industry is facing the problem of low productivity. The quality of ore is getting affected and as a result, there is need for exploiting reserves that lie deeper inside the earth. Attributing to this complexity in mining, the demand for mining flotation chemicals is increasing. This has led to growth in the use of chemicals, such as cyanide, for the extraction of gold from low grade ores.

Sodium metabisulphite, as a reducing agent, helps to remove cyanide and extract pure gold. It is widely used for cyanide detoxification in gold mining. It is also used as a source of sulphur dioxide for the destruction of cyanide in the commercial gold cyanidation process.

Over the past decade, availability of fresh water resources has significantly declined across the globe. In addition, climatic changes and water pollution threats have considerably increased. Various regulations have been formed by concerned environmental agencies and government authorities with an aim to support water conservation and reduce water pollution, which is leading to increasing demand for chemical processing of water.

On the basis of Grade, the global Sodium Metabisulphite market is expected to be dominated by industrial/technical segment.

ASEAN and other Asian countries are mainly dependent on the import of sodium metabisulphite from the U.S., Europe and China. Europe holds nearly 18% share in the global Sodium Metabisulphite market. 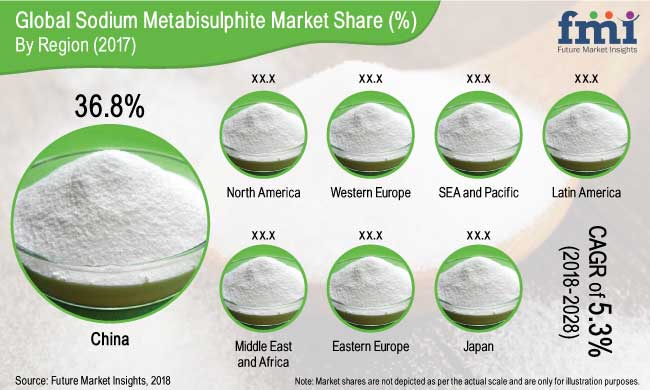 To understand and assess opportunities in the global Sodium Metabisulphite Market, we have divided the report into four sections based on market segmentation as under: