Sodium is primarily consumed as a critical food ingredient that contributes to multiple important attributes, such as food preservation, sensory qualities, and shelf-life. In an effort to reduce the sodium composition in various food products, food scientists and food technologists have been developing innovative technologies that may allow sodium reduction ingredient in a variety of products, while maintaining critical product quality attributes such as taste, texture, safety, and shelf-life, as well as regulatory compliance. 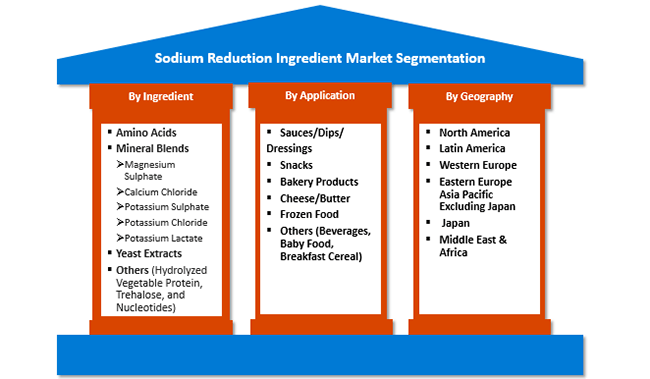 Among the sub-segments analyzed under mineral blends in sodium reduction ingredients market, calcium chloride is expected to grow at a higher CAGR of 11.8%, during the forecast period.

The growth of the global sodium reduction ingredient market is mainly driven by rising awareness among consumers regarding the adverse effects of high sodium intake coupled with the continuous launch of new range of reduced sodium products by major food & beverage industry players across the globe. Continuing increase in the incidence of obesity puts millions of people at risk of sodium-sensitive blood pressure disorders.

The initiative entails signing of voluntary agreements with major food manufacturing companies to progressively reduce salt content in processed foods between 2013 and 2015. Till date, 20 food companies including Nestlé and Kraft Foods have signed the agreement. A government-run monitoring plan tracks the progress of the initiative in the industry by testing food products and measuring societal impact through sodium intake surveys and voluntary urine sample analysis.

Food regulatory authorities in different regions have proposed various guidelines for sodium reduction ingredient and its usage in food products. World Health Organization (WHO) recommends that adults consume less than 2,000 mg of sodium or 5 grams of salt, per day. Moreover, the ‘Dietary Guidelines for Americans 2010' recommends that daily sodium intake should be less than 2,300 mg per day and less than 1,500 mg for people aged 51 and above.

In 2008, the European Union developed a framework regarding the reduction of salt content in food. This is in compliance with WHO's proposed strategy to reduce salt consumption in Europe by 16% over the following four years (against individual country baseline levels in 2008). As per the framework, 12 food categories were identified as priorities, with each member state choosing at least five categories as part of its national salt reduction plans.

Sodium reduction targets are to be achieved through step-wise implementation approach, with the intermediate target to be met by 2016 and the final target by 2019. United Kingdom's Food Standards Agency (FSA) published its first set of voluntary salt-reduction targets in 2006.

The targets applied to 85 food categories, including processed meats, bread, cheese, convenience foods, and snacks. In March 2014, the Japanese Association of Hypertension translated and distributed various informational booklets published by Consensus Action on Salt & Health (CASH) such as ‘How to measure salt intake in clinic’, ‘What is the rationale behind recommending hypertensive patients to reduce their salt intake?’ and ‘Cooking booklet to maintain 6g salt per day.’ The objective of this campaign was to increase consumer awareness about low sodium food products in the country.

Due to the growing government food regulations relating to sodium reduction ingredient, major food retailers especially in Europe, are focusing on reducing sodium content in their food products. For instance, retailers such as Musgrave Retail Partners GB that owns Londis and Budgens are working towards meeting the FSA’s revised salt targets for 2010.

The company has already achieved salt targets in 25 food categories. Tesco Stores Ltd., with 2,300 stores across the U.K., is focusing on sodium reduction ingredient in its food products. The company claims to have cut down on 145 tonnes of sodium from ready meals, 780 tonnes from bakery products and 250 tonnes from meat products.

In October 2012, Nestlé S.A announced a partnership with life sciences company Chromocell Corp. Under the collaboration, the company will use Chromocell’s proprietary Chromovert Technology to discover sodium reduction ingredients that provide similar taste as salt albeit with low sodium content. This partnership is expected to help Nestlé to develop culinary dishes with low salt content. 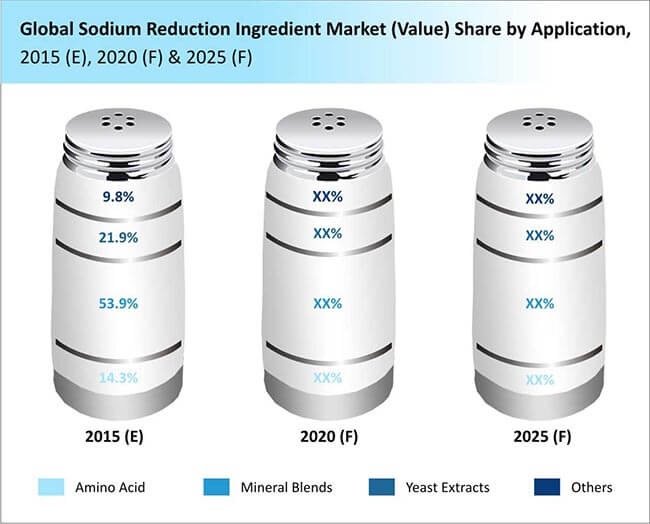 In 2013, Cambrian Solutions Inc. in collaboration with Scelta Mushrooms BV developed two ingredients for sodium reduction and as replacements for MSG, I+G, and autolyzed yeast extract. The ingredients are based on the science of Umami and are natural sodium reduction ingredients that do not compromise on taste and function.