In terms of value, the global market size of the textile staples market is expected to expand from nearly US$ 125 Bn in 2017 to over US$ 200 Bn by 2027, registering a CAGR of 4.9% during the forecast period 2017 – 2027. The global textile staples market is expected to create total incremental opportunity of nearly US$ 82 Bn between 2017 and 2027. Several factors are responsible for this significant market growth.

Textile components are widely used in transportation vehicles and systems including cars, trains, buses, airplanes and marine vehicles. The automotive sector is witnessing rapid development in China along with parts of Southeast Asia. In a fluctuating economic environment, the Chinese automotive industry has registered steady sales growth.

Also, India’s economy is expected to grow at a robust pace in the coming years as most economic indicators predict a positive outlook towards the automotive industry, driven by strong consumer demand. This in turn will have a positive effect on the textile staples market during the forecast period.

APEJ has been regarded as a source region of exports, as China and other developing countries such as India are significant producers of textile staples. However, the region is slowly becoming an important consumer as well, because of consistent growth in incomes driving demand for textile staples.

In recent years, there has been a rapid increase in household cotton consumption in developing regions than in other parts of the world. The increased penetration of organised retail is also likely to boost the consumption of textiles in the domestic markets, especially in India.

The historical market scenario of the textile staples market reflects the cyclical pattern of the industry including natural as well as synthetic fibre with periodic overcapacity and resulting pressure on pricing. This cyclical nature arises, in part, from investments made at the top of the cycle for cashing high margins with available funds, thereby shifting the balance of supply to demand as new capacity comes on-stream in large quantities.

In the absence of sufficient economic growth to generate increased demand, or the closure of facilities to mitigate the effect, new capacity causes a period of regional or global overcapacity often leading to downward pressure on margins. It is anticipated that this cyclical pattern may hamper the growth of the market at a global level during the forecast period. 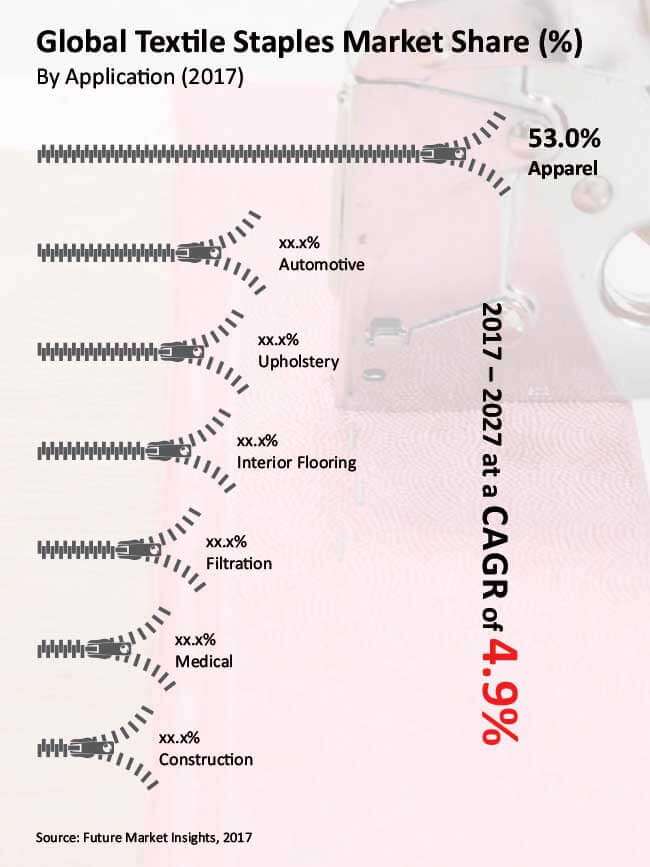 The fast-paced economic growth leading to infrastructure development as well as higher disposable incomes have made India a key market for technical textile products. Moreover, the country has established a foothold in the production of technical textiles owing to its skilled and technical manpower as well as abundant availability of raw materials.

The cotton staple will remain dominant among other natural fibre counterparts as rising middle class in developing countries has a special preference towards cotton. In developed regions, consumers concerned about the environment are also preferring natural fibres. The demand for synthetic textile staples, led by polyester, will be driven by technology advancement as functional aspects can be easily incorporated in them for technical applications.