The global construction industry is anticipated to record a robust CAGR of 5.3% for the forecast period. Rapid growth in the manufacturing and service sector has had a positive impact on global GDP growth. This in turn, directly benefits the global tower crane market, leading to greater demand for construction aggregates. The construction industry is expected to witness steady growth on account of massive urbanisation underway in emerging economies in APEJ, primarily due to a rural population migrating to urban areas in search of work.

Increased building construction coupled with a demand for rental cranes should spur demand in the tower crane market. With a slow economic recovery, high-rise buildings have cropped up in densely-populated cities that necessitate tower cranes. In addition to this, companies are seeing demand for hammerhead and luffing boomed tower crane models recently. 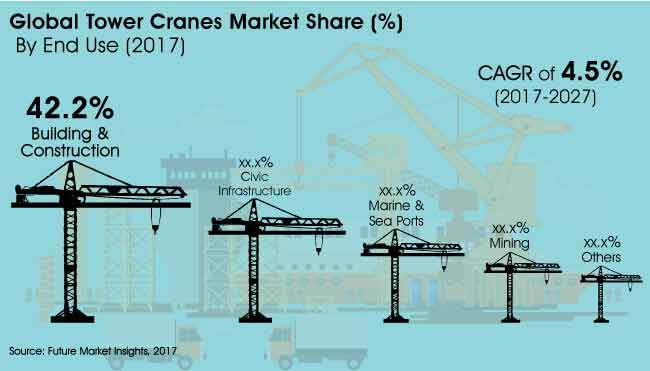 The mining industry had a positive outlook from 2014 to 2016 and is likely to grow further because of upcoming projects in countries as diverse as Australia, Brazil, China, and India. The mining industry should grow at a rate above 3.4% over the course of the next decade. Furthermore, there is a concerted effort to build infrastructure such as high-speed railways, roadways, dams, and highways seen in both developed and developing nations.

The former wish to improve their existing infrastructure while the latter typically build it from scratch. Some of the projects include High Speed 2 Rail Link in the UK and Grand Paris Express Metro Rail in France. The civic infrastructure segment of the Western Europe tower crane market had a market value of over US$ 250 million in 2016 and is poised to be worth just under US$ 380 million by end 2027.

Every sector today, be it manufacturing, consumer durables, or FMCG goods, requires material handling equipment such as tower cranes. Government initiatives go a long way in making a country self-sufficient and competitive in terms of export. A population explosion in emerging economies has led to mass migration, causing tremendous strain on existing urban infrastructure. Therefore, national and regional governments provide soft loans to spur investment and FDI in the construction and industrial sectors of the economy.

However, this can be challenged by ever-changing factors including cyclical industrial growth, inflation, political uncertainty, project approvals, interest rates, and many other factors. Macroeconomic factors affect the steel, mining, and real-estate industries which in turn restrict the growth in the tower crane market. The building and construction segment in the APEJ tower crane market is projected to have the highest CAGR of 4.2% from 2017 to 2027.

The vast majority of material handling equipment used in the farming, forestry, mining, and construction industries are difficult to operate and have to be handled with extreme caution. The equipment is often big and bulky and can easily lead to grievous injuries or even death if not handled properly. This can naturally make buyers wary, restricting the prospects of the tower crane market. The International Labour Organization estimates that more than 2 million people die annually because of workstation and occupational accidents. In economic terms, this is almost 4% of global GDP.