We, at Future Market Insights, have researched upon the tower mounted amplifiers market in depth considering all angles that govern the market growth in the coming years. The research report on global tower mounted amplifiers has shown healthy growth since past several years. The forth coming years are also expected to be attractive for the market’s growth. The analytical research report includes various insights on several trends, developments, growth drivers, restraints as well as key opportunity areas across main regions in the globe. According to the research report, the global tower mounted amplifiers market is expected to grow at a stellar pace to register a value CAGR of 9.1% throughout the period of assessment, to reach a significant valuation by the end of the assessment period.

As per our research, in the coming years, multi band tower mounted amplifiers are expected to witness substantial growth. The rising adoption of smartphones and increased internet penetration has caused an increase in the mobile data that produces massive data traffic. This data traffic produces congestion problems consequently resulting in poor performance of the network. With a view to avoid congestion and enhance performance of the network, the developers can highly invest and develop new technologies, such as the multi band tower mounted amplifiers, that can enable service providers to deliver improved network operations with better coverage and increased bandwidth. 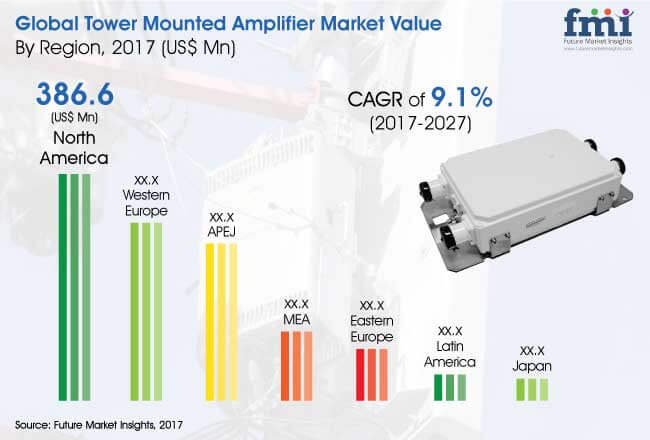 North America has a high tablet and smartphone penetration rate. Advanced electronic devices such as tablets and smartphones are gaining high traction among consumers, especially the young generation in the region. According to the Consumer and Community Development Research Section of Federal Reserve Board, in US about 77 percent of mobile phones are smartphones. The use of compact electronic devices such as smartphones is expected to further increase in this region, making the deployment of tower mounted amplifiers imperative, thus pushing the growth of the market in this region. In 2017, the tower mounted amplifier market in North America was valued at about US$ 386 Mn and is estimated to touch a valuation of more than US$ 975 Mn by the end of the year of assessment (2027) and is projected to expand with a noteworthy value CAGR of 9.7% throughout the period of assessment.

With a view to get a clear market picture of tower mounted amplifiers, we have presented key acumen in a systematic format in a new research report on global tower mounted amplifier market. It uncovers each and every aspect of the market, with the help of a robust research platform. It unmasks numerous acumen on the macroeconomic factors, SWOT analysis, regulatory aspects, and other angles which govern the dynamics of the market influencing its growth. These traits help in devising an accurate marketing strategy or entry tactic or even expansion, simultaneously dealing with the unforeseen events present within the market scenario.

A robust research methodology to assemble data and figures

At Future Market Insights, an exclusive research methodology is applied to garner necessary market intelligence. Secondary research followed by primary research and key opinions from subject matter experts, market observers and other external sources is carried out. The initial secondary research is initiated which is extensive in nature and covers all the angles of the tower mounted amplifier market following which a primary research is carried out with which further deep diving is carried out. Simultaneously, market observers and domain experts which have a completely unbiased knowledge about the market, are interviewed to gain essentials of the market pertaining to the market scenario in different regions across the globe. Each key aspect or statistic or number is cross checked, re-verified, evaluated, analysed and validated over the course of the entire research. As every conversation gives a more or less different view, the statistics and data undergo a triangulation process to arrive at a certain number. This data point reflects maximum accuracy which fuels the credibility of the information that the report contains.

The research report on global tower mounted amplifier market includes a separate chapter on competitive assessment that includes several key players involved in the operations associated with tower mounted amplifiers. Key information on these players such as current scenario, their geographical spread, their expansion plans, the new strategies they have come up with, new developments in their products as well as innovation to enhance their product portfolio, mergers and acquisitions as an expansion strategy, marketing strategies, market share, revenue, company strength, strategic alliances, etc., has been covered in this chapter. This can give the reader a broad idea of the happening events in the market, initiated by these players with the support of which new plans or tactics can be developed and implemented.

To sum up the characteristic features of the global tower mounted amplifier market research report, it presents an unbiased opinion of the global market along with key recommendations, it reflects a global perspective covering major geographies, includes a weighted market segmentation, provides actionable acumen that can be used runtime, covers a detailed competitive scenario and puts forth a realistic and accurate picture of the global market to support the reader in making informed decisions and gaining advantage in the long run.