The use of ultrasound conductivity gels is incessantly across the globe with government support and healthcare expenditure increasing. Government try to minimize the infant and maternal mortality rate employing different schemes and moreover, high population growth and flourishing economy are key dynamics bolstering growth of ultrasound procedures which increase the demand for ultrasound conductivity gels in the global market.

The government is employing different schemes for reduction in maternal and infant mortality rate. For instance, Central schemes in India such as the Janani Suraksha Yojna has been launch by government of India so that the women in rural areas can take advantage of professional medical care during prenatal period and have deliveries in hospitals and primary health care centers rather than at home.

Moreover, the increase in the deployment of diagnostic ultrasound procedures has been due in part to technological advances, which have improved the quality of ultrasound images and physicians' aptitude to engage them to diagnose medical conditions. T

echnological advancements have also resulted in the development of ultrasound devices which are lesser and more portable. The better portability of ultrasound equipment has made it easier for beneficiaries to receive ultrasound exams in skilled nursing facilities (SNF) which further surges the demand for ultrasound procedures and gels. 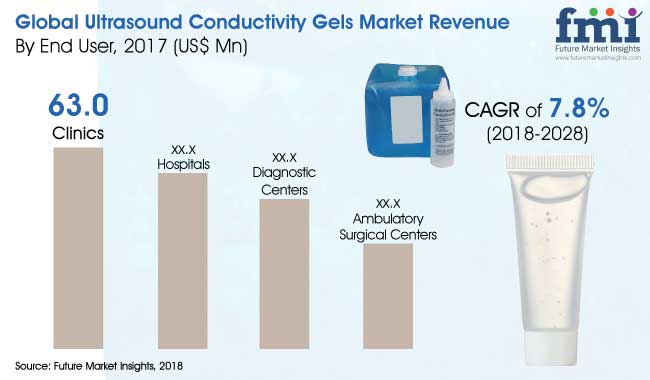 The use of ultrasound conductivity gels is comparatively high in clinics as compared to any other healthcare unit as the patients coming for these procedures and the number of procedures taking place is comparatively high here. Ultrasound scanning is considered as an important technology used in emergency wards, intensive care units, operating room and in prenatal conditions to deliver correct patient care.

The gel is applied at the beginning of ultrasound scan. It is also utilized with fetal Doppler to hear heartbeat of an unborn child. Currently, ultrasound technology is generally used in many hospitals and healthcare other facilities.

Additionally, the surge in the employment of ultrasound scanning in rural and remote areas due to its portability, availability, low cost and durability will increase the demand of ultrasound conductivity gels in low and middle cost income countries.

As ultrasound is most effective in limited healthcare resources, in past few decades, the ultrasound is gaining traction as a valuable imaging technology and helps in driving the diagnostic ability of hospitals in rural, resource limited countries.

The global ultrasound conductivity gels market has been segmented into: