The global handheld ultrasound scanners market is anticipated to show significant market share along with a stellar growth rate during the period of forecast of 2017 to 2027. The handheld ultrasound scanners market is expected to continue witnessing high growth as in the past and is projected to grow at a robust CAGR of 8.8% during the period of assessment to reach a market value of about US$ 725 Mn by the end of 2027 from a valuation of around US$ 311 Mn in 2017.

These high market statistics are surfacing owing to increase in the use of handheld ultrasound scanners among non-radiologists and modernization in healthcare coupled with high investment in research and development.

Hospitals to use more handheld ultrasound scanners in the coming years; Diagnostic centres and ASCs to contribute significantly

Hospitals segment by end user category is anticipated to be the largest segment with respect to market value during the assessment period. This segment witnessed gradual increase in revenue from 2012, however the rate increased in 2016, as it crossed a value of about US$ 100 Mn then. Since 2012, this segment was the most dominating segment and it has continued to show similar traits recently. In future, by the end of 2027, the hospital segment is poised to remain the largest by reflecting a high value of US$ 280 Mn growing at the highest CAGR of 9.3% throughout the period of forecast of 2017-2027. 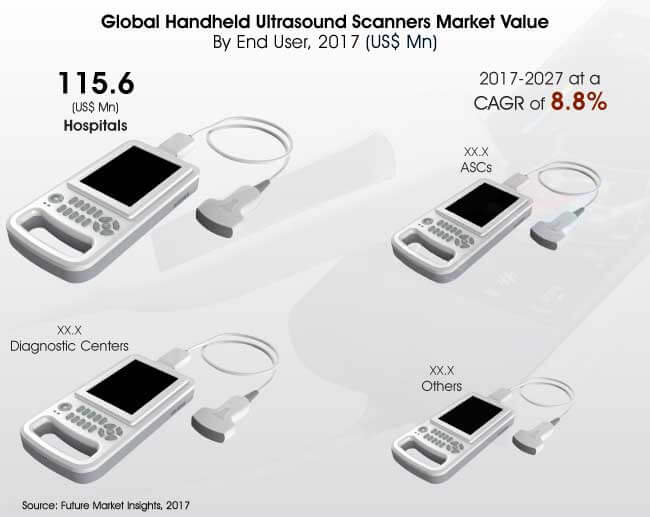 The hospitals segment in this region leads the market and is poised to be valued at US$ 48.3 Mn in Western Europe. In Asia Pacific excluding Japan, the diagnostic centres segment is poised to reflect a CAGR of 8.8%. APEJ region is the third fastest growing region and has a high potential in the years to come. It is estimated to show higher revenue than Western and Eastern Europe regions by the end of 2027.

Hospitals segment is growing at the fastest pace in Japan as compared to other regions, at a CAGR of 9.9%. Japan stands second with respect to growth rate in the coming years owing to favourable government regulations and increased developments in the healthcare domain in Japan. Adoption of handheld ultrasound scanners in hospitals, ASCs and diagnostic centres is comparatively less in the Middle East and Africa region, thus expected to reflect less revenue by 2027.