A slight drop in the demand was observed in the initial half of 2020, attributed to the imposition of stringent lockdowns amid the COVID-19 pandemic. Pandemic compelled the doctors to limit the breast ultrasound procedures to urgent and critical patients only.

The steps were taken to break the transmission chain of the virus. The skilled professionals were allocated towards tending the COVID patients thus restricting the market demand. However, strong recovery is in stores as breast cancer cases are surging globally.

In the future, the market is poised to grow significantly, as majority of diagnostics centers are switching towards automated breast ultrasound system from radiology and MRI techniques. India and U.K are likely to yield highly opportunistic prospects, contributing towards the overall expansion of the market.

How is Launch of Novel Technologies Affecting ABUS Market?

Implementation of high frequency sound waves to map the entire breast and create 3D monochromatic image of tissues and breast structure has fueled the market demand. Surging incidence of breast cancer is also attributed to increasing preference towards sedentary lifestyle and obesity.

According to World Health Organization, more than 50% of women in Latin America are suffering from obesity. Several leading organizations are investing in research and development to offer novel technologies for timely diagnosis.

For instance, GE Healthcare launched a new automated breast ultrasound system named “Invenia” in U.S in October 2018. The main function of the system is to identify the presence of mammographically occult cancer especially in women with dense tissues.

Integration of automated breast ultrasound system with other digital cancer screening operations and procedures will yield more accurate prognosis and will promote rapid adoption of ABUS in diagnostics laboratories.

According to a report published in National Library of Medicine, integration of mammography with automated breast ultrasound system increased the sensitivity of the system to 99.1%. The combination drastically improves cancer detection rate among dense breasted women and reduces the interpretation time.

Studies highlighting the benefits of automated breast ultrasound systems will create attractive opportunities for the market in the coming years.

A radiologist with expertise in ABUS is required to correctly interpret the volumetric 3D images and identify the region of breast lesion. Lack of skilled radiologists and increased cost of standardized training is hampering the market growth.

Lack of awareness in emerging economies regarding breast cancer and underdeveloped healthcare infrastructure in poor countries are also hindering the market growth.

Inability to display calcification among women aged above 45 years is a major area of concern among the market players.

How is the Automated Breast Ultrasound Systems Market expanding in the U.S?

The automated breast ultrasound systems market in U.S. is anticipated to grow exponentially during the forecast period due to growing prevalence of breast cancer across the country.

According to American Society of Cancer, in 2021 nearly 281,550 new cases of breast cancer will be detected in women with 43,600 women dying with breast cancer.

The rising incidence of breast cancer will fuel the demand for advanced breast imaging technologies and promote effective treatments. Increasing government campaigns to spread awareness and educate women about breast cancer and importance of screening will boost the ABUS market in U.S.

Why is the UK expected to be a Highly Lucrative Market?

Increasing mortality rate due to breast cancer will fuel the demand for developing modern cancer screening technology. Rising prevalence of obesity and growing alcohol abuse is propelling the breast cancer cases, thereby accelerating product demand. With improve efficiency and effectiveness of ABUS than mammography system a steady market growth is expected during the forecast period.

Why Is Demand for Automated Breast Ultrasound Systems Market Surging In Germany?

According to the German Center for Cancer Registry Data, breast cancer is the most common form of cancer in Germany with approximately 67,000 new cases of breast cancer was observed in women in 2017.

Presence of market leaders like Siemens along with modern healthcare system will boost the ABUS market in Germany during the forecast period. High per capita income and increased awareness regarding the screening of breast cancer will positively influence the demand of automated breast ultrasound systems.

Market players are working towards optimizing the automated breast ultrasound market in compliance with the strict government regulations and policies in Germany.

How Lucrative is the Opportunity in the Saudi Arabia?

Increasing government and private funding along with favorable insurance policies will boost the ABUS market sales. According to Global Cancer Observatory, breast cancer comprised of nearly 14.2% of total new cancer incidences in Saudi Arabia in 2020.

What Is Driving Adoption Of Cancer Diagnostics In India?

Market growth in India is expected to happen at a faster rate. The Breast Cancer India has reported that in 2018, about 27.7% of all new cancer cases diagnosed in women were breast cancers.

Rising population and increasing per capita income will provide a favorable climate for automated breast ultrasound systems market growth. The report also states that in 2018, India had the second highest breast cancer mortality rate with 87,090 women losing their lives to breast cancer.

These numbers indicate huge market penetration potential in India. Growing government initiatives to spread awareness regarding breast cancer among women and campaigns to reduce the mortality rate will be key factors driving growth in the market. 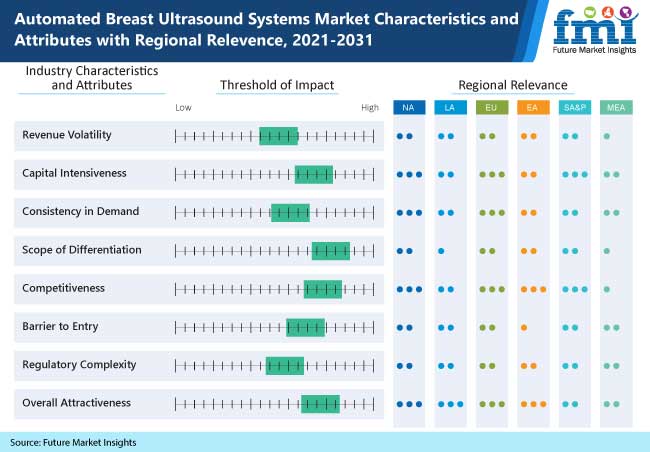 Hospitals and related services are anticipated to generate highest demand throughout the forecast period. Growing pool of patients and faster accessibility of medical tools and equipments and presence of skilled personnel will elevate the demand in Hospitals.

Key market players in automated breast ultrasound system market are focusing on installing ABUS in hospitals and diagnostics center in order to expand their global footprint. They are also working towards developing the accuracy of automated breast ultrasound system for faster assessment of cancer screening in addition to getting government approval for their products. For instance:

Automated breast ultrasound system named “AWBUS” made by SonoCiné is capable of providing repeated scans of whole breast with same consistency and accuracy necessary for accurate detection of cancer.

Future Market Insights has also analyzed the following players in the automated breast ultrasound system market in its detailed report*:

*This list is indicative - full details about the micro irrigation systems market players are available upon request.