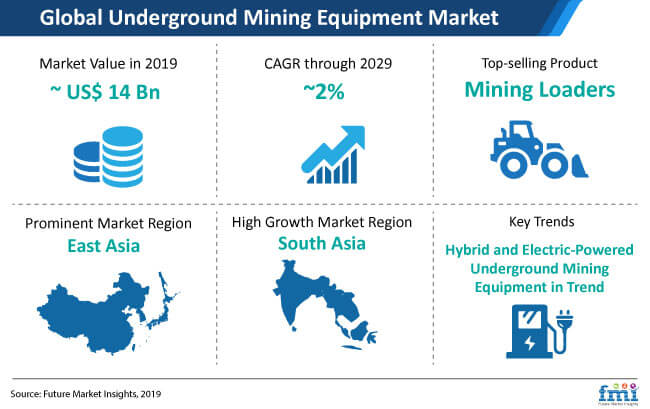 Recovery and Stabilization of the Mining Industry across the Globe

The global mining industry is cyclical in nature, which means it depends upon the performance of various further downstream end-use sectors. This makes the mining industry rely on the overall worldwide economic scenario. Relatively sluggish economic growth, growing protectionism, etc. are some of the prime factors leading to the low demand for commodities and sapped investor confidence, which, in turn, has resulting in the subdued growth of the mining industry at the global level.

However, the mining industry in Asia Pacific and Latin America, especially countries such as Brazil, Australia, and India, is expected to return to its steady phase in the coming years, thus creating opportunities for mining equipment companies, and translating the positive effect of the same to underground mining equipment manufacturers.

Operation of Equipment in Harsh Conditions Increases the Replacement Rate

In the light of rapid developments in technology, equipment manufacturers are exploring new edges that had hitherto remained untouched. For example, some underground mining equipment, such as shears, jumbo production drills, etc., face very harsh operating conditions. Hence, the life cycle of these products is comparatively short, and they need to be replaced after a specific time period. 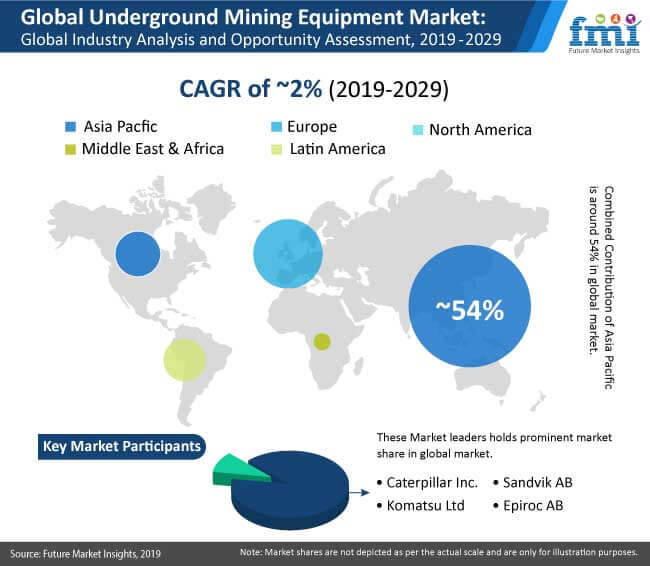 Electrification of underground mining equipment dismisses the need of ventilation shafts, thereby cutting the energy costs and reducing diesel emissions by manifolds. In addition, the companies are required to meet the Mine Safe and Health Administration (MSHA) regulations [30 CFR Part 7, Subpart E] according to which miners are supposed to employ MSHA-accepted diesel vehicles in the regions housing underground coal mines.

Furthermore, underground mining equipment have a relatively fleeting life cycle due to wear and tear in rough settings and require replacement after a definite time period, stressing manufacturers to introduce new equipment with enduring life span.

The Battle between Technological Integration and High Compliance Cost

In addition, though advanced technologies are enabling manufacturers to improve the safety of autonomous underground mining vehicles, various governing bodies, including MSHA, in the US, Canada, and most recently, in India and China, have imposed high standards and strict quality regulations. High compliance cost is thus restricting manufacturers from controlling the costs of underground mining equipment, which is reflecting in higher preference for upgrading the current fleet than purchasing new equipment.

East Asia continues to maintain its lion’s share in the market, mainly on account of upsurge in mining activities in China. The total coal mining capacity of China recorded at 3.34 billion tons in 2017 witnessed a 5.6% rise in 2018, reaching 3.53 Bn tons. The National Energy Administration (NEA) recently approved the collective launch of seven additional coal mining ventures with a capacity of 22.5 million tons per year, since the initial phase of 2019.

Introducing driverless equipment for underground mining operations with improved payload capacity is emerging as a winning strategy for market leaders, as such equipment allow for  more efficient load-and-carry operations with reduced fuel consumption. Some of the manufacturers are integrating digital technologies, for instance, 3D imagery, Internet of Things (IoT), and GPS sensing, with next-gen underground mining equipment for data collection and real-time monitoring of the larger mines with lesser accessibility.

The underground mining equipment market is anticipated to witness steady growth amid strict legal barriers over the forecast period. Manufacturers are working hard to ensure fully-automated mining operations, such as hauling and crushing, implying that automation will not remain confined to the first world mining countries.

Embracing autonomous mining and technologies, including, artificial intelligence, and machine learning, to avoid human errors and improve operational efficiency will be a quantum leap in the underground mining equipment market.

Mineworkers will utilize high-capacity fiber optic arrangement to allow equipment monitoring, thereby, improving safety and productivity in the mining area. However, some of the remote regions will still persist the use of hydraulic version of the equipment owing to the need of equipment support and maintenance of technically-upgraded machinery. Furthermore, upswing in monetary aid on R&Ds and innovations to ensure better and time-efficient mining activities will expose manufacturers to lucrative prospects.