Vitamin D Ingredients Market: Vitamin D3 to Outrank Vitamin D2 as the Most Attractive Segment in Value and Volume Terms Throughout the Forecast Period: Global Industry Analysis and Opportunity Assessment, 2016-2026

An Incisive, In-depth Analysis on the Vitamin D Ingredients Market

Request the coronavirus imapact analysis across industries and markets

The global vitamin D ingredients market is driven by several factors such as easy regulations and the separate categorization of dietary supplements from food. Vitamin D ingredients are listed under the Dietary Supplement category of FDA, which is a separate category created to distinguish these products from food. Dietary supplement manufacturers are not required to take approvals from the FDA. This category helps vitamin D manufacturers sell their products quickly in the market, without any hurdles. Before a company sells a dietary supplement, it needs to make sure that the products it manufactures are safe, that no false or misleading information is provided to customers and that it must comply with FDA regulations and that Federal Food, Drug and Cosmetic Act. As per the FDA, supplements are not intended to treat, diagnose, prevent, or cure diseases. These features are meant to be used by drug manufacturers. Despite these restrictions, vitamin D manufacturers enjoy a wormhole, which allows them to sell their products without much trouble. Regulatory bodies advertise the benefits and uses of vitamin D and the problems associated with its deficiency and intake limits, which is a major driving factor for the growth of the vitamin D ingredient market. 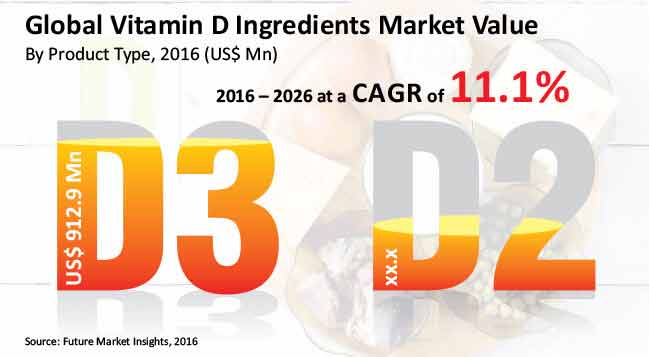 The FDA, EFSA, NIH and many other regulatory agencies or government bodies have issued recommendations on vitamin D intake for every age group and pregnant women over the past few years. These regulatory agencies have identified the importance of vitamin D intake and the problems associated with the deficiency of the same. They have started issuing recommendations on the intake of dietary supplements, especially for vitamin D, to help people achieve a better lifestyle and health.

The demand for vitamin D ingredients has been on the rise over the past couple of decades. Vitamin D ingredients are expected to witness an increase in the demand from the global nutraceuticals and functional food industry as they are among the most common micronutrients used to fortify a wide variety of food products as well as a common base for nutraceuticals, dietary supplements, cosmetics, etc.

Vitamin D ingredients are expected to find higher applications as recently researchers have discovered that vitamin D ingredients and health supplements can reduce the risk of autism in new born babies. Sufficient dosage to pregnant women can help in reducing the risk. Research on the link between autism and vitamin D started from 2008, when Dr. John Cannell of the Vitamin D Council published a paper on the same. Many researches have been conducted on the same, but significant evidence was found in December 2016, when Professor John McGrath from the University of Queensland’s Brain Institute led a research team, and found that babies of pregnant women who didn’t take vitamin D supplements were found to be more prone to autism. Thus, medicines specifically structured for pregnant women will present a future opportunity for the market.

The report also encompasses the study of existing industry trends and prospects for the vitamin D ingredients market. In order to provide users of this report with an all-inclusive view of the market, we have included a detailed competitiveness analysis of key players and their tactical overview. The dashboard offers a detailed comparison of vitamin D ingredients’ manufacturers on the basis of parameters such as total revenue, product offerings and key strategy. The study encompasses market attractiveness analysis by product type, source type, form type, application and region.

Increasing awareness among adults and consumers of other age groups around the globe regarding the various benefits associated with the application of cosmetics to fulfill vitamin D intake through skin is a major factor driving the market growth. Recent mergers and acquisitions are creating new opportunities for producers of vitamin D ingredients and are thus expected to fuel the vitamin D ingredients market growth during the forecast period.Cosmetic companies have started producing cosmetics with vitamin D ingredients as raw materials, which has revealed enormous results in the vitamin D levels of consumers. Initially, companies were adding fruit content in cosmetics, which added a hint of vitamin D in their products, but the level of vitamin D intake was still low as compared to the recommended levels by regulatory bodies. To breach this gap, companies started launching products consisting of high quantities of vitamin D, which provide sufficient nourishment and thus, promote the overall revenue growth of the Vitamin D Ingredients market.

This section of report discusses, in particular, how the global competition in the market is gradually increasing. It addresses the various dynamics that are determining internal as well as external competition in the market. Numerous obstacles to enter in the industry are analyzed and regarded on the basis of their influence on the competition level in the market.The consumption of vitamin D ingredient fortified food products is increasing around the globe, particularly in developing countries, and is one of the key drivers contributing to the progression of the global vitamin D ingredients market.

The report offers a market viewpoint for 2016–2026 and sets the forecast within the framework of the vitamin D ingredientsecosystem, comprising new technological developments as well as new product offerings in the market at a global level. This study talks about the key regional trends driving to growth of the vitamin D ingredientsmarket internationally as well as analyses the degree to which these drivers are prompting the market in each region. Key regions evaluated in this report include North America, Latin America, Western Europe, Eastern Europe, APEJ, Japan and MEA.

In the last section of the report, a detailed competitive landscape has been provided to deliver audiences with a dashboard view. Key providers covered in the report are Vitamin D ingredient producers and suppliers. In depth profiles of the providers are also included in the scope of the report to assess their long-term and short-term plans, key offerings and most recent developments.

A number of primary and secondary sources were consulted during the course of the study. Secondary sources include Factiva and Hoovers and company annual reports and publications. This report covers market dynamics such as drivers and trends influencing the segments and opportunities in the vitamin D ingredients market. The report also includes analysis and insights regarding the potential of the vitamin D ingredients market in specific regions. Detailed profiles of providers are also included in the scope of the report to evaluate their long-term and short-term strategies, the product portfolio of vitamin D ingredient manufacturers and recent developments in the market. The Dishman Netherlands BV has been being recognized as the world’s sole large-scale producer of vitamin D2 ingredients. Companies such as BASF SE, Royal DSM NV, Schiff Nutrition International, Inc. (Reckitt Benckiser), and Zhejiang Garden Biochemical High-tech Company Limited are some of the other major manufacturers of vitamin D ingredients.

Global Vitamin D Ingredients Market Value is expected to Increase from US$ 1,255.05 Mn in 2016 to US$ 3,587.51 Mn by 2026, due to the Rising Demand for these Ingredients in Cosmetic and Fortified Food Products across the Globe: Future Market Insights