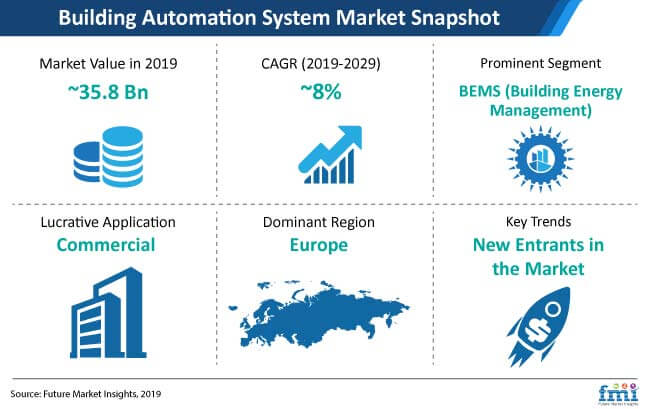 A building automation system aims at automating tasks in technologically-enabled environments, unifying several mechanical and electrical devices in a distributed manner employing underlying control networks. Building automation systems are predominantly deployed in commercial infrastructures such as malls, hotels, and other enterprise establishments or even in the domestic domain (residential).

Sustainable infrastructure is an integral part of the smart cities mission. As cities expand, it is imperative to invest in smart buildings and housing to enable cohesive development in the future.

As per the primary responses, building owners who are likely to install building automation systems in the near term, are looking to reduce the energy consumption, improve tenant comfort, security, and productivity (airflow, lighting, etc.), comply ever-changing regulations, and reducing maintenance and life cycle costs.

In the long run, the growth of the building automation systems market is anticipated to be driven by socio-economic trends, including the rapid population growth, rising affluent middle-class population, and sprawling urbanisation in India and other South Asian countries.

Europe to Remain Prominent in the Building Automation System Market 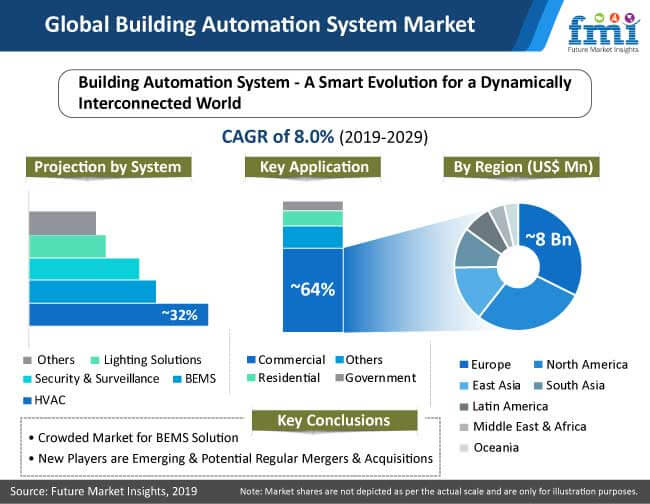 Building automation systems (BAS) have seen momentous advancements in the past century, with an objective of redefining ‘comfort’ and ‘safety’ of building occupants. The implementation of automation systems in building infrastructure is getting better with each passing year, as proliferation of technology continues at a steady pace in the AEC (architecture, engineering, and construction) industry.

From the 1950s to 1990s alone, building automation systems have come a long way from pneumatics to electronics to open protocols, and a promising debut of ‘easy-to-use’ systems will further complement this evolution. Though larger buildings continue to be at the forefront of the adoption of building automation systems, the last few years have seen ascending installations in small- and medium-sized buildings.

This, in turn, brings along a new plethora of opportunities for new entrants to start with new projects, as property owners of these buildings will remain biased toward new companies offering attractive deals over the ‘well-established’ traditional suppliers.

The Switch from ‘Wired’ to ‘Wireless’ – Unwinding New Possibilities

Companies offering building automation systems are focusing on smarter R&D investments, with an aim of coming up with the most effective, flexible, and fully-programmable wireless solution. However, the acceptance of wireless building automation systems among the property owners will be largely influenced by the marketing strategies devised by these companies, as effective marketing bridges the gap between customer needs and product capabilities.

Fast-growing economies such as Indonesia, India, and China, have spectated the metamorphosis of ‘asset digitization’ from a mere trend to an utmost necessity. Both commercial and residential spaces across these countries are being installed with multi-modal building automation systems, given that asset digitization has disrupted the AEC (architecture, engineering, and construction) industry with newer promises for building occupants and market players alike.

Additionally, the escalating demand for solutions offering real-time monitoring and alerts is also upholding the deployment of building automation systems across developing economies in Asia. This, in turn, makes Asia a promising region for market players to expand their operational bases.

Companies active in the building automation system market don’t follow the ‘one-size-fits-all’ approach, for the fact that requirements would considerably vary between buildings of different sizes. Accordingly, the market players are developing automation systems of all building types and size, with an objective of covering all the usability requirements put forth by end users.

With integration of intelligent & centralized energy management and innovative energy saving features, manufacturers are vying to offer significant cost and energy savings for the end users to reap a myriad of benefits.

The building automation system market structure reflects a fair degree of consolidation, wherein the leading players command for a nearly 60-65% of the global market share. The top 5 market players - Schneider Electric, ABB, Siemens AG, Johnson Controls Inc, and Honeywell International Inc. to name a few – account for nearly 40% market share and will continue to reap the ‘first-mover’ advantage in the global market space.

Strong portfolios and active regional presence will continue to underpin the relevance of these companies, however, bespoke innovations will further condition their growth.

How is IoT Reshaping Building Automation?

With sheer proliferation of internet connected things, ranging from cars to fitness trackers, the Internet of Things (IoT) is now increasingly known as Internet of Everything (IoE). ‘Internet-connected’ has emerged as the new normal across building structures and the installed devices, primarily pushed by a demand for enhanced connectivity.

With building managers and real estate investors having a vested interest in bringing down building operating costs and boosting related efficiencies, IoT is seeing a broader acceptance in the arena of AEC (architecture, engineering, and construction).

As compared to other industries that are on the verge of IoT disruption, the building automation system industry has a head start on this disruptor. The embodiment of web connectivity within the building automation solutions would not only offer umpteen cost benefits, but also ensure excellent risk management through prompt notifications on potential risks and dangers.