According to the analysis done by Future Market Insights, the global chilled beam system market is expected to exhibit noteworthy growth rate during the period of assessment (2017-2027). The global market has seen positive growth path since past years. During 2012-2016 period, this market witnessed a 1.2x increase in revenue.

As per this analytical research report, there is a high possibility for a higher increase in revenue during the forecast period. The global chilled beam system market in 2017 is valued at around US$ 243.0 Mn and is estimated to reach a valuation of more than US$ 450 Mn by the end of the assessment year.

The growth rate reflected by the chilled beam system market touches a higher pace and the global market is poised to register a robust CAGR of 6.4% throughout the period of assessment. This high growth can be attribute to the increasing demand for advanced and innovative cooling technologies across the globe (especially in GCC countries) and higher demand for energy efficient systems owing to stringent building energy codes.

Concealed segment in the product type category of chilled beam systems is expected to dominate the global market as it reflects high growth potential along with high market share. In 2017, this segment led the global market in terms of high value and is likely to grow in the coming years.

It is valued at US$ 129 Mn in 2017 and is estimated to reach a valuation a little under US$ 250 Mn by the end of the period of forecast. It is projected to grow at a comparatively higher pace to register a CAGR of 6.8% throughout the assessment period 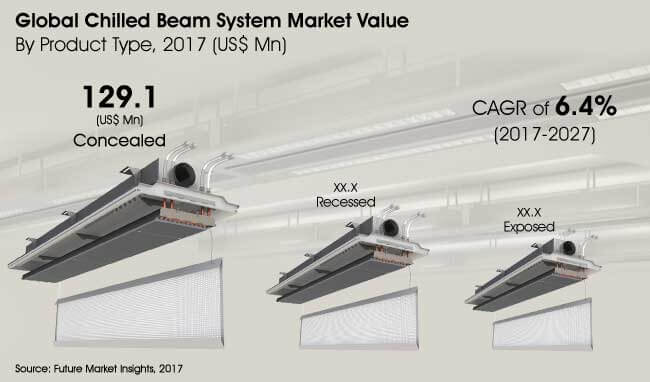 On the other hand, the active sub segment is the largest in terms of market value. By the end of 2027, the active concealed sub segment is estimated to reach a valuation of more than US$ 120 Mn from US$ 64.4 Mn in 2017. It also exhibits a significant CAGR during the forecast period.

Exposed product type segment has been experiencing slow growth pace in comparison to other product type segments. This segment is projected to grow at a CAGR of 5.8% during the period of assessment. It is estimated to reach a valuation of more than US$ 75 Mn by 2027 end.

With respect to valuation this segment is last in the line, with concealed segment to lead the global market in the coming years. The growth of the exposed product type segment is influenced by the active sub segment on a large scale. The active exposed segment is estimated to grow to reach around US$ 43 Mn by 2027 end with a 5.9% CAGR during the said period.