Decorations and inclusions are key components in the bakery and confectionery sector, which lend a unique flavour, texture, mouthfeel, colour, and other improvements to finished products such as cakes, pastries, bar chocolates, breakfast cereals, and other products.

Various types of decorations and inclusions that are produced from real and compound chocolate, sugar, fruits and nuts, flour, and other ingredients in finished or semi-finished forms are used in industrial processing, artisanal baking and confectioneries, HoReCa (hotels, restaurants, cafés), and for household uses. The global market for decorations and inclusions is estimated to account for over US$ 8 billion in revenue in 2018, growing at a CAGR of 5.9% between 2018 and 2028.

However, recent advances in coating technology, encapsulation, introduction of functional ingredient systems, and other developments have lent versatility to the use of decorations and inclusions in numerous end products. For example, Carletti uses a unique coating technology for its chocolate decorations and inclusions that enhances the freeze/thaw stability, thereby rendering them resistant to thermal shock, which is useful in end products such as ice cream and other frozen desserts.

Additionally, the use of other products with moisture content such as icings do not affect the visual appearance of the decorations and inclusions due to these functional coating materials.

Sustainable sourcing of raw materials in the bakery and confectionery sector has become a key issue for several market participants across the value chain, due to the negative environmental impact resulting from over-harvesting of agricultural produce. This is especially true for cocoa, since most decorations and inclusions are produced from cocoa.

This is in addition to the fact that Africa accounts for over 70% of the world’s cocoa bean production, and the livelihoods of African farmers are significantly impacted from crop failures or lower than expected harvest. Major buyers of cocoa for the production of decorations and inclusions, including industry leaders such as Barry Callebaut, have put several initiatives in place to ensure the sustainable sourcing of raw materials.

Additionally, independent certification schemes such as Fairtrade, UTZ, and Rainforest Alliance have ensured increased transparency in the supply chains. Buyers of cocoa and producers of decorations and inclusions benefit from including these labels and certifications in their end products, due to increased awareness by consumers towards the environmental impact of food sourcing.

In alignment with sugar reduction strategies to combat the increasing prevalence of obesity, globally, decorations and inclusions containing dried fruits are preferred due to the natural sweetness lent to the end product, as well as health benefits such as antioxidants, vitamins, minerals, and other functional health benefits. Another evolving trend is the utilization of natural sources of sugar in decorations and inclusions, moving away from processed sugar, thereby drawing the attention of health-conscious consumers all around the world. 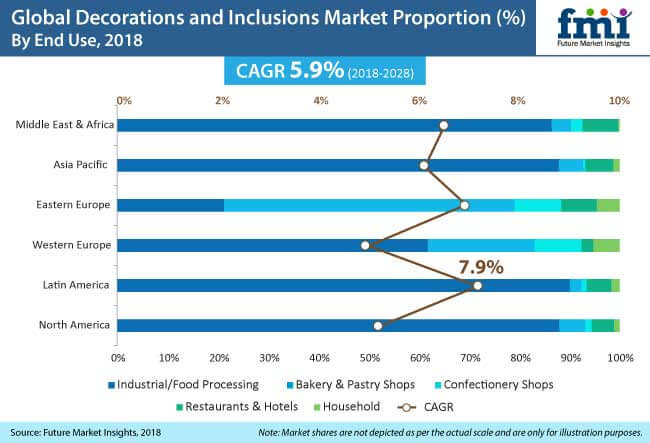 Chocolate happens to be one of the most favourite consumer products, globally, and the tailwinds from the growth in the bakery and confectionery sector are expected to enhance consumer appetite for chocolate decorations and inclusions. The increasing propensity of consumers to spend on premium baked goods has played well in artisanal bakeries’ favour, where custom products for various occasions demand the use of high quality decorations and inclusions.