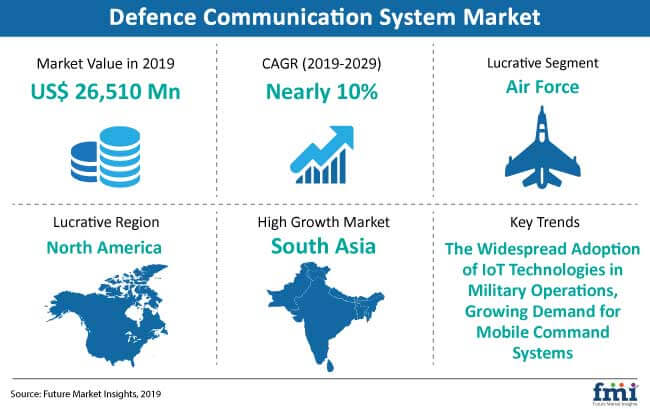 IoT in the military network environment

The widespread adoption of IoT technologies is significantly affecting many aspects of military operations. The growing number of battlefield assets are now becoming networked entities, due to capillary and high-density personal & environment sensor systems. The adoption of IoT technologies in military operations significantly benefits military intelligence, surveillance, and reconnaissance operations.

The military & defence communication systems landscape is witnessing the rise of next generation solutions. Integration of text and data capability in the traditional voice-only systems have facilitated data delivery, which range from videos and images, to mapping in the battlegrounds. Innovation across the spectrum of engineering disciplines are likely to stave off challenges in modernising defence communication systems, while enabling upgradation to future waveforms.

Opportunities for defence communication system developers remains robust in developed markets, as the technology continues to evolve past standard two-way to multiple device communication, with point-to-point wireless link having low latency. The leverage of software defined radios and interoperable communication, which facilitate operations at distinct frequencies and protocols, will further create lucrative opportunities for the market stakeholders.

The move toward switched digital services is evident in defence communication systems industry, alongside component-based advances to cater high performance requirements. Developments in the microwave radio technology, to covert transmission facilities from analogue to digital, will augur well for growth of the defence communication systems market.

What Does it Mean for Stakeholders?

The global Defence Communication System market is segmented in detail to cover every aspect of the market and present a complete market intelligence approach in front of the reader.