[285 Pages] The Rubber Tracks for Defense & Security market is estimated at US$ 118.5 Mn in 2022 and is projected to reach US$ 144.5 Mn by 2027, at a CAGR of 3.7% from 2013 to 2021. Future Market Insights (FMI) has forecasted the Rubber tracks for defense & security market to grow with a year on year growth of 4.2% in 2022. Armored personnel carriers, or commonly known as APCs, have played a critical role in military operations, providing greater protection and allowing for better infantry deployment in high-risk regions. The global business is anticipated to witness a considerable CAGR of 4.0% during the period of 2022 and 2027.

FMI has identified North America to remain key market for rubber tracks market over the forecast period owing to increasing demand for rubber tracks as a result of investments in military expenditure and need to upgrade existing military fleet. The region is estimated to witness a value growth of 5.4% in the industry of rubber tracks for defense & security market.

Between 2013 and 2021, the global rubber tracks for defense & security market expanded at a CAGR of over 3.7%. Rising demand for military vehicles across land, sea, and air platforms, upgrading military fleets by inducting newer generation vehicle platforms, and increasing preference for simulation-based training for military personnel are some of the market's significant trends. Rubber track pads of the highest quality and reliability have been constantly produced for military vehicles and other tracked vehicles for the past years but today, these tracks should satisfy all the relevant norms and conditions to use. Significant developments in track materials and track pads have introduced new versions of these products in the market. These innovations have made them weather resistant and allowed to function in a variety of battlefield environments, harsh operational situations, heavy load sustainability, adverse terrains and high-abrasion resistance

Future Market Insights expects the global rubber tracks for defense & security market to expand at over 4.0 % CAGR through 2027. 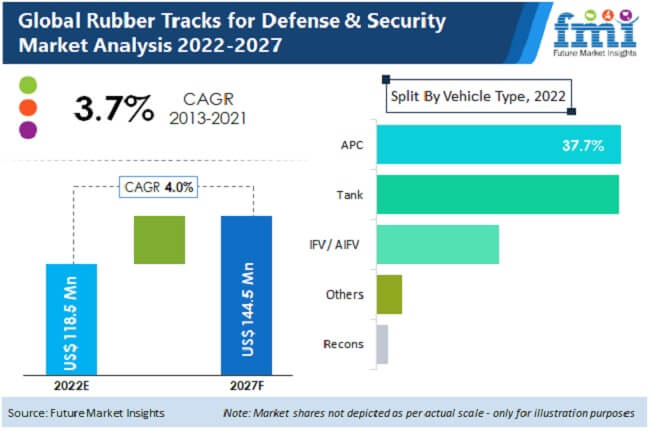 What is the potential for Rubber Tracks for Defense & Security through increase in military expenditure?

Which trends of Rubber Tracks will sustain in the forecast period?

New developments in product design are paving the market growth. Trends for robust and high-performance rubber tracks is one of the most desired requirements from end-users. Reducing vibrations, providing ride-comfort and increased service life are some of the other desired characteristics. Rubber tracks built with anti-vibration technology and novel materials are trending in the market. These trends are expected to sustain in the long run.

Which Region Offers the Largest Opportunity for Sales of Rubber Tracks for Defense & Security?

With an absolute dollar opportunity of around US$ 124 Mn, North America is expected to be the most lucrative market for rubber tracks for defense & security suppliers. It is expected that foreign countries wanting to update and expand their military vehicle fleets will provide new income streams to North American manufacturers in the coming years. Experts see potential from the region to Asia, as countries face new and persistent security threats, as well as the need to replace outdated fleets. There is a considerable growth in the companies based in the U.S. which will provide specialised and advanced vehicles in future. The region aspires to update existing vehicles/old fleet, while simultaneously developing new ones. Thousands of the vehicles are being purchased by the US Army and Marine Corps.

Which is the most lucrative market for Rubber Tracks for Defense & Security?

The market in the country of U.S. is expected to rise at a CAGR of 5.5% from 2022-2027. The U.S. remained the world's greatest spender in 2020, with a military budget of $778 billion, accounting for 39% of worldwide military spending. Focused investment in research and development, as well as the implementation of various long-term initiatives such as modernizing the US nuclear arsenal and large-scale military purchase, are to credit for the rises in the financial years 2018–20. The perceived threats to the US from strategic competitors such as China and Russia, as well as former US President Donald J. Trump's determination to build up what he considered as a depleted military, were the main drivers of recent increases. This has positively impacted the market for rubber tracks in U.S.

What is the potential for Rubber Tracks for Defense & Security in Israel?

The rubber tracks for defense & security market in Israel is expected to rise at nearly 3.5% CAGR over the forecast period. According to the Stockholm International Peace Research Institute, Israel was the 12th largest supplier in 2020, generating about USD 350 million in revenue from arms and weapon sales to 16 nations. In 2020, Israel's military budget was USD 21.7 billion, up 2.7% over 2019. Following the unveiling of the Momentum Plan in 2019, an ambitious multi-year initiative aimed at restructuring Israel's military assets and capabilities, the 2020 increase was announced. Due to these factors, the country is expected to be a lucrative market for rubber tracks. Israel is expected to create an absolute dollar opportunity of USD 14 Mn from 2022-2027.

Why is Demand for Rubber Tracks for Defense & Security increasing in the Russia?

Demand in the market of Russia is expected to rise at nearly 4.9% CAGR over the forecast period, from 2022-2027. The investments in defense activities have significantly increased over the past few years. The country is also one of the leading manufacturers of military warfare and it exports most of its produced defense equipment to global markets. According to the country’s defense initiatives, it has begun serial production of third generation main battle tanks (MBT) in 2020, to be deployed to its Southern and Western military districts. These driving factors support the market growth in Russia, for rubber tracks.

What is the future potential of rubber band tracks in Rubber Tracks for Defense & Security market?

Band tracks, also commonly referred as rubber endless tracks, highly differ from conventional steel tracks and provide advantages. They are usually used on armored vehicles and nearly weigh 45% of steel tracks thus considerably reducing weight. These tracks considerably reduce vibration up to 60%, noise levels by 6-10 decibels and have higher durability than steel. They are friendlier to the road surface and provide better fuel economy. This segment is expected to create an absolute dollar opportunity of USD 136 Mn from 2022-2027.

Which vehicle type makes most value from Rubber Tracks for Defense & Security?

The IFV/AIFV or commonly known as Infantry Fighting Vehicle segment is expected to create an absolute dollar opportunity of USD 63 Mn from 2022-2027. The deployment of IFVs has increased from the past few years due to several factors including protection against threats, effective weapon against enemy forces, its capability for both on-road and off-road mobility and ability to have a strong crew capacity.

What is the preferred payload of Rubber Tracks for Defense & Security?

The vehicle payload, 15 to 45 tons is expected to be the most preferred payload for rubber tracks. The segment is expected to grow at nearly 4.5% CAGR over the forecast period.  The payload offers maximum benefits to end-users with its robust nature of usage. Several companies will be focusing to aim the heavy-load vehicle segment, since the adoption rate of rubber tracks has considerably grown in heavy-load vehicle applications.

Rubber tracks for defense & security is a moderately consolidated market with the top players holding nearly 45-50% of the global market. The companies want to diversify their product portfolio by focusing on novel technologies such as composite materials and specific track requirements from loaders. The companies aim to develop cutting-edge solutions during the entire life cycle of product, from the design & inception phase to the end of is service life. They also strategically locate their main factories in emerging markets to make it ideal to service the developing markets. The companies are engaged in collaborations to meet target markets and collectively serve the market needs.