Rise in sales of two wheelers has gained momentum across the world. According to European Association of Motorcycle Manufacturers (ACEM), the number of motorcycles registered in EU was 830,694 units in the first nine months of 2018. In Asia Pacific, sale of two wheelers, especially in India (which has emerged as the largest two wheeler market in the world) has increased giving considerable tailwind to the driving protection gear market.

As per Society of Indian Automobile Manufacturers (SIAM), the domestic sales of two wheelers in India has seen a stupendous rise pushing the market to greater heights at a CAGR of 7.9%.

Significantly lower prices are proliferating sales of driving protection gear on online portals. Between 2002 and 2010, U.S., saw a near six-fold increase in the number of riders purchasing helmets online (from 4.0% in 2002 to 23.0% in 2010). Women are increasingly swaying toward motorcycle riding. Thus there has been a steady uptake of driving protection gear within this segment.

According to the latest survey conducted by Motorcycle Industry Council (MIC), one in five motorcycle owners is a women, compared to one in 10 a decade ago. Motorcycle ownership among women has gone up 9% from 10% in 2009 to 19.0% in 2018. Women are spending close to US$ 574 a year on protection gear and motorcycle maintenance as compared to US$ 497 by men.

Increasing sales of motorcycles and stringent traffic laws have created demand for driving protection gear in almost every country. However, the global driving protection gear market is primarily concentrated in Europe, North America, and Asia Pacific including East Asia and South Asia. Asia Pacific sales have surpassed those of Europe and North America while East Asia is expected to hold the highest CAGR (~7.0%) during the forecast period, 2019-2029 owing to high sales of motorcycles in China and Japan. 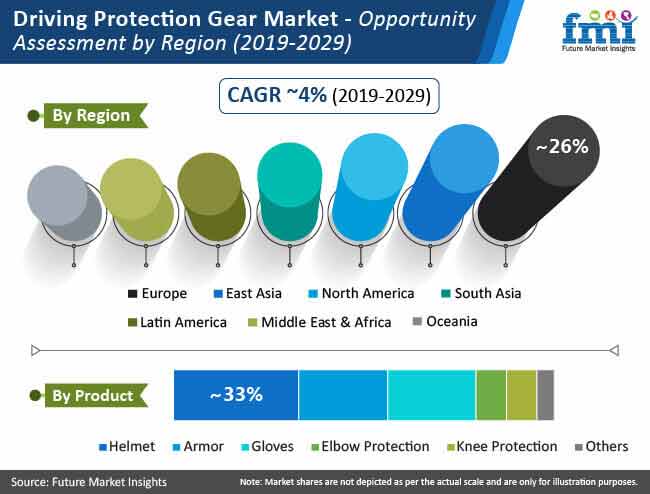 In recent years, the growth of middle class and high-end consumers have been recorded in the Asia Pacific, which, in result, creates demand for premium products in the driving protection gear market. Currently, the middle class or upper-middle-class population is estimated at around 150 million in the Asia Pacific and is expected to grow by 100 million in the next few years. The helmet penetration rate in India is very low, close to 2.5% as 85% of the market is unorganised. This also presents an opportunity in driving protection gear market with increasing middle and upper middle class population.

Studds Accessories limited, a helmet manufacturer showed its sales data which represented its annual sales of helmets are higher for premium segment as compared to the regular one. In 2018, the company sold 27.79% of premium helmets in India whereas regular helmets market share was only 25.66% in 2018. In an independent survey, Arai, Icon, and Shoei are named as the top three premium helmets in motorcycle helmet satisfaction study.

Europe currently leads the global driving protection gear market with slightly over a fourth market share. Increasing sales of high-capacity motorcycles are substantiating the market growth in the region. The market in France and Italy is expected to collectively generate revenues worth of over a billion by 2029 end. Sales of driving protection gears are also notable in North America owing to increasing sales of mid and high-capacity motorcycles as well as rising motorcyclist mortalities.

However, there are strong indications of East Asia and South Asia surpassing Europe and North America in the following years, respectively. Strict traffic laws, and swelling motorcycle production in India, China, Indonesia, and Vietnam could particularly contribute to market growth in this region.

Product Innovation at its Peak

In a bid to offer enhanced protection to riders, market players are developing driving protection gears with a blend of innovation. Smart helmets, integrated with multi-directional impact protection system (MIPS), are beneficial in negotiating rotational motion. Some smart helmets are equipped with features, including front & rear cameras, live map, and head-up display. Further, manufacturers are launching innovative gloves that allow riders to use their smartphones via Bluetooth.

The global driving protection gear market is segmented in detail to cover every aspect of the market and present a complete market intelligence approach to readers. The segmentation has been done as per product, material, vehicle, consumer group, distribution channel and region.