According to the research report on global electronic trial master file (eTMF) market, it is expected to show exponential growth during the period of forecast, 2017-2027. The global market had witnessed high growth since the period 2012-2016 and this trend is likely to enhance in the coming years, till 2027. The global electronic trial master file (eTMF) market is estimated to reach a value more than US$ 190 Mn by the end of the assessment year from an estimate of US$ 51.7 Mn in 2017.

This market valuation is supported by a high CAGR of 14.0% during the period of forecast. The high growth of the global electronic trial master file (eTMF) market can be attributedto growing number of clinical trials across the globe and government regulations keeping the eTMF mandatory for clinical trials.

The North America region is expected to show high market attractiveness during the forecast period. Electronic trial master file (eTMF) market in North America is projected to grow at a high CAGR of 13.5% throughout the period of assessment to showcase an estimation of more than US$ 125 Mn by the end of the assessment period. The market in this region has been growing consistently showing high revenue generation since 2016. In 2017, the North America eTMF market reflected a higher revenue of about US$ 35 Mn and dominated the market in other regions that reflected a revenue not even close to US$ 15 Mn.

The main aspect driving the growth of the eTMF market in North America is the business benefits associated with eTMF that are spurring its adoption. For instance, in 2016, Veeva Systems conducted a survey, in which it was said that improving inspection readiness (67%), speeding study start-up (53%), and providing remote oversight of the TMF (48%), are the most cited business benefits driving the adoption of eTMF among sponsors. 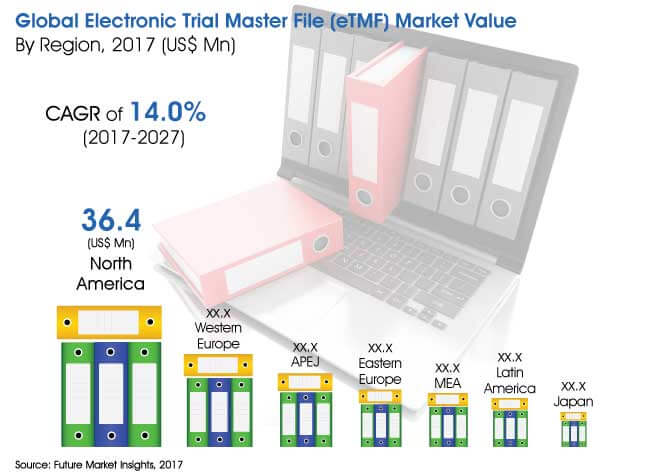 United States sub region in North America is expected to highly contribute to the growth of the market in the region, followed by Canada. The revenue from United States is expected to reach a high valuation of more than US$ 100 Mn by the end of 2027, thus supporting the dominance of the North America region in the electronic trial master file (eTMF) market in the coming years.

Electronic trial master file (eTMF) market in Asia Pacific excluding Japan (APEJ) region is expected to grow at the highest pace in the coming years to register a stellar CAGR of 17.6% and is estimated to reach a valuation of about US$ 18 Mn by the end of the period of assessment, thus becoming the third largest region in the eTMF market after Western Europe.