The female pelvic implants market will reach a valuation of US$ 245 Mn in 2021, according to the latest Future Market Insights (FMI) analysis. The overall sales outlook remains positive with female pelvic implant demand forecast to total US$ 322.6 Mn by 2031, as the market continues to exhibit growth at a CAGR of 2.8% between 2021 and 2031.

According to Future Market Insights (FMI), the demand for female pelvic implants has grown at a 2.5% CAGR between 2016 and 2020. According to the Division of Female Pelvic Medicine and Reconstructive Surgery in the Northwestern University Chicago, women with normal life expectancy have an average 30–50% chance of developing pelvic organ prolapse.

Approximately 19% of these women need to undergo at least one surgical intervention for POP or SUI and 30% of them undergo reoperation for recurrence. Despite such high prevalence, there is no definite cure or restoration of anatomical defects for pelvic organ prolapse or stress urinary incontinence. Over the past two decades, attempts have been made to improve the outcomes of surgery. 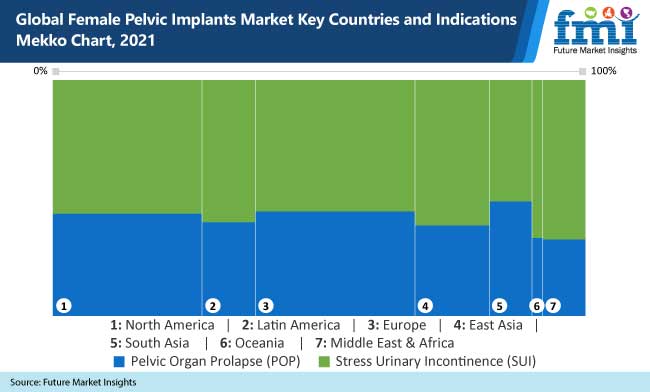 However, the majority of such efforts have resulted in the use of vaginal mesh and grafts. So far, surgical options with mesh implants and slings are proving to be the best option for such disorders which imply a heavy social and economic burden. Other surgical options such as allografts and xenografts are costly and carry the potential of transmission of infectious disease and synthetic meshes.

Thus, the market for female pelvic implants is expected to see continuous growth in the use of mesh and sling implants until definite alternatives are available for these products.

Future Market Insights expects the global female pelvic implants market to rise at 2.8% CAGR between 2021 and 2031.

How will the Market Gain from Novel Tissue Engineering Launch for Female Pelvic Floor Reconstruction?

Ongoing post-marketing surveillance of approved devices and the introduction of novel tissue engineering in female pelvic floor reconstruction creates huge opportunities in the female pelvic implants market. The majority of manufacturers are selling their products in the global market despite strict regulations.

After Food and Drug Administration (FDA) reclassification of vaginal mesh implants from Class II to Class III medical devices, the FDA has advised 33 manufacturers to conduct 3-year studies to assess the impact of organ damage and other complications of mesh implants. After assessing the risks, the manufacturers can reintroduce their devices and can get pre-market approval from the FDA.

This allows manufacturers to re-launch mesh implants, which is expected to enter the market by 2022. Similarly, the introduction of novel tissue engineering with growth factors, biomaterials, and drugs implanted into tissue damage or loss is set to boost repair time, stimulating the regeneration of damaged tissue.

Studies initiating tissue engineering for pelvic organ prolapse have reported the use of novel designed knit material fabricated from FDA?approved non-degradable polyamide dip?coated in gelatin for MSC seeding and delivery. Polypropylene mesh commonly used in clinical practice has good mechanical properties, but there are long?term complications. This validates the need for tissue engineering technology in the treatment of pelvic organ prolapse and promotes an innovative approach to pelvic implantation.

What are the Factors Restraining Demand for Female Pelvic Implants?

As per the USFDA, the transvaginal placement of surgical mesh can be risky in women with POP mesh complications. Some of the common complications reported include mesh erosion, infections, vaginal scarring, discomfort and pain during sex, and even resurgence of urinary incontinence.

Through January 31, 2019, over 139,000 adverse events have been reported for mesh products of which over 69,000 events were reported for POP mesh products, as per FDA, 2020. This restricts the patients from taking surgeries to implant vaginal mesh, thereby deterring market growth. This growing awareness towards surgical complications is curbing patients from opting for vaginal mesh implants in the high growth markets of Europe and the U.S.

What is the impact of the COVID-19 Crisis on the Female Pelvic Implants Market?

There are several long-term and short-term impacts on the industry caused by the COVID-19 crisis. Some industries have shown no impact on their sales while some have been adversely hit. The medical device industry is hampered due to supply chain disruption in the 1st quarter of 2020.

How is the Female Pelvic Implants Market Faring in the U.S?

The U.S. holds over 83% share of the female pelvic implants market in North America. According to the Association for Pelvic Organ Prolapse Support, about 34 million women suffer from pelvic organ prolapse (POP) across the globe currently.

In the U.S., approximately 15 million people are suffering from SUI. Thus, the rising prevalence of pelvic organ prolapse and stress urinary incontinence is driving the U.S. female pelvic implants market.

How is Support for Women Post-Operation Driving Demand for Female Pelvic Implants in the U.K.?

The U.K. market accounts for over 13% of the Europe market through the assessment period ending in 2031. The governments of various countries of Europe like the U.K. are forming committees that can address the issues of women suffering from peri-operative complications of surgeries for pelvic implants. These programs are expected to raise awareness among the patients, hospitals, and GPs and can increase the penetration of female pelvic implants over the forecast period.

For instance, hospitals in the U.K are forming a multidisciplinary team (MDT) consisting of specialists from urogynecology, urology, radiology, pain management, and more, to provide advice and treatment. This MDT assesses complications and advises the patient if surgery to treat mesh complications is needed.

What is the Scope of Growth of Female Pelvic Implants Sales in the India Market?

The India market accounts for more than 30% of the sales registered in South Asia in 2021. Most developing countries have patients that are not aware of conditions such as pelvic organ prolapse and stress urinary incontinence.

Perception of pain associated with surgery evokes considerable anxiety in patients resulting in reluctance to consider surgical options to cure SUI or POP. Many women delay or do not seek treatment for these diseases in India due to a lack of awareness, which is foreseen to be the biggest challenge for the growth of female pelvic implants in the Indian market.

What Factors are Driving Revenue Generation in the Australia market?

The market for female pelvic Implants in Australia is exhibiting a 2.8% CAGR and is projected to account for more than 86% of the Oceania market throughout the projection period. Growing government initiatives to create awareness is anticipated to boost growth in the region.

For instance, the Australian government has developed the Continence Aids Payment Scheme (CAPS) to support patients with severe incontinence problems. Furthermore, professionals, such as urologists, urogynecologists, gynecologists, nurses, and other skilled organizations have actively promoted awareness of urinary continence in all care settings.

A growing number of awareness programs, regarding pelvic floor diseases and the increasing incidence of urinary incontinence (UI), by different government and non-profit organizations are fueling growth.

Why are Vaginal Sling/Tapes Key to Revenue Generation?

Vaginal sling/tapes have a higher potential for growth. The segment is likely to grow with a relatively high CAGR of 2.5% in the near future. Vaginal sling/tape implants are generally made from a narrow ‘tape’ of polypropylene mesh which is placed under the urethra like a sling or hammock to keep the urethra in the correct position.

Vaginal slings have been in the market for about 20 years and can be implanted in half-hour. The minimally invasive surgical procedure under local anesthesia is preferred for outpatient applications. Owing to these advantages, demand for vaginal sling/tapes is increasing during the forecast period.

The demand for female pelvic implants is likely to witness strong growth on account of the prevalence of stress urinary incontinence and rising awareness among women regarding treatment options on a global scale.

What is the Scope of Sales across Hospitals?

Hospitals are currently the leading end users of female pelvic implants with a 2.2% CAGR through the forecast period. Similarly, hospitals can impact higher investment abilities and capital, with the surge in the number of emergency admissions, which will enhance growth prospects for the long term.

Manufacturers are primarily focusing on developing new products to bolster the acceptance of female pelvic implants, thus anticipating the surge in sales figures. The companies are focusing on outsourcing the production of female pelvic implants to reduce manufacturing costs, thereby challenging the market with reduced costs. Key players are entering into collaborations, partnerships, mergers and acquisitions to expand their product portfolio and global market.