The demand for electrical stimulators will remain high and is expected to increase at 9.1% CAGR, over the assessment period. Despite COVID-19 induced disruptions, growth trajectory remained positive as the market registered 7.4% year on year growth in 2021.

FMI predicts the pelvic floor stimulators sales to record surge at 8.8% CAGR between 2021 and 2031 as against sales growth at 4.8% CAGR registered in 2016-2020.  Demand will continue rising in response to the rising cases of urinary incontinence around the world.

According to sources from the National Association for Continence (NAFC), around 200 million adults are suffering from some form of urinary incontinence worldwide. It further states that the condition is more common in women and states that the U.S. accounts for 25 million adult patients, with up to 80% being women. 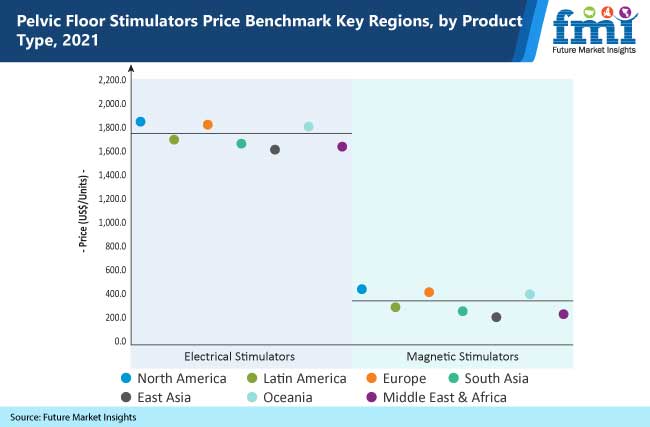 Similarly, the growing incidence of diabetes and hypertension is a major factor increasing the number of patients suffering from urinary incontinence. This in turn is driving the demand for pelvic floor stimulators. FMI has predicted the demand for female stress urinary incontinence treatment devices to gain considerable momentum in the near future. This will in turn present opportunities for pelvic floor stimulators market players to capitalize on.

According to a report published by the World Health Organization (WHO) in 2019, about 1.13 Bn people have hypertension. Diabetes is the leading cause of advanced renal failure, followed by hypertension, which affects about one billion people worldwide.

Pelvic floor stimulators are often administered to offer advanced care to patients suffering from end-stage renal diseases. FMI sees this as a chief growth driver of the market.

Coupled with this, technological advancements reported in the healthcare sector besides rising emphasis on non-invasive treatments will pave the way for expansion of the market in the coming years.

Non-invasive treatments also stimulate muscle pathways and nerves without requiring active patient involvement, which is expected to drive the demand during the forecast period.

New products are being integrated with Bluetooth to connect with smartphones for real-time progress tracking, without the risks of surgery or adverse effects associated to treatment. In February 2020, Atlantic Therapeutics (Ireland), received a clearance from the FDA allowing the wearable electric muscle stimulator device to be sold over-the-counter for treating stress urinary incontinence.

These developments will remain crucial for the market, enabling pelvic floor stimulator manufacturers to up their game in the coming years.

What Opportunities Can Manufacturers Leverage Through Telehealth?

Adoption of telehealth facilities for pelvic floor care is expected to create attractive opportunities for manufacturers. Advent of telemedicine has improved access to care, enhanced resource productivity, and reduced costs related to traditional office visits in a wide array of fields in medicine.

Top healthcare institutes are adopting telehealth for the convenience of patients to discuss problems of pelvic floor dysfunction and other related disorders. With telehealth, HCPs could interact with patients while they are sequestered in their homes. Hospitals like UCLA are now focusing on teleconsultation to reach people in this pandemic to provide support.

What are the Factors Restraining Demand for Pelvic Floor Stimulators?

Despite the social and financial burden of urinary incontinence, fewer than half of women with significant PFD symptoms pursue treatment. Besides this, women often feel personal embarrassment, being unaware that PFDs are medical conditions and that treatment options exist. Lack of awareness will continue restraining growth in the market.

Other insurers place a cap on the number of visits they will cover per year. Affordability is a major problem for a huge chunk of the population due to the absence of health insurance and government support policies that cover treatment in developing countries such as India and China. This absence of social health insurance along with the exclusionary provision of private health insurance schemes is a major factor limiting the pelvic floor stimulators market.

What is the Impact of the COVID-19 Crisis on the Pelvic Floor Stimulators Market?

The outbreak of coronavirus has pushed healthcare authorities to encourage the use of digital technologies. Despite legal and ethical issues, most medical experts claim that telemedicine is a potential source of health care during global pandemics.

The pandemic is expected to have a low impact on the overall growth of the global pelvic floor stimulators market. Although, offline consultation sessions with physiotherapists and other medical experts are likely to observe a significant decline, thus enhancing virtual or online consultations.

What Factors Support Sales of Pelvic Floor Stimulators in the U.S.?

The U.S. holds over 76% share of the pelvic floor stimulators market in North America. As per the Department of Health and Human Services of the U.S., urinary incontinence is observed to be twice as common among women when compared with men.

This can be attributed to childbirth, pregnancy, and menopause. Urinary incontinence is not a normal part of ageing, and it can be treated. Over the last decade, electrical stimulation has developed as one of the most advanced and unique types of biofeedback that can be used for pelvic floor muscle rehabilitation in the U.S.

Furthermore, the growing inclination toward research and development to find a cost-effective and efficient pelvic floor exercise method and rising focus on first-line conservative management programs for women suffering from urinary incontinence are major factors likely to fuel the adoption of pelvic floor stimulators in the U.S. during the forecast period.

How is the Pelvic Floor Stimulators Market Faring in the U.K.?

The U.K. accounts for over 25% share in Europe market through the assessment period ending in 2031. High prevalence of urinary incontinence, the surge in adoption of technologically advanced products, a large base of medical devices companies, and a huge number of pipeline products drive demand.

The market in the U.K. is likely to expand at a high CAGR of 8.7% during the forecast period. Around 6 million people in the U.K are suffering from urinary incontinence, according to the National Health Service (2017).

What is the Scope of Growth for Pelvic Floor Stimulator Production in India?

The Indian market accounts for more than 55% of the sales registered in South Asia in 2021. Various factors such as growing investment by leading players, increasing government spending and awareness programs by various government and non-government organizations are driving market growth.

The Urological Society of India enlisted guidelines for increasing awareness about urinary incontinence in the country. Furthermore, increasing healthcare expenditure due to the pandemic has a created greater scope for adoption, and the growing population makes it a promising market in the coming years.

What Factors are Driving Revenue Generation in the Australia Market?

The market for pelvic floor stimulators in Australia is exhibiting a 10.6% CAGR and is projected to account for more than 83% of the Oceania market throughout the projection period. Increasing government initiatives to create awareness is anticipated to boost the market growth in the region.

The Australian government has developed the Continence Aids Payment Scheme (CAPS) to support patients with severe incontinence problems with their needs. They have also launched National Continence Management Program to increase awareness about numerous bowel and bladder health problems.

Why is the Demand for Electrical Stimulators Rising?

Furthermore, the growing inclination toward research and development to find a cost-effective and efficient pelvic floor exercise method with a rising focus on first-line conservative management programs for urinary incontinence in women are key factors that are likely to fuel the adoption of electrical stimulators during the forecast period.

Urinary incontinence is considered a significant health problem globally. It has a considerable economic and social impact on individuals and society. The rapid expansion of the geriatric population base is among the primary aspects leading to the increase in pelvic floor disorders.

As per estimates by the UNU (United Nations University), the percentage of the geriatric population above 65 years of age is expected to rise to 16% by 2050 from 7% in 2000. Thus, the rising prevalence of urinary incontinence among elderly women in several regions of the world has played a significant role in driving the demand for pelvic floor stimulators.

What is the Scope of Growth for Distribution through Hospitals?

Hospitals are currently leading the market, with significant growth in the pelvic floor stimulators market with a 9.2% CAGR in the forecast period. Similarly, hospitals can impact higher investment abilities and capital, with improved admittance to cutting-edge technologies and patient care, which will enhance market growth in the long term.

Manufacturers in the pelvic floor stimulators market are primarily aiming to carry out strategic collaborations while investing into research and development to consolidate growth in a competitive and fragmented market. Key players are also engaged in expanding their global and regional presence through product launches, acquisitions, expansions, and upgrading distribution channels to penetrate the pelvic floor stimulators market.