Pelvic floor disorders are the significant public health issue irrespective of age or gender. It consists of a group of disorders resulting in pelvic pain and discomfort. Symptoms associated with the disorder include constipation, alteration in bowel movements, frequent urination, muscle spasms and pain in the pelvic region.

Urinary incontinence followed by faecal incontinence is the most common pelvic floor disorder. The disorder usually affects women more than men as almost one quarter of women face pelvic floor disorder according to the National Institute of Health. The condition gets more common when the person becomes older. The exact prevalence of this disorder is unknown but its impact on the healthcare system is substantial.

As the pelvic pain is related to the reproductive system, urinary tract and the digestive system, consultation of more than one doctor is required to diagnose the disorder in a proper way. The treatment of pelvic floor dysfunction can be done by a variety of experts, such as urogynecologists, urologists, colorectal surgeons, gastroenterologists and physical therapists. 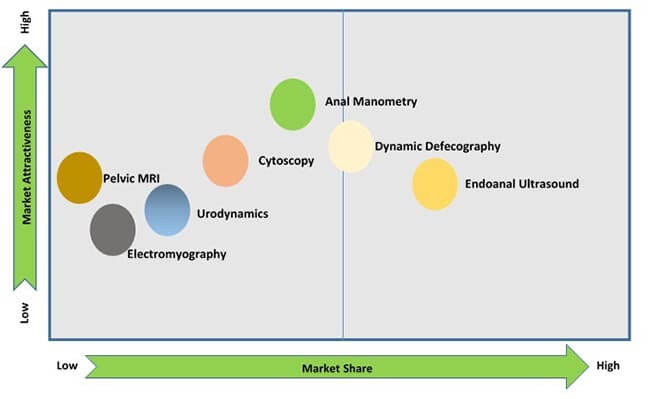 Various factors are associated with the growth of the pelvic floor diagnostic testing market such as rising prevalence of the disease, availability of advanced diagnostic instruments, increasing geriatric population as well as growing awareness. Along with this, launch of several pelvic health care programs by the government to spread awareness about the disorder and the opening of specialty diagnostic and treatment facilities also contribute to the market growth.

The major factors hampering the growth of the market are under diagnosis of the disease due to the associated social taboo with the disorder and lack of proper diagnostic facilities in most of the developing and under-developed countries.

Governmental and non-governmental organizations are playing an important role to spread awareness regarding pelvic care and the opening of specialized diagnostic and treatment centers. Some of them include Urogynecology and Pelvic Health Institute in India in 2015, Multidisciplinary Diagnostic and Treatment Center for Pelvic Floor Issues by Memorial Hermann Memorial City Medical Center in Houston, U.S. in 2016, and opening of Florida Institute for Pelvic Health and Incontinence by Capital Regional Medical Center in 2015.

Likewise, Europe with EU5 has a high share in the market due to high prevalence of the disease and availability of large number of service providers in the region. APEJ is anticipated to have significant growth in the global pelvic floor diagnostic testing service market with the improvement in diagnostic services as well as increasing medical tourism in the region.

Eastern Europe followed by the Middle East & Africa is expected to represent sluggish growth over the forecast period due to the lack of medical infrastructure facilities compared to the overall population.Competition Outlook

The report covers exhaustive analysis on

The market sizing of pelvic floor diagnostic testing will be done by procedure-based triangulation approach. The demand-side approach will be followed to assess the actual market size of pelvic floor diagnostic testing. Secondary research will be used in the initial phase to identify the feasibility of the target services and its respective segments in end-use facilities and the future impact of new technologies.

Each piece of information will be eventually analyzed during the entire research project, which builds a strong base for the primary research information.

You will receive an email from our Business Development Manager. Please be sure to check your SPAM/JUNK folder too.