The Glass tempering system market value generated from the architectural segment is estimated to be valued more than US$ 65 Mn by 2017 end and is projected to reach close to US$ 95 Mn by the end of 2027 while expanding with a CAGR of 3.6% over the forecast period. In terms of value, the architectural segment alone is expected to capture more than 70% of the market share in 2017 end. 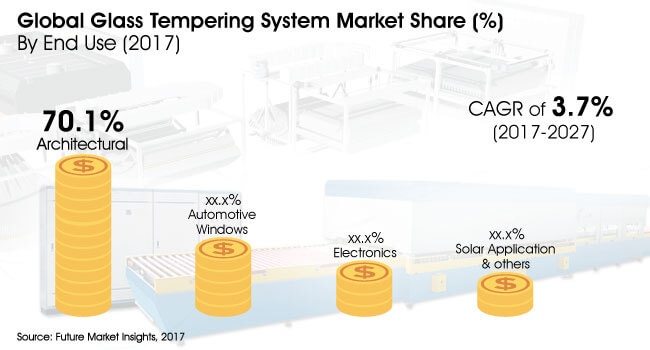 Requirement of huge investments to set up glass manufacturing industry is one of the prominent restraints that can adversely affect the growth of the glass market in the upcoming years. Moreover, continuous innovations are required to maintain competitive advantage and to generate new applications in the glass industry. This factor is also responsible for huge investments, which in turn, is expected to hinder the growth of the glass tempering system market in North America.

The slow rate of recovery after an economic crisis in Mexico in 2009 is likely to decelerate the demand growth of glass. The Mexican economy is vulnerable to the U.S. economic trends. Hence, substantial changes in consumer spending are likely to hamper glass consumption in the furniture segment.

Additionally, national consumption of glass furniture in Mexico is steadily decreasing. Widespread unemployment and high inflation are some of the other factors that are hampering the growth for the glass tempering system market in Latin America.

While glass sub-sectors are highly automated, some are still labour intensive. Stringent regulations regarding material handling is responsible for potential competitive losses for the Western European manufacturers as compared to companies located in regions with less stringent rules.

In Eastern Europe due to the economic crisis, the purchasing power has come down drastically and subsequently, the demand for new real state and infrastructural development has also been suffered. All these factors are creating obstacles in the growth of glass tempering system market in Europe

There are many types of glasses available in the MEA glass market and the investment in research and development of glass is still going on to make it better and effective for more applications. But consumers are not aware of the type of glass and its advantages. This lack of awareness can act as a restraint to the growth of glass tempering system in MEA market.

The market value generated from the sales in the global glass tempering system market is estimated to be valued close to US$ 95 Mn by 2017 end and is projected to reach little more than US$ 135 Mn by the end of 2027 while expanding with a CAGR of 3.7% over the forecast period. The incremental opportunity created by the Global glass tempering system market over the forecast period is expected to be close to US$ 45 Mn.

The market share of Glaston is approximately 30% in the U.S. Through its continuous product development and regularly renewed product, the company is looking to further strengthen its position and competitiveness in the market as well as in new machine sales and services. In order to expand business and increase the market share, the players in the U.S. market will be targeting opportunities into new segments and areas such as development of smart glass.