Growing demand for aircraft refurbishing and space optimization in aircraft will create novel opportunities for aircraft cabin interior market growth. According to FMI, the market is forecast to grow at a CAGR of 2.70% between 2021 and 2031.

Increasing research and development and incorporation of high tech products like internet of things and AI is further boosting the global aircraft cabin interiors market sales.

COVID-19 pandemic hampered the aviation industry due to imposition of lockdown and suspension of domestic and international flights across the globe. Increase in overall weight of aircraft, stringent safety regulations and absence of profitable airline services in emerging companies are hindering the market growth. 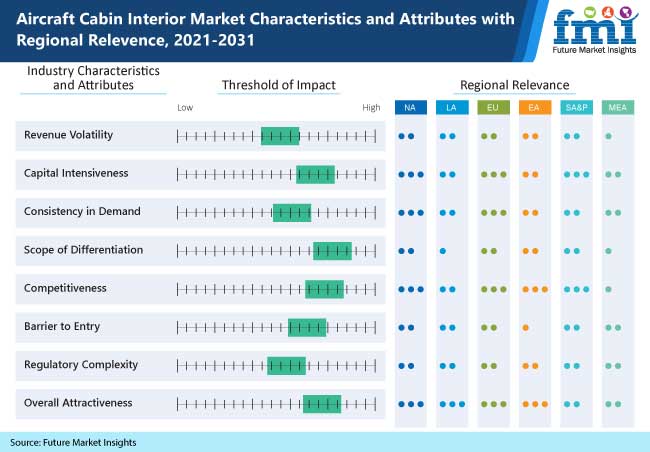 According to International Monetary Fund, global economy is forecast to grow at 6% in 2021. As economic growth elevates the standard of living and purchasing power of people, the air travel is expected to increase significantly. Increasing profits and substantial growth experienced by aerospace industry has fueled the demand for economic and comfortable aircraft cabin interiors.

Expanding fleet size of commercial aircrafts and high demand for customized interiors will drive the growth of the aircraft cabin interior aftermarket sales.

The world is witnessing increasing air passenger traffic due to increased standard of living and growing affordability of air travel. Heavy air traffic has led to high demand for aircrafts which in turn is fueling the production of aircrafts.

Why Is U.S Dominating the Global Aircraft Cabin Interior Market?

The U.S. is the leading manufacturer of aircrafts backed by the presence of skilled and educated workforce, developed distribution systems, and favorable national policies. Presence of leading aircraft cabin interior market players and aircraft manufacturers in the country will drive the market growth.

The U.S. made aerospace components are required to pass through Federal Aviation Administration’s (FAA) standard of aviation safety. FAA approved components are considered to provide superior safety. Increasing worldwide confidence on US made products will boost the aircraft cabin interior market demand.

According to International Air Transport Association, air transport and air tourism contributes around US$ 779 Bn annually. Growing network of airports and increasing foreign direct investments will drive the growth in demand of aircraft cabin interiors during forecast period.

What Are The Factors Driving Aircraft Cabin Interior Demand In The Russia?

According to the report published by the International Air Transport Association, around 1.8% of Russia’s GDP is backed by air transport sector and foreign tourists arriving by air. Increasing domestic and international traffic will create opportunities for aircraft cabin interior market growth in Russia.

Bulging fleet of foreign built aircrafts in Russia has elevated the demand for regular servicing, maintenance, and overhauling of multiple components. Shortage of man power capable of servicing such western aircrafts will drive the aftermarket aircraft cabin interior sales in Russia.

Increasing research activities through dedicated aviation centers in Russia along with thriving aviation industry across Europe is providing attractive opportunities for aircraft cabin interior manufacturers in the long-term.

How Will Aircraft Cabin Interior Market Growth Unfold in China?

Sales and production of aircraft cabin interiors in China is anticipated to increase significantly owing to booming domestic and civil aviation industry in the country coupled with government initiatives towards expanding its network of airports.

The government in China is also investing towards developing its own narrow body aircrafts, which is leading to promising market for aircraft cabin interior market growth.

The inclination of the manufacturing industry towards setting up manufacturing facilities in China due to low cost and improved manufacturing capabilities will augment the aircraft cabin interior market growth.

The India aviation industry is offering lucrative opportunity for aircraft interior market growth. According to the India Brand Equity Foundation, the spending power of Indian passenger is anticipated to reach up to US$ 136 Bn by 2021. To cater such high demands in air travel, India will require 2,380 new commercial airplanes by 2038.

However, the air transport is still unaffordable to a majority of the population but growing government initiatives and rising per capita income of the people will promote adoption of air transport, thus driving the aircraft interior market growth during the forecast period.

According to Press Information Bureau, government of India is planning to reduce custom duty on aviation sector components or parts, including engines, for manufacturing of aircraft by Public Sector Units of Ministry of Defence from 2.5% to 0%. Such measures will promote the growth of aviation industry, ultimately boosting the aircraft interior market growth.

Growth in civil aviation and government’s visIon of becoming the third-largest aviation market by 2021 is also driving demand as the Government of India through its “AATMANIRBHARTA” initiative is planning to reduce domestic manufacturing costs in aviation industry.

The Airport Authority of India’s (AAI) is striving towards abolishing royalty while offering discounts in lease rent to promote MRO units to set up facilities at its airports. This will create opportunities for growth in India.

Why Is IFEC Gaining Popularity in Aircraft Cabin Interior Market?

To enhance the traveler’s experience and promote air travel, airlines are integrating modern in-flight entertainment and connectivity (IFEC) systems with their cabin interior. IFEC has also opened doors for in-flight retailing thus boosting the revenue generation. IFEC also allows the passengers to connect their private devices and enjoy their content on the go. Such factors will drive the growth of IFEC segment during the forecast period.

Increasing demand for long haul air travel has accelerated the production of large body aircraft. A custom designed interior which prioritizes passenger safety will elevate the passenger comfort and overall travel experience of the passenger at high altitudes. Adoption of long and wide body aircrafts will boost the aircraft cabin interior market sales.

A spike in aircraft deliveries is observed in past few years. With rise number in of commissioned aircrafts, the need for maintenance, servicing and repair of aircraft components is anticipated to increase driving the aftermarket distribution channel market growth.

Increasing demand of commercial aircrafts, growing consumer inclination towards air travel to save time and growing trend of customized interior are further accelerate the growth of the aircraft cabin interior aftermarket distribution channel.

Emergence of new market players is making the market more consolidated. Inorganic strategies employed by market players to strengthen their market position include strategic acquisitions, collaborations, and merger with other companies.

Expansion of production capacity is in the cards as a method to expand and sustain in the global Aircraft Cabin Interior market.

In June 2021, HAECO ITM Limited announced that the company has extended its agreement with China airlines to assist the company with inventory technical management to the airline’s expanding Boeing 777 fleet.

In June 2019, United Technologies Corporation announced to merge its aerospace business with Raytheon Co. creating a new company worth US$ 120 Bn. The merger will lead to creation of conglomerate which ranges from commercial aviation to defense procurement.