The demand for aircraft exterior lighting is increasing with emerging economies tilting towards alternate technology products. The Middle East countries are slowly shifting from oil and gas-based revenues to trade, commerce, tourism, and manufacturing. Regional advantage coupled with robust business models and investments in infrastructure are expected to allow carriers in the Middle East to channel traffic through their hubs and also offer a one-stop service between various cities.

The upsurge in demand for aircraft exterior lighting will also be observed mainly due to the introduction of low-cost carriers in the region. The region will need new aircrafts and is anticipated to cater to the growing global market. All the mentioned factors are expected to directly create demand for aircraft transparencies products. The impact of the boom in the aviation industry will be high and will continue to drive the aircraft exterior lighting market over the course of the forecast period.

North America to emerge leader among all regions

With an advanced fleet size and the presence of market giants, North America has emerged as the most lucrative region in the global aircraft exterior lighting market. The number of suppliers and distributors of aircraft components is continuously growing at a healthy rate in the region. With snowballing international investments and conglomerates, government support, and more aircraft deliveries, the suppliers list is expected to continue expanding in the coming years.

Most of the suppliers collaborate with aircraft exterior lighting manufactures located in the U.S. As a result, the market will be positively influenced by the widening customer reach. Moreover, this will also support players to shift their manufacturing footprint across the region.

Europe to focus on the adoption of efficient aircraft

European aircraft carriers are currently driven towards more efficient planes for reducing the cost of fuel as well as to comply with the Emissions Trading System of the European Union, the cap-and-trade scheme designed for cutting down on greenhouse gas emissions. Airlines are also taking the necessary steps voluntarily. As a result, the modest global demand for fuel-efficient and mid-range airplanes and new small and wide aircraft is likely to drive the growth of the global aircraft exterior lighting market. 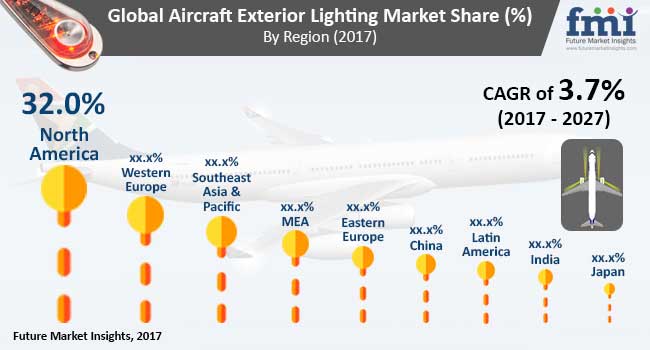 Strong growth in the upper middle income group has paved the way for a growing number of air travellers with highest growth likely to be witnessed in the APAC region. It is expected that nearly half of the world's air traffic growth will be driven within the Asia Pacific region in the next 20 years. The global middle class is expected to double by 2034 in emerging countries. The rise in spending power will see a further growth in tourism.

Moreover, with further economic integration and labour mobility, Asia Pacific is anticipated to witness consistent growth of travel within and between regions. The aircraft refurbishing market is witnessing global migration from west to east due to lesser costs. Of the new airport development projects under construction globally, APAC comprises more than half, which naturally opens a plethora of opportunities for the airport support industry in the region. This is expected to bode well for the aircraft exterior lighting market.