The aircraft tires market have made significant gains in the recent past, owing to the expanding airline network and surging demand for military and commercial aircrafts the world. Furthermore, growing sustainability concerns have furthered the adoption of radial ply aircraft tires among prominent manufacturers. This has bolstered the growth of aircraft tire market.

The aircraft tire market is anticipated to witness impressive growth overcoming the challenges encountered in recent years, including complex manufacturing demand, banning of industrial application and disposal of rubber.

From adopting radial tires to adoption of Kevlar - an aromatic polyamide, aircraft manufacturers are adopting hybrid composite materials for the manufacturing of military aircraft tires. This efforts are yielding credible results, with the market registering a growth of over 6% CAGR during the forecast period of 2021 and 2031.

In its new study, ESOMAR-certified market research and consulting firm Future Market Insights (FMI) offers insights about key factors driving demand for aircraft tire. The report tracks the global sales of aircraft tire in 20+ high-growth markets, along with analyzing the impact COVID-19 has had on the automotive industry in general, and aircraft tire in particular.

How is Application in Military and Commercial Aircrafts Affecting Growth?

Surging production of military and commercial aircrafts has improved the growth prospects for the aircraft tire manufacturers. Also, rising production and usage of aircrafts led to higher maintenance cycles of aircrafts across the world, fostering the sales.

Technological advancements and increased research & development activities for the development of sustainable tire production is improving the growth of aircraft tire market. Increasing use of narrowbody and widebody aircraft in commercial and military sector has widened the scope of aftermarket tire sales, attributed to the constant need for maintenance services. Opportunities also abound in the bias ply segment. Hence, the market is poised to embark on a positive growth trajectory until 2031.

A temporary setback was however experienced amid the COVID-19 pandemic, as government imposed lockdowns caused a pause in production activities, triggering a shortage of essential spare parts and accessories. However, as there were relaxations in the rules and international travels, the market experienced a resurgence with the recommencement of travel industry.

How are Sustainability Concerns and Demand for Kevlar in Manufacturing of Aircraft Tires Pushing Sales?

Hence, prominent manufacturers are constantly conducting research & development activities for the innovation in manufacturing. Key players are adopting the usage of Kevlar – a new aramid, for the manufacturing of aircraft tires used in the military as well as commercial aircrafts.

Increasing demand for aircraft tires with the integration of Kevlar is expected to boost the market revenue over the forecast period of 2021-2031.

Demand for Helicopters & Freighters in the Military Sector to Drive Sales

Helicopter and freighter aircrafts are expected to witness positive growth over the forecast period. Growth is attributed to the surging popularity of wheeled helicopters and cargo aircrafts primarily used in the military sector.

Increasing applications from military sector such as surveillance, combat operations, emergency services, and others are expected to boost the production of helicopters. Furthermore, these helicopters offer better fuel economy and higher speed over long distances, which will improve the demand of aircraft tires.

What are the Opportunities in U.S. Aircraft Tire Market?

The U.S. aircraft tire market is poised to witness substantial growth throughout the forecast period. According to the Aerospace Industry in the United States, in 2018 the industry contributed US$ 151 billion in the export sales to the U.S. economy through its manufacturing industry. Also, in 2019, the U.S. aviation industry registered around US$ 387 billion sales revenue for aircraft and aircraft exports were valued at US$ 126.5 billion.

Furthermore, the sales of U.S. aerospace industry grew by 15% registering the sales of around US$ 137 billion across Washington and US$ 119 billion sales across California. On the flip side, due to outbreak of COVID-19, the industry witnessed a set-back and registered a drop in production of aircraft of nearly 50% in the FY-20.

However, as the economy recovered, increased focus on the sustainable investment in research & development for the product innovation and recommencement of transportation industry fueled the growth of aircraft industry across the U.S.

Furthermore, increasing number of passengers travelling internationally have widened the scope for aircraft tire manufacturers across the country. Heavy presence of manufacturers in the region and rising production of commercial as well as military aircrafts will drive the demand of aircraft tires in the U.S.

How is China Spearheading the Growth in Asia Pacific Aircraft Tire Market?

While soaring demand for new aircrafts will continue to enable the growth in the U.S., the report on the aircraft tire market presents an impressive growth outlook for China. Technological advancements for aircrafts and rising demand from the military sector for narrowbody aircraft is expected to bolster the growth of aircraft tire across China.

As of 2019, around 600 million passengers travelled to international as well as domestic borders, representing an increase of 2% compared to 2018. However, the number reduced drastically due to pandemic registering a drop of almost 90%.

As airlines in this region continue to invest in procuring new and technologically advanced aircrafts despite the pandemic. Also, increasing disposable income coupled with rising business activity in the country has led to increasing number of domestic as well as international passengers in China. Furthermore, favorable regulations in the aviation industry and increasing number of budget airlines will propel the growth of aircraft tires in China.

With China being the second largest market for the manufacturing of aircrafts, despite of the slight setback due to coronavirus pandemic, the country is expected to witness a surge in the production of aircrafts backed by the surging demand from commercial as well as military sector.

How Lucrative is the Aircraft Tire Sales Opportunity in India?

With rising initiatives for developing sustainable products and enhance fuel efficiency in aircrafts in addition to reducing weight on the aircraft tires, the Indian aviation industry are adopting new manufacturing trends to achieve market dynamics requirements and facilitate the demand of OEMs as well as aftermarkets. This has bolstered the growth of aircraft tire market across the country.

According to the India Brand Equity Foundation (IBEF), in 2019, passenger traffic in India stood at close to 316.5 million, out of which 63.59 million was international traffic and domestic passenger traffic stood at 252.92 million. Also, Indian government in 2020 invested around US$ 120 billion for the infrastructure development of aviation industry. Increased production of military and commercial aircrafts in India accelerated the sales of aircraft tires in the country.

Currently, it is estimated that the aviation industry in India contributes around US$ 72 billion to the GDP. Additionally, the government under union budget 2021-2022 lowered the custom duty from 2.5% to 0% on the components for manufacturing of aircrafts, reducing the operational and trade cost. Hence, the ease in international trade facilities is expected to boost the aircraft tire market in India.

What is Driving Adoption of Aircraft tire in UK?

According to FMI, U.K is expected to be one of the most lucrative country for aircraft tire market across Europe. According to International Civil Aviation Organization, U.K has the most mature aerospace industry with its robust technologies and advanced infrastructure. Increasing research & development investments in aerospace domain for the manufacturing of commercial aircrafts, has enabled the production of aircraft tires in the region.

Soaring production and modernization of aircraft in both commercial and military sectors have improved the manufacturing of aircraft tires across the country. For example, in 2018, the UK Ministry of Defense unveiled its plans to invest 17 new fighter jets F-35 by 2022-end. Likewise, in February 2019, UK based commercial airline, International Airlines Group purchased 42 B777x aircraft, including 18 orders and 24 options. These procurements are expected to create growth prospects for the aircraft tire manufacturers in the upcoming years.

How is Advancement in Technology across Germany Aiding the Market Demand?

The development of Germany aviation and aerospace industry has been pointing upward for many years on the back of rising technological development in the region. The industry generated the approx. US$ 4.89 billion in 2017 backed by the increased production of military aircrafts in the country.

In 2019, according to International Aviation Transport of Germany, the air transport industry contributed US$ 68 billion of GDP in Germany. Increasing number of airlines and improved infrastructure is also aiding the growth of aircraft tire market in the country. 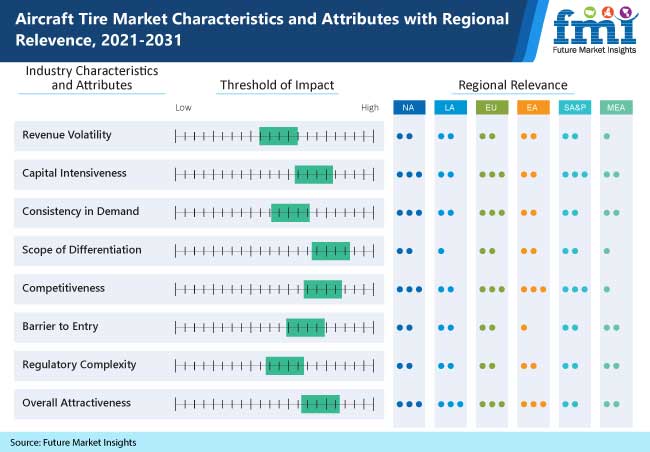 Which Ply Type Will Gain Traction in the Aircraft Tires Market?

In terms of ply, the aircraft tire market is bifurcated in two type, which are, bias ply and radial ply. Among both, bias ply are expected to emerge as key revenue powerhouse in the market. Bias ply aircraft tires are made up of casing piles which run diagonally at right angles to one another.

The angle helps in providing high speed stability while dictating strength and load capacity. Also, they protect the casing piles from damage and can act as wear indicators on retread tires.

Considering this, some of the leading manufacturers such as Bridgestone Corporation and Goodyear Tire & Rubber Company have increased the use of bias ply for the production of military and commercial aircraft tires. Bias ply offers more ground control, enhanced stability and superior surface resistance as compared to the radial ply.

However, due to sustainability concerns and preference for lightweight, fuel efficient aircrafts, radial aircraft tires are expected to witness positive growth over the forecast period.

Why are Narrowbody Aircrafts Acquiring Popularity?

However, with the recommencement of travel industry in most of the countries, there has been a spike in number of passengers travelling internationally. Henceforth, owing to the increasing number of air travel has necessitated the need for widebody aircraft in the commercial sector. Hence, widebody aircraft is anticipated to register steady growth over the forecast period.

In terms of sales channel, the market is divided into original equipment manufacturers (OEM) and aftermarket. Demand for aircraft tires for the aftermarket sales channel is anticipated to be strong due to the high operational cost and increased frequency of tire replacement for an aircraft every year. As the global production of aircraft rises, manufacturers are looking to reduce operational costs to achieve economy.

According to FMI’s study, almost every other aircraft tire being manufactures in the global market will be sold through aftermarkets. Meanwhile, OEMs are anticipated to emerge as the fastest growing sales channel on the back of manufacturers forming strategic partnerships with the OEMs to create lucrative revenue and avoid added loss value from third-party distributors.

According to Future Market Insights, the aircraft tire market is fragmented. Product innovation, research & development activities, strategic collaborations, mergers, and partnerships are some of the few strategies adopted by key players to maintain their position in the industry. For instance:

Leading aircraft tire manufactures as profiled by FMI include: