Aircraft maintenance services includes is the overhaul, repair, inspection or modification of an aircraft, aircraft cabin interior , aircraft lighting or aircraft component. Maintenance tasks ensure compliance with Airworthiness Instructions. The maintenance of aircraft is highly regulated, in order to ensure safe and correct functioning of all the components at the time of flight.

These directives are coordinated under international standards, maintained by bodies such as the International Civil Aviation Organization (ICAO). Some of the applications considered under the air transport MRO market report include airframe, engine, component and line MRO services. The global air transport MRO market is estimated to be valued at US$ 76,637.9 Mn by 2018 end. 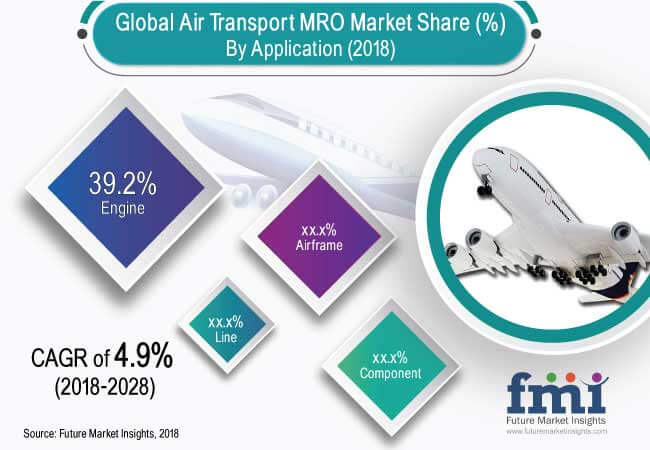 Air travel passengers are increasing day-by-day across the globe, primarily due to the establishment of more than 700 routes for better connectivity. According to the International Air Transport Association, the global passenger traffic increased by 7.6% in 2017, which is more than the average annual growth witnessed during the last ten years, i.e. 5.5%. This increase will create new challenges for the government to provide appropriate infrastructure, technology and services that can accommodate this growth and to assure that the regulations and taxes do not become a restraining factor for growth. This growth in passenger traffic will also drive the aviation market, in turn, leading to the growth of air transport MRO market.

Long-term prospects for aviation will remain strong. Tier 1 and Tier 2 service providers are investing in and entering into strategic collaborations with airport handler or aircraft ground support equipment companies based in Asia Pacific to enhance their capacity to handle the rapidly expanding air transport MRO market.

By collaborating with airline companies, the companies are looking to enhance their end user reach in markets by adding new clients to their list as well as improving responsiveness and services to customers in the continuously growing Asian air transport MRO market. The trend will certainly emerge as a competitive strategy in the coming years and is visible across all major service providers in the air transport MRO market.

Air transport MRO market service providers are focusing on expanding their presence in emerging aviation markets to capitalize on the growing demand for aviation industry and MRO services due to lower capital and labour costs in these regions. The market for air transport MRO in countries, such as China, India, Indonesia, Brazil and Mexico, is projected to benefit significantly from the growing demand for the aviation industry.

The outlook for the global aerospace and defense market is strong. According to MarketLine, the global aerospace and defense market generated a total revenue of approximately $988.7 billion in 2016. Furthermore, the market is expected to grow at a compound annual growth rate (CAGR) of 5% between 2016 and 2021 and will reach a value of approximately $1,249.5 billion by 2021.

On the basis of application, the Air Transport MRO market can be segmented into:

On the Basis of aircraft type, the Air Transport MRO market can be segmented into:

By Region, the Air Transport MRO market can be segmented into: