APEJ is a highly populous, fast growing region that includes dynamic economies such as China, India, Singapore, Thailand, Indonesia and Australia. A good proportion of these countries are mobile first or mobile only providing limitless opportunities to companies actively involved in the global mobile application market. While China is currently the largest market at roughly $7 Billion according to 2016 data, India is anticipated to catapult ahead during the later half of the forecast period and register an astounding CAGR of 24.7%.

The Apple App Store is dominant in affluent regions of the world such as North America and Western Europe. However, it is nowhere near the Google Play Store in the APEJ region. Revenue from the Apple App Store in the APEJ mobile application market was close to $5 Billion in 2016, while Google Play recorded a revenue of around $8 Billion in the same year. By the year 2026, this chasm should become even more markedly pronounced with a revenue difference of nearly $10 Billion in favour of Google Play. The CAGR of the Google Play segment for the forecast period is predicted to be 12.4%.

Japan is a nation well-known for its economic strength, highly developed mobile infrastructure and being home to a population that is almost always on the bleeding edge of technology. Even with a relatively small population especially when compared to North America or APEJ, a CAGR of 6.8% for the decade can be expected, leading to a revenue of a little over $3 Billion.

By end use, the Games segment is likely to drop to a little more than a third of the total market revenue share by the year 2026 from almost half the revenue share in 2016, representing a CAGR of 6.2%. Companies looking to enter the Japan mobile application market should target Google Play as opposed to the Apple App Store as it is likely to maintain its dominance in this highly influential regional market. 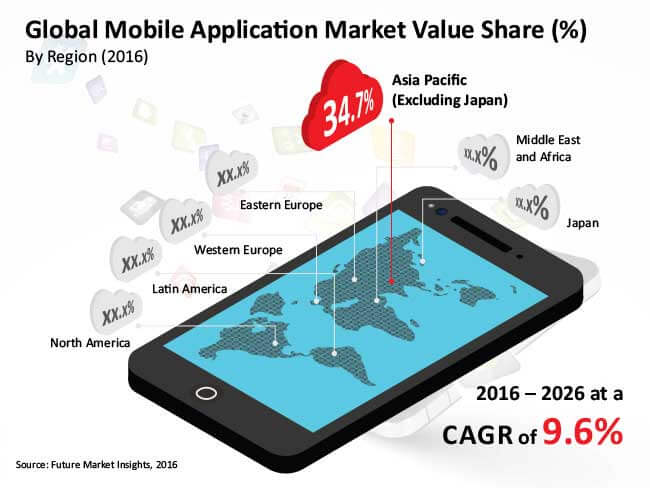 "Smartphones have all but replaced personal computers, gaming consoles, MP3 players, calculators, cameras and many more devices. They have become a ‘one-stop’ solution for many people. The primary use case (and revenue generator) in the global mobile application market is mobile gaming and it is anticipated to remain so throughout the forecast period 2016 – 2026. The Games segment by end use in the global mobile application market generated a revenue of more than US$ 18 Billion worldwide in 2016.

This segment is predicted to record a CAGR of 9% and be worth more than US$ 42 Billion in 2026. The Games segment is likely to account for close to 45% market share in the global mobile application market by the end of the forecast period and therefore, its importance can hardly be overstated for any player wishing to enter this segment.”