An Incisive, In-depth Analysis on the Pearlescent Pigment Market

This study offers a comprehensive, 360 degree analysis on the Pearlescent Pigment market, bringing to fore insights that can help stakeholders identify the opportunities as well as challenges. It tracks the global Pearlescent Pigment market across key regions, and offers in-depth commentary and accurate quantitative insights. The study also includes incisive competitive landscape analysis, and provides key recommendations to market players on winning imperatives and successful strategies.

Pearlescent pigments are mainly utilized to attain high lustre and premium finishes for luxury cars. Demand for high performance and special effect pearlescent pigments for application in the automotive sector has gained traction in the past few years. These pigments are widely preferred in the automotive paints and coatings industry and are thereby anticipated to drive the demand during the forecast period.

Currently, white and black remain the top preferred colours in the automotive sector. However, consumer preference is rapidly shifting towards speciality colours, particularly chromatic colours, and this trend is anticipated to propel the demand for pearlescent pigments for application in automobiles globally. By the end of 2014, pearlescent pigments was used for paints in over 45% of the cars in the U.S. and 35% in Europe

For instance, key players such as BASF SE and ECKART Effect Pigments are particularly focusing on development of synthetic pearlescent pigments for niche applications such as automotive topcoats and architectural finishes, where durability is a major factor along with aesthetic appeal for premium and luxury vehicles.

In 2013, ALTANA AG developed high-quality synthetic pearlescent pigment on the basis of borosilicate glass as a substrate.

Packaging companies strive to meet increasing demand for high-quality graphics, which in turn is increasing their demand for pearlescent pigments.

In 2014, ECKART Effect Pigment launched a number of innovative pearlescent pigments based on synthetic mica, particularly targeting master batchers and compounders in the packaging industry.

Western Europe to Dominate in Terms of Market Share, while APEJ to witness Maximum Growth Rate Over the Forecast Period 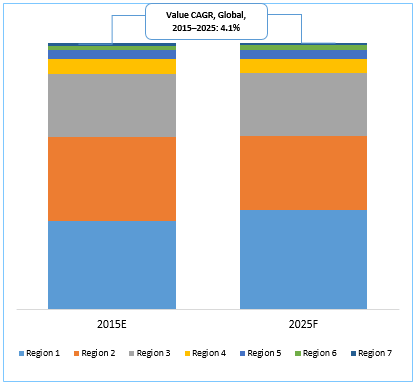 Manufacturing have an eye on enhancing their production capacity, by commencing operations in new production facilities

Detailed profiles of companies are also included in the report to evaluate their strategies, key product offerings and recent developments. Some of the key players profiled in this study include BASF SE, Merck KgaA, DIC Corporation, ALTANA AG, Fujian Kuncai Material Technology Co., Ltd, Oxen Special Chemicals Co., Ltd, CRISTAL, Spectra Colours Ltd. Major players based in China and Japan are well known for production of high quality of synthetic pearl pigments. Demand for pearlescent pigments in these countries is expected to mainly be driven by the rising demand for premium and luxury vehicles. North America and Western Europe has a relatively consolidated market, unlike APEJ which seems to be very much fragmented with large number of China based suppliers.

The report begins with an executive summary intended to give a clear perspective about the market to the reader. It is then followed by market overview and provides market definition and analysis about drivers, restraints, opportunities and key trends in the market. The sections that follows includes global market analysis, analysis by product type, structure type, application and regional/country level analysis.

All the above sections evaluate the market on the basis of various factors affecting the market, covering present scenario and future prospects. For market data analysis, the report considers 2014 as the base year, with market numbers estimated for 2015 and 2016 and forecast made for 2017–2025. All the segmentation for pearlescent pigment has been considered after appropriate secondary research and revalidation of the data obtained through interviews with key thought leaders in the industry. The market has been forecast based on constant currency rates.

The next section of the report highlights the market by region and provides the market outlook for 2015–2025. The study investigates the regional year-on-year (Y-o-Y) growth of the pearlescent pigment market. Key regions assessed in this report include North America, Latin America, Western Europe, Eastern Europe, Asia-Pacific excluding Japan, the Middle East & Africa (MEA) region, and Japan. The report evaluates the present scenario and growth prospects of the regional market for 2015–2025.

The market segments for the global pearlescent pigment market have been analyzed in terms of Basis Point Share (BPS) to understand the relative contributions of each segment to market growth. This detailed level of information is important for identifying various key trends in the pearlescent market. Another key feature of this report is to analyze the market in terms of absolute dollar opportunity represented by the pearlescent pigment sales. Absolute dollar opportunity is critical for evaluating the scope of opportunity that a provider can look to achieve as well as to identify lucrative segments. The overall absolute dollar opportunity represented by the pearlescent market is mentioned in the report. To understand key growth segments in terms of growth and adoption for pearlescent pigment globally, FMI developed the market ‘Attractiveness Index.’ The resulting index is expected to help providers identify real market opportunities. A number of primary and secondary sources were referred during the course of the study. Few of the secondary sources include IMF, World Bank, Hoover’s, Factiva, company’s annual reports, government associations and publications.

APEJ Region is Projected to Represent an Incremental Revenue Opportunity of More Than US$ 350 Mn Between 2015 and 2025: Future Market Insights