With robust CAGR of 7.6% during the projected period, the global market for herbal medicinal products is expected to be valued at a little more than US$ 130 Bn in 2017. In 2018, this market is likely to represent absolute $ opportunity more than US$ 8800 Mn and incremental opportunity of more than US$ 140 Bn between 2017 and 2027.

Absolute $ opportunity is usually overlooked when analysts forecasts the market but, it is critical in assessing the level of opportunity that an enterprise can look to achieve, as well as to identify potential resources from both a sales and delivery perspective.

In regions such as North America, the herbal medicines products are considered/sold as dietary supplements or nutraceuticals with health claims, which is pre-approved by Food and Drug Administration (FDA) under Dietary Supplements Health and Education Act. The FDA regulations for these products are less stringent as compared to the conventional medicines.

Western European countries have witnessed a significant increase in the prescription of homeopathic medications due to the higher awareness and positive adoption of this treatment option. Higher effectiveness, less side effects, and safety during pregnancy are few factors that are contributed to the higher adoption of homeopathy medication in Western European countries.

Apart from Homeopathy, Western Europe is also a hub for herbal products, which is also contributing in the growth of the global herbal medicinal products market. In Eastern European countries, the herbal medicines has witnessed tremendous increase in the recent years. In Russia, majority of the population prefer traditional medicines as a primary option for the treatment. Many of the men and women suffering from infertility are adopting traditional treatment option despite the progressive development in contemporary medicines.

Increasing consumer demand for green label products is resulting in manufacturers shifting from niche distribution channels to mainstream mass retailers. Moreover, supermarket chains are also expanding product ranges on their shelves, which has resulted in a sharp increase in sales of herbal supplement products in the recent past. High adoption and export of KAMPO medicines in Japan is one of the reason for boosting the global herbal medicinal products market.

KAMPO medicine is very popular and is widely used in Japan, which is based on traditional Chinese medicine however, modified to Japanese culture. It is also adopted in Taiwan with slight modification and exported to the Western regions. According to the market survey by WHO more than 30% of the total OTC drugs sold in Japan was prepared using botanical products. 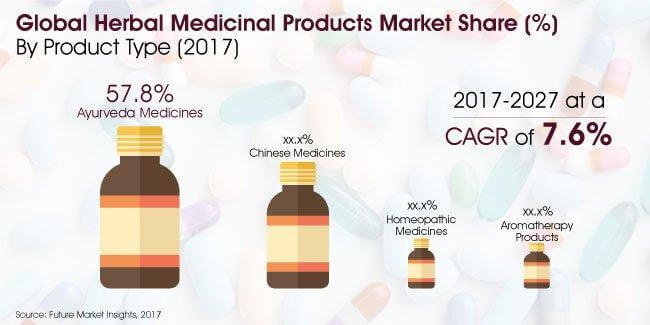 Ayurvedic medicines is expected to be the most lucrative among all product type segment of herbal medicinal products market, with attractiveness index of 2.3. With more than 55% revenue share, the Ayurvedic medicines segment is likely to be valued at more than US$ 75 Bn in 2017, expanding at a Compound Annual Growth Rate of 6.6%.