In the long-run, low rolling resistance tires with a wide band width are expected to account for bulk of the overall demand, while sales across the aftermarket segment are anticipated to surge incredibly. Furthermore, lucrative growth promises are in store for the passenger vehicles sector, as the global ownership of cars and other automobiles is increasing.

How are Future Projections Outpacing Historical Ones?

Demand for low rolling resistance tires have been inclining significantly across the historical period, as major automotive manufacturers look to leverage efficient tire technology to enhance automotive performance. As fuel economy concerns acquire precedence, car manufacturers are looking for solutions which would enable less fuel consumption while in transit.

Demand suffered a significant setback in the initial half of 2020, attributed to the imposition of stringent lockdowns amid the COVID-19 pandemic. This led to cessation of manufacturing activities across the automotive industry, causing automobile output to decline considerably, leading to curtailed demand for low rolling resistance tires. However, as restrictions eased in the latter half, growth projections were restored.

In the future, the market is poised to accrue significant gains, with a majority of the manufacturers increasing their inroads into Asian markets. India, China and Japan are likely to yield highly opportunistic prospects, leading the market to register a staggering double-digit CAGR exceeding 11% through 2031.

How is Rising Demand for Fuel Efficiency Driving Market Growth?

According to the Global Fuel Economy Initiative (GFEI), an improvement of an average 1.7% was recorded between 2005 and 2008, which was far below the required standard of 2.7% annual improvement rate to reach the GFEI target of halving new light duty vehicle fuel economy by 2030. Also, according to the International Energy Agency, global average fuel consumption of newly registered LDVs reached 7.2 liters of gasoline-equivalent per 100 km (Lge/100 km) in 2017.

Why Rolling Resistance is Imperative to Reduce Global Carbon Footprint?

Reducing carbon dioxide emissions is a key goal for countries and industries as the world intensifies its fight against climate change. Transforming transportation will play a major role, from improving the fuel efficiency of existing cars, trucks and planes, to introducing new electric vehicles and infrastructure. When it comes to trucks, lowering the rolling resistance can significantly impact fuel consumption and CO2 emissions.

It is crucial to the debate around cutting CO2 emissions because rolling resistance is responsible for up to one-third of a truck’s fuel consumption. The more fuel a vehicle consumes, the more CO2 it emits. According to the European Union, without further action, CO2 emissions from heavy-duty vehicles are set to increase by up to 10% between 2010 and 2030. Fortunately, it is possible to reduce a tire’s rolling resistance and, therefore, lower its CO2 emissions.

While low rolling resistance tires have been hailed as a welcome development, there are certain structural limitation which may impede uptake to an extent. Due to the presence of less rubber, these tires have a significantly lesser grip, which could affect braking, especially on wet roads. This may increase chances of skidding and subsequently fatalities due to accidents.

How is the Low Rolling Resistance Tire Market Expanding in the US?

As per the organization’s report, the US EPA SmartWay-verified tire list expanded 37 times more over the previous decade, rising from eight tire offerings in 2010 to over 300 as of 2020. Prominent manufacturer Goodyear Tire and Rubber Company has a highly robust presence, offering a wide range of fuel max tires, such as the Fuel Max® LHD® 2, the G572 1AD® Fuel Max®, Fuel Max SSD® and Fuel Max® LHT® among others. These tires incorporate cool-running, fuel-efficient rubber compounds, tire constructions and tread designs to help lower rolling resistance and enhance fuel economy.

Recently, in May 2021, Cooper Tire & Rubber Company announced the launch of its new Discoverer® Rugged TrekTM tire, which is slated to be available nationwide soon. Designed for mounting on all-seasoned pick-up trucks and SUVs, the tire consists of several features, including Whisper GroovesTM which block air rush through the tire to reduce noise during highway drives, the Stable TracTM Technology which enables enhanced traction on rugged roads and Earth DiggersTM to forcefully dig into sandy, muddy and uneven surfaces.

Why is China Likely to emerge as a Lucrative Market?

The Chinese tire industry has grown exponentially for over a decade, catered by an estimated 230 large and small tire makers. As of 2020, the country’s major tire manufacturers recorded nearly 400 million units of automotive tire production over the first 11 months, representing an increase of 1% compared to 2019.

Presently, China ranks among the topmost tire manufacturers in the world, reaching the number one spot in 2017. Unprecedented automotive manufacturing has majorly catalyzed domestic tire production across the East Asian giant. Several top brands such as Michelin, Bridgestone, Goodyear, Continental, Pirelli, Yokohama, Hankook and Kumho have a significant presence across the regional landscape.

How is the Indian Low Rolling Resistance Tire Market Expected to Perform?

With rising initiatives to lower carbon emission levels and enhance fuel efficiency in vehicles in addition to reducing automobile weight, the Indian tire industry has been embracing new manufacturing trends and processes to fulfil changing market dynamics requirements and cater to the demands of original equipment manufacturers as well as aftermarkets. This has heightened growth prospects for low rolling resistance tires.

It is estimated that the investment-rich tire industry contributed 3% of the manufacturing GDP, while the automotive sector as a whole accounted for over 7% of the GDP, and nearly half of the country’s manufacturing sector during FY 2015-16. Recent estimates suggest that the Indian tire industry is valued at nearly US$ 10 billion. Hence, key manufacturers including MRF Ltd., Apollo Tyres Ltd., CEAT Ltd., JK Tyre & Industries Ltd. and Goodyear India Ltd. are actively operating in the market.

In 2016, the Indian government announced that it would skip the Bharat Stage (BS) V emission norms altogether and adopt BS VI norms by 2020. A recent Supreme Court judgement ruled that sales and registration of motor vehicles conforming to earlier BS IV standards would be banned beginning April 1 2020. Such initiatives are prompting key manufacturers to incorporate highly advanced automotive designs, which includes equipping them with low rolling resistance tires.

Why are Manufacturers eyeing the Japanese Market?

Japan is expected to emerge as a highly lucrative market for low rolling resistance tire market, attributed to its pinnacle position with respect to global tire output. According to a report published by the Japan Automobile Tyre Manufacturers Association Inc. (JATMA) 2019, production volume of automobile tires increased by 1.3% to 146.75 million units in 2018. Passenger car tires production rose by 1.4% from the previous year, while those of light trucks increased by almost 2%.

Recently, in April 2021, Bridgestone Corporation announced its decision to invest ¥ 10.2 billion (US$ 9.3 million) to develop cutting-edge equipment for certain facilities at its Shimonoseki Plant, which manufactures tires for mining and construction vehicles. The installation process is set to commence from 2022, and expected to be completed by 2025. The new equipment is slated to enhance the company’s production system in terms of safety, disaster preparedness, eco-friendliness, quality and productivity.

How Rising EV Production is Driving Increased Uptake across Germany?

Germany is anticipated to emerge as the world’s leading electric vehicles (EV) hub, thus spurring a flurry of innovations across the domestic automotive industry. According to the Federal Motor Transport Authority (KBA), sales of full-electric vehicles in Germany increased three-fold to 194,163 units in 2020, while electrified vehicles with full or partial electric propulsion reached a share of 22% in Q4 2020.

Full-electric vehicles comprised over 1% of all registered passenger cars in Germany by 2020-end, up from 0.5% in 2019. Prominent automotive giant Volkswagen topped the list, with over 20% of EV sales, with the latest addition to its collection being the ID3 models in September 2020. Such prolific developments are widening prospects for low rolling resistance tires across the market. 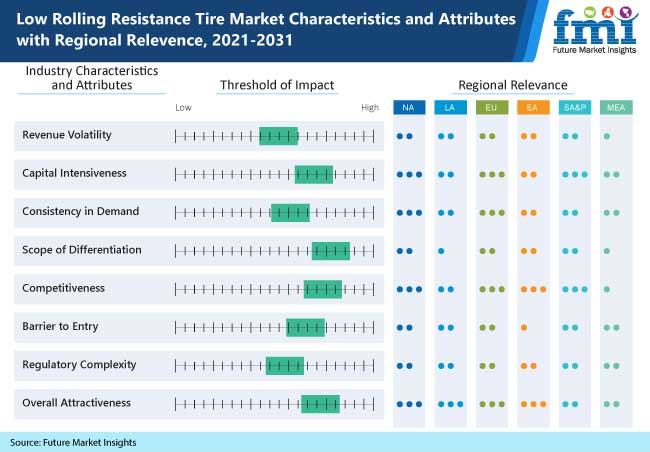 By vehicle type, passenger vehicles are expected to remain the primary end-users across the forthcoming decade. As per projections by the International Organization of Motor Vehicle Manufacturers (OICA), global passenger vehicle sales reached 53.5 million units as of 2020. Hence, demand for low rolling resistance across this segment is poised to increase manifold.

By width type, wide band width low rolling resistance tires are expected to yield around a quarter of the market revenue, attributed to the distribution of vehicle load over a larger surface area, which reduces possibilities of tire damage from frictional heat. Moreover, installing wide band width tires helps save up to 800 pounds of weight, helping achieve fuel economy and increasing cargo carrying capacity.

The wider the tire, lower is the pressure exerted. Hence, a 25mm tire at about 90 PSI provides the same rolling resistance as a 23mm tire at 120 PSI. While offering improved rolling resistance, a wide tire at low pressure also entails greater rider comfort. The tire is better able to absorb vibrations from a poorly surfaced road which provides a smoother ride.

What Opportunities are Prevalent across the Aftermarket Segment?

Demand for low rolling resistance tires for the aftermarket sales channel is anticipated to be relatively strong, amid the constant requirement by vehicle owners to maintain and prolong automobile life cycle.  As the global ownership of vehicles continues to rise, vehicle owners are looking to reduce operating costs to achieve economy, for which these tires are highly important.

Furthermore, the global transportation industry is experiencing an increase in its fleet of commercial vehicles such as trucks and vans, given the ever broadening scope of domestic and international trade, which in turn is boosting the logistics industry. Hence, saving operational costs to facilitate efficient trade is broadening demand for low rolling resistance tires across the aftermarket segment.

In February 2021, The Goodyear Tire & Rubber Company initiated procedures to acquire Cooper Tire & Rubber Company for a total enterprise value of approximately US$ 2.5 billion. The transaction will expand Goodyear’s product offering by combining two portfolios of complementary brands, while creating a stronger US-based manufacturers with increased presence in distribution and retail channels across the light trucks and LUV product segments.

Certain manufacturers are also forging agreements with key research institutes to further product innovation. For example, in March 2021, Sumitomo Rubber Industries Ltd. announced that it has been working with the Kansai University on joint research aiming to develop a new technology capable of generating electric power from the rotation of a tire, which is accomplished by installing a power generating device inside of a tire to harness the static electricity generated during rotation.

How will the low rolling resistance tire market grow in the future?

According to FMI, the global low rolling resistance tire market is expected to post impressive gains through 2021 and beyond, expanding at a strong growth rate. Growth is majorly underpinned by the increasing scramble towards incorporation of sustainable development directives and imposition of stringent regulatory standards governing automotive emission standards

Which region is likely to account for the maximum growth opportunity?

FMI’s report establishes that the Asian market is likely to post impressive gains in the future, with significant packaging improvement initiatives being visible across the Chinese and Japanese markets. However, North America and Europe are expected to contribute equally attractive revenue shares to the global landscape

Which is the most preferred low rolling resistance tire width type?

Demand for wide band width low rolling resistance tires is expected to incline significantly over forthcoming years, expected to account for nearly a quarter of the revenue share in the forecast period. Enhanced automotive performance due to even load distribution and greater fuel economy

Which are the prominent low rolling resistance tire market players?