The demand for machine tool touch probes has grown alongside the growing trend of increasing mechanisation across nearly all industry verticals. The key driver for this trend of mechanisation is the need for precision and speed, which can significantly enhance industrial productivity and reduce wastage.

On the other hand, nearly all industries have witnessed disruptions since the start of 2020 and several of them continue to reel under the severe economic ramifications of the Covid-19 pandemic. This in turn has had a negative impact on sales of machine tool touch probes as well.

However, while the overall impact of the Covid-19 pandemic on sales of machine tool touch probes has been negative, the effect has not been uniform across all industrial sectors.

Sales of machine tool touch probes have actually increased in end-user industries such as healthcare and research. At the same time, the increase in demand by certain select segments has not been able to offset the drop in demand by other key segments such as manufacturing and aviation. This has significantly changed the market’s landscape from pre-pandemic times.

Going forward, it appears that that the recovery of several key end-user industries is imminent. Besides this, certain shifts in consumption patterns of machine tool touch probes are also likely to endure over the coming years.

Key manufacturers and other market players will hence need to adapt to these shifts and account for the expected recovery in demand. Additionally, they will also have to account for ongoing regional shifts being witnessed by the market. All these factors are resulting in the market being more dynamic than ever before.

A machine tool touch probe is a high precision device used for determining the size of tool, work piece and location of job located within HMC, CNC and VMC machines. These devices are used for accurate and precise dimensioning purposes.

Moreover, human personnel can work only for a number of limited hours whereas machines and their components are capable of working continuously.

The market is becoming healthy for competition and this is a positive factor for the players involved in machine tool touch probes.

Growing automation and use of advanced technology during the manufacturing and construction of machine tool touch probes have further increased market attractiveness among consumers and various industries.

As the market is consolidated with the presence of a few players across the globe, key manufacturers are focusing on technological innovation to meet consumer needs.

On the basis of machine type, the market has been segmented into CNC machining center, CNC turning center and others. Based on end use, the market has been segmented into automotive, defense & aerospace, electronic, general machining, medical, petrochemical and others. Significant regions covered in the report include North America, Latin America, Western Europe, Eastern Europe, SEA & Pacific, China and Middle East & Africa. 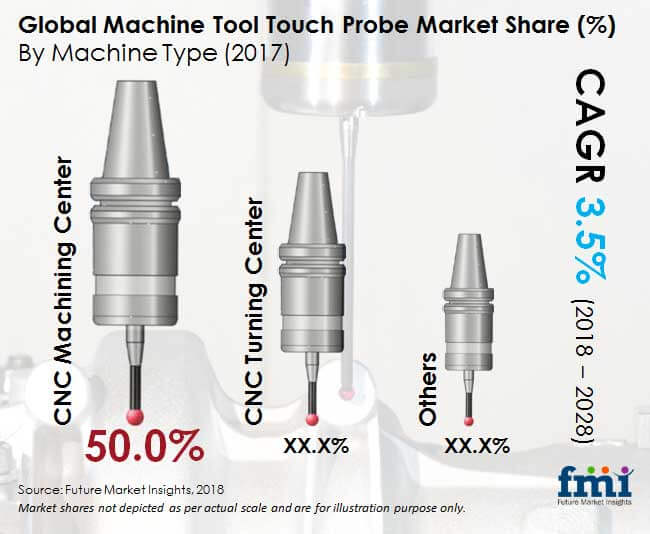