An Incisive, In-depth Analysis on the Medical Physics Market

This study offers a comprehensive, 360 degree analysis on the Medical Physics market, bringing to fore insights that can help stakeholders identify the opportunities as well as challenges. It tracks the global Medical Physics market across key regions, and offers in-depth commentary and accurate quantitative insights. The study also includes incisive competitive landscape analysis, and provides key recommendations to market players on winning imperatives and successful strategies.

Healthcare facilities are looking to cut expenses, due to which they outsource a number of services, which include medical physics. This can be attributed to the high cost involved in training or skill update certification, which is not likely to be possible in an in-house setup. In several medium or large facilities, a hybrid arrangement exists, which includes an in-house medical physics department that is supplemented with contracted services.

A highly fragmented market, enhanced regulatory protocols, and increased consolidation of healthcare systems & hospitals are some of the factors driving the trend towards increasing mergers and acquisitions. There has been a significant increase in mergers and acquisitions in the medical physics market. For instance, in 2014, West Physics acquired Medical Physics Inc.

In the past decade, there have been remarkable advancements in the nuclear medicine practice owing to noteworthy advancements in information technology, instrumentation, and radio pharmacy. These factors are significantly boosting the medical physics market. The emergence of new technologies, which include SPECT/CT and PET/CT, has encouraged the adoption of nuclear medicine. In addition, other hybrid modalities, which include the development of new radiopharmaceuticals as well as SPECT/MRI, are also expected to drive new therapeutic and diagnostic applications. 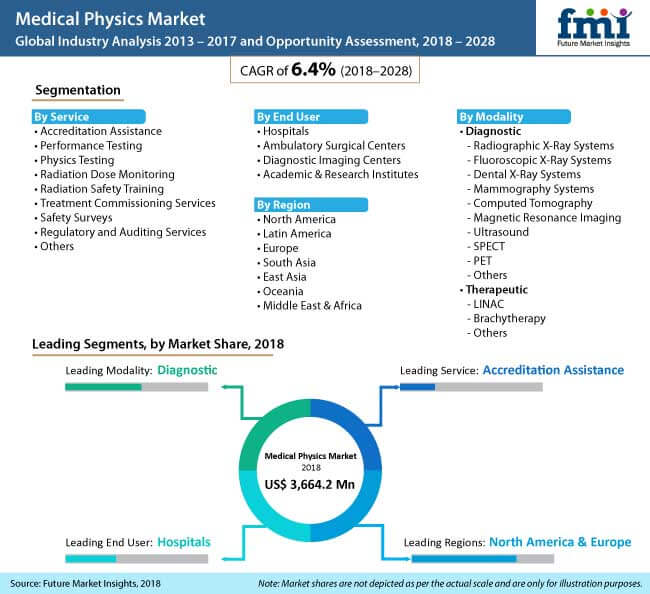 An in-depth review of the growth drivers, potential challenges, unique trends, and opportunities for the market participants is expected to equip readers to fully comprehend the overall landscape of the medical physics market. The report on the medical physics market also covers an analysis of the key regions and countries of particular interest, which are estimated to become frontrunners or remain laggards over the forecast period. The report covers a historical analysis of the market from 2013 to 2017, and provides forecasts from 2018 to 2028 in terms of revenue in US$.

Subsequently, the chapter on the market background contains relevant economic indicators, such as per capita healthcare spending and increase in cancer cases, which elaborate the dynamics impacting the medical physics market, as well as provides an explanation of the factors considered important to develop forecasts and estimates. The following chapters dive deep into the global medical physics market, covering detailed information based on modality, service, and end user. The next set of chapters provide a region-wise analysis and forecasts of the medical physics market, which cover the vital aspects of the market in North America, Latin America, Europe, East Asia, South Asia, Oceania, and the Middle East and Africa.

A dashboard view of some of the key companies operating in the medical physics market in terms of their offerings, regional presence, and other metrics is a precursor to the detailed profiles of these participants, which include their financial information, strategy overview, and services offered, as well as analyst commentary.

Our team of analysts reviews and interpret data from a variety of sources. The data attributed to ‘FMI’ is derived by using a combination of various approaches, which are then consolidated, interpreted, and extrapolated by FMI analysts. Data is sourced from government statistics, trade associations, company annual reports, investor presentations, press articles & directories, technical publications, and online databases, which are cross-referenced with FMI’s reports and internal repository of data to filter and validate the collected information.

The intelligence gathered from desk research is supplemented by extensive interviews with selected key expert participants across the value chain not only to gain information specific to their role and operations, but also to obtain their perspective and insights of the issues impacting the medical physics market.