Because micronized salt purity level is around 98%, producers are increasingly replacing regular solar salt with micronized salt to reduce impurity and increase efficiency in a variety of food and beverage applications. A slew of these factors are expected to propel the global micronized salt market.

This move to micronized salt has been aided by proven efficacy and conformity with existing industrial processes. With increased government involvement to limit traditional salt overconsumption, the market for micronized salts is likely to remain stable and grow at a CAGR of more than 3.6% over the forecast period.

Because micronized salt is now an essential ingredient in so many foods, this market is expected to grow at a steady rate alongside the food industry in the coming years.

The rise of e-commerce and the consequent reliance of consumers on home-delivered food is another important growth factor for the micronized salt business. Food delivery firms will thrive as a result of increased digitization and the resulting desire for convenience. This rising demand provides a boost to the processed and ready-to-eat food industries, which is expected to propel the micronized salt market ahead. 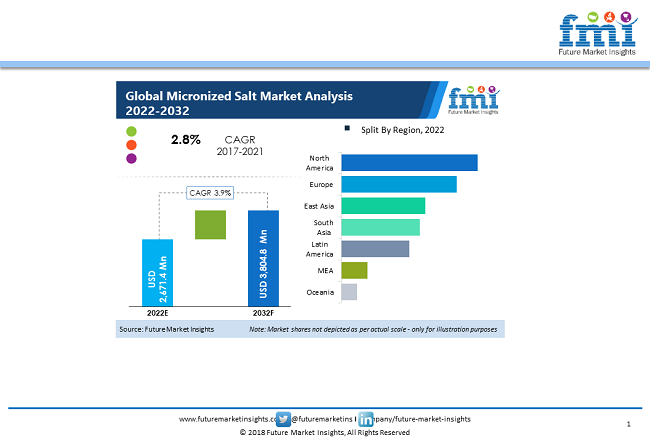 With high production and consumption, Asia-Pacific is one of the top regions for micronized salt. China and India are projected to control roughly 30% of the worldwide micronized salt market. Over the projected period, multi-national corporations are expected to invest in local suppliers and distributors to establish new revenue streams, resulting in high demand growth from the Asia-Pacific region.

Due to the increase of e-commerce, the Asia Pacific region is expected to grow significantly throughout the projection period. In addition, as the processed food business establishes itself in these areas, the trajectory will shift upward. Similarly, the increasing meat processing business in Latin America will provide new growth prospects for participants.

The ASEAN countries' and India's food processing industries are expected to augment this growth. Over the forecast period, the area is expected to grow 1.5x times, retaining the majority share.

Micronized salt with purity as high as above 99.5% dominated the market in 2021. One of the main drivers of demand has been the use of micronized salts of high quality in preservatives. The expansion of high purity micronized salt is predicted to be supplemented by widespread use in confectionery and bakery for the creation of snacks, baked goods and other items.

Micronized salt is used in bread and confectionery items, poultry, meat and seafood, milk and dairy products, drinks, canned/preserved fruits and vegetables, prepared meals, and other applications. By the end of 2032, the bakery & confectionery products section is predicted to have the greatest value share of all the segments, followed by poultry, meat, and seafood.

Top manufacturers have been attempting to build a foothold in the industry by expanding regionally. By the end of the forecast period, the top players in the micronized salts market will control more than 40% of the market.

How much is the micronized salt market current worth?

Currently micronized salt market is worth more than USD 2,578.6 Mn.

Micronized salt consumption is expected to grow at a CAGR of around 3.6% during the period 2022-2032.

What is boosting micronized salt sales?

The primary factor driving the growth of the micronized salt market is the rising appeal in the processed food industry due to its consistency and purity.

The top 5 producers of micronized salt hold around 18-20% of the market share.

Which are the major countries driving demand for Micronized Salt?

The US, India, and China are the major countries driving demand for micronized salt.

Who are the major players in micronized salt market?

What outlook does East Asia provide?

At what rate will the U.S. micronized salt market grow?

US micronized salt market is projected to grow at a CAGR of around 3.3% over the next ten years.