In order to assess the global value sales in the Military Parachute market, we analyzed the parent market overview to arrive on market numbers. Also, the sales of each Military Parachute type (round type, cruciform parachute, ribbon and ring, ram air to name a few) in the global market has been analyzed for all the key countries as well as for key regions considered under the scope of this research.

Increase in military expenditure and rise in border conflicts (which results in an increase in the use of unmannded aerial vehicle for ISR activities) are altogether spurring the demand for Military Parachutes. Moreover, increasing demand for these parachutes from countries, such as China, India, the U.S., Germany and others, is also supporting the demand in the Military Parachute market. Increase in spending for personal protective equipment especially for Military personnel is expected to positively impact demand for military parachutes.

However, varied testing standards and methodologies, flammability standards are not clearly defined and different suppliers (to different armies) use different standards and testing methods to specify their products. For instance, the U.K. & European Union follow BS EN or BS EN ISO, the U.S. follows ASTM, ISO or NFPA standards and other developed nations have their own testing protocols. Therefore, it becomes difficult for manufacturers to supply their products to the global market.

The round type parachute is a prominent segment in the Military Parachute market. Round type parachutes can be used by a bunch of people at the same time. They are ideal to be used at relatively low altitudes. For cargo and military drop applications, mushroom or round shaped parachutes are preferred. According to insights developed while compiling this report, the demand for round type parachutes is estimated to be grow at a significant growth rate during the forecast period. 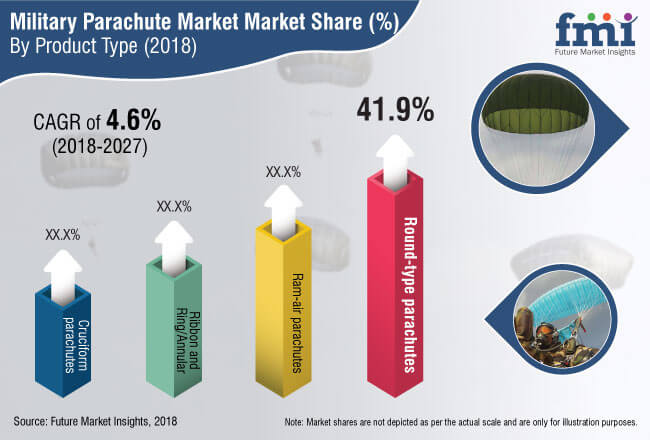 On the Basis of Application, Personnel Parachute to Be a Prominent Segment in Military Parachute Market

On the basis of region, the Military Parachute Market report is segmented into six regions: Europe, Latin America, North America, Japan, APEJ and MEA. North America will be a significant market, with maximum demand coming from the personnel parachutes segment.

That apart, North America is home to key parachute manufacturers, such as Airborne Systems, BAE System Plc and Mills Manufacturing, to name a few. Moreover, the region is also home to some of the important Military Parachute manufacturers, such as Spekon, Ballenger International, Safran SA, Butler Parachute Systems Group, Aerodyne Research, LLC and many more. All of these factors make North America a significant market for Military Parachutes.

Similarly, in October, 2016, the company introduced new Hi-5 Military Parachutes that have a glide ratio of 5.5:1 and can change to a glide ratio of 1:1 with a simple control input using the glide modulation system.