Military communications constitute a vital part of the security, economic, and scientific capabilities of several countries, worldwide. Regional governments are increasingly focusing on advanced communications technologies for enhanced   operational efficiency for improved security and digital communication capabilities. With growing use of smart devices and sensors in the defense sector, the market for military communications is likely to encounter with abundant revenue generation opportunities in near future.

Extended and rapid economic growth in Asia and increasing sophisticated military technology are transforming the global defense landscape. Rapid developments in defense infrastructure in various countries of the region are creating huge demand for military-technical capabilities. 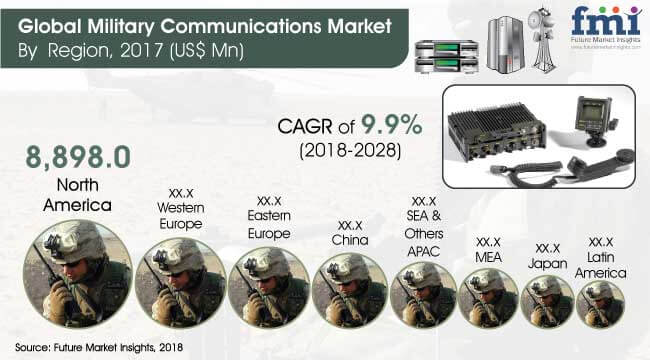 Through the next decade, North America is anticipated to lose its market value share, owing to highly progressing regions such as China, South East Asia and others of APAC, and Japan. The development of space infrastructure in emerging economies is presumed to create lucrative growth opportunities for several military communication solution providers. Growth in the defense infrastructure and satellite communication in ASEAN countries and prominently in India, has been creating immense scope for the growth of military communications market.

Multiple government initiatives towards the technological development of military communications will also support the growth of the market during the next few years. Growing need for upgraded communication systems, aerial surveillance vehicles, and battle space management systems is creating rapid demand for C4ISR (Control, Command, Communication, Computer, Intelligence, Surveillance and Reconnaissance) systems in the region.

The global military communications market has been segmented into: