Peripheral arterial disease is a condition in which the build-up of fatty deposits in arteries restricts the blood flow of muscles. Peripheral vascular disease refers to disease of blood vessels outside the heart, such as those of kidneys, limbs, gut and brain. Intravascular stent also known as vascular stent or endovascular stent is a synthetic tubular mesh structure used for permanent implant in graft or native vasculature. A stent is basically designed to provide mechanical radial support after assigning; the support is meant to improve vessel patency over the life of the device. After the stent is placed in the intended location, it is expanded by a balloon or self-expanding mechanism.

FMI estimates that the global market for peripheral vascular stents is expected to be valued at US$ 5,324.1 Mn by 2028 end, expanding at an impressive CAGR of 6.6% over 2018–2028. The self-expanding stents was the leading segment in the global market with above 52.1% revenue share in 2017. North America is expected to expand at healthy CAGR over the forecast period of 2018–2028.

The global peripheral vascular stents market is expected to be driven by increased awareness in low- and middle-income countries, growing investment by manufacturers and governments to cope up with increasing prevalence of peripheral artery disease, and technological advancement in vascular stents such as drug eluting and drug coated stents, etc. Nowadays, peripheral vascular angioplasty is mostly adopted in low-income countries such as Middle East and African countries, which is supported by public-private partnerships and alliances. 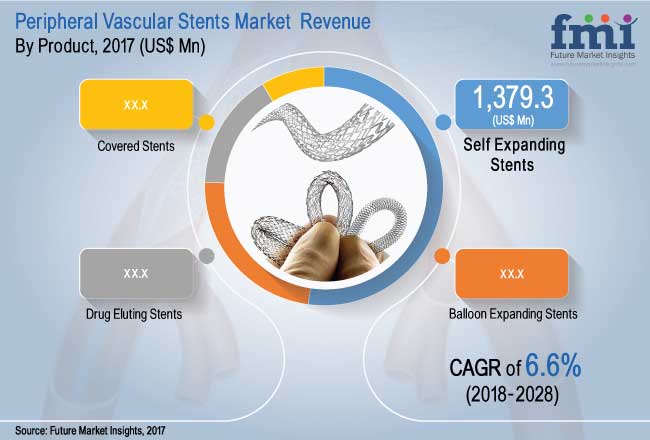 The Global Peripheral Vascular Stents Market has been segmented based on:

The report analyses the market based on regions and presents the forecast in terms of value (US$ Mn) for the next 10 years. The regions covered in the report include:

The next section of report analyses the market based on product types and presents the forecast in terms of value for the next 10 years. The product types covered in the report include:

The next section of the report analyses the market based on artery types and provides forecast in terms of value for the next 10 years. The artery types covered in the report include:

The next section of report analyses the market based on end user for peripheral vascular stents products and provides forecast in terms of value for the next 10 years. The end users covered in the report include: