The demand in the plant-based cheese market is poised to surge exponentially between 2020 and 2030, finds Future Market Insights (FMI) in a new study. Rising cases of food related allergies and dairy intolerance have been fuelling the demand for plant-based alternatives. Driven by changing consumer preference, the plant-based cheese market is expected to gain momentum. With some of the leading food service chains introducing vegan food items in their menu, the market has lucrative opportunities to capitalize on in the near future.

A new study by Future Market Insights (FMI) states that the global plant-based cheese market is anticipated to grow at 15.5% CAGR during the forecast period between 2020 and 2030. FMI attributes factors such as the rise in adoption of allergen-free and plant-based diet for the exponentially surging demand for plant-based cheese in the last decade.

As per the Google Trends, the online popularity of veganism is at all-time high after nearly doubling itself in the last five years. Spotlight is currently on veganism, especially as the trend gains celebrity endorsements.

Factors such as rising health concerns are highlighted, against which, various health benefits of vegan food items are discussed at length under various international campaigns. For instance, Go Vegan World was launched in Ireland in 2015. It is a Public Educational Advertising Campaign that aims at educating the world about animal rights and benefits of vegan diet.

These campaigns have come a long way creating awareness about veganism. Such initiatives are expected to bode well for the plant-based cheese market.

The incidence of diabetes, heart diseases, obesity, and others health concerns is showing no signs of slowing down. According to the National Center for Biotechnology Information (NCBI), the rate of obesity in the United States was 39% in 2011 and it is increasing at a rate of 5% per year.

Likewise, the World Health Organization (WHO) has identified diabetes as a major cause of blindness, heart attacks, kidney failures, lower limb amputation, and other health conditions. This has been encouraging an increasing number of consumers to shift to plant-based diet.

Plant-based cheese provides several health benefits such as lower levels of blood sugar, higher insulin sensitivity, lower risk for development of type 2 diabetes, and others. Additionally, plant-based cheese is highly recommendable for people who are sensitive to dairy-based products. Spurred by these factors, the market is poised to surge at an exponential CAGR over the forecast period.

Plant-based diet is highly nutritious, full of fibers, and also has various health benefits such as lowering cholesterol, stabilizing blood sugar, and others. The rising adoption of the vegan diet has spurred the growth of plant-based cheese market worldwide.

According to the European Data Journalism Institution, in Great Britain 3.25% of the population aged 15 years and above were found to be vegan in 2006. Vegan population in the Great Britain has further increased by 72.2% through 2016. In 2018, 87.5% of non-meat eaters became vegan in Poland.

Dairy products are rich in saturated fats which increase the risk of various diseases such as cancers (especially, breast, ovarian, prostate cancers), type 2 diabetes, Alzheimer’s disease, and others. Also, dairy products are not suitable for people with allergies and lactose intolerance. Plant-based cheese being free from all these risk factors is highly preferred by an increasing number of people around the world.

The increasing focus on environment-friendly products has been working as a catalyst to the growth of the plant-based cheese market. According to the United Kingdom International Diabetes Federation (UKIDF), the dairy farm contributes more than 90% of the greenhouse gas (CHG) emissions impact for cheese. Plant-based cheese is environment-friendly and hence highly preferred by the growing number of people.

According to the European Commission (EC), dairy systems have various negative environmental implications such as degradation of hydro-geological systems, loss of grassland diversity, affected soil integrity, and others. As more people are being concerned about the harmful impacts of the dairy systems, they are going for plant-based options in order to protect the environment. This has significantly risen the demand for plant-based cheese.

Plant-based cheese are made with the components such as protein, fats, and milks (plant milks) derived from vegetables. The entire process cycle of plant-based cheese production depends on the availability of a lot of raw ingredients, time, and cost.

In addition to this, plant-based cheese is often made with added preservatives and lacks some of the classic nutritional values of dairy based products, which make it not so suitable for the growing kids, elderly people, or anyone in need of high nutrition.

Often the lack of resemblance in taste and texture between plant-based cheese and their dairy based alternatives might restraint growth of the market.

Presently North America is dominating in the global plant-based cheese market. The increase in rate of people adopting vegan diet in the region, coupled with the rise in environmental awareness, is boosting the growth in North America. 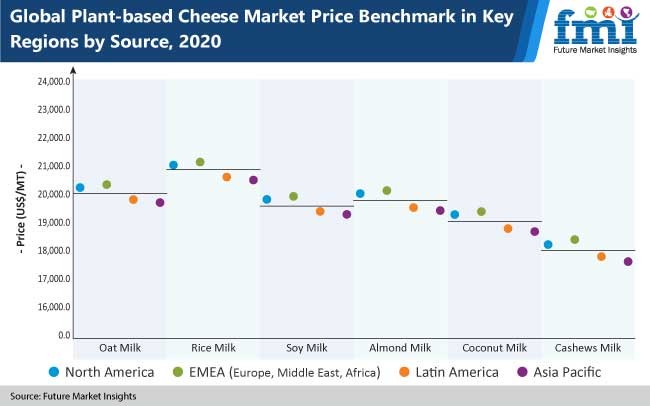 Also, as per a study, titled “Vegetarians in America” published by the Vegetarian Times Magazine, the vegan demography in the U.S. is rising fast. The rising inclination towards plant-based alternatives of dairy products in the countries such as the U.S., Canada, and others is expected to create growth opportunities for the market in North America.

EMEA (Europe, Middle East, and Africa)  is the second leading market of plant-based cheese in the world and shows high potential for sustaining its position in the coming years. The growing vegan population in Europe is significantly aiding to the growth in Europe plant-based cheese market.

According to the European National Statistics, the adoption of ‘veganism’ has increased seven fold in the five years between 2014 and 2019 in Europe. Furthermore, several negative sides of the dairy systems have enabled more people to go vegan. For instance, 30% of cows bred for dairy in the U.K have mastitis, a bacterial infection in the udder.

As the trend of adopting vegan diet tends to persist, EMEA is expected to sustain its position.

Asia Pacific  has emerged as a highly lucrative market for plant-based cheese and is forecast to register exponential growth in the coming years. Abundant availability of an extensive range of sources such as oat milk source, corn milk source, and others is contributing to the steady expansion of the East Asia market.

The top vegan-friendly countries such as China, India, Malaysia, and others are boosting the growth in East Asia due to high demand for plant-based cheese. According to the statistics of the United Nations Food and Agriculture Organization (UNFAO), India has over 500 million vegetarians. This has significant contribution to the surge in demand for plant-based cheese.

Oat milk is the most preferred source for producing plant-based cheese owing to its various health benefits. For instance, oat milk is a great source of vitamin B, it is an excellent for bone health, besides having other health benefits. It is naturally free from lactose, nuts, soy, and gluten and hence highly preferred by people with gluten intolerance, lactose intolerance, and others.

Plant-based cheese is often used in a wide variety of food recipes, starting from various kind of cheese dips to vegan cheese-plate, pizza, burger, sandwich, and others. As a result, it is highly sought-after in various B2B sales channel such as restaurants, café, and others.

As the B2B sales channels are getting more developed, it is expected to further fuel the sales of plant-based cheese in the coming years. According to the United States National Statistics, the restaurant industry’s projected sales in 2020 is an estimated $899 billion. The steady expansion of the B2B sales channels is expected to catalyze the growth of the market in the coming years.

For instance, Kite Hill launched its new range of plant-based cream cheese alternative such as PLAIN, CHIVE, EVERYTHING, and others in 2020.

WayFare Foods launched its new range of plant-based cheese such as cream cheese, nut-free cheese, soy cheese, and others in 2020.