By end use, chemical containment and pump bases building industry together account for more than 30% market share.

Polyester continues to be the preferred choice for manufacturing of polymer concrete and accounts for more than 25% of market share.

Europe and US are among the leading markets for polymer concrete market.

The rapid rise in infrastructural activities on a worldwide scale has been driving the demand for specialised applications where polymer concrete could be used; for instance residential and commercial applications. To underscore this point, we can consider the example of Asia Pacific, where there has been a significant rise in demand for sewerage pipes. The increasing population has been necessitating the need for upgrade of sewerage systems to higher capacities, which is expected to drive the demand for polymer concrete products, which in turn would drive the global polymer concrete market in the near future.

Also, the construction of new roads, dams, bridges and upgrade of sewerage systems in countries such as China and Latin American countries is expected to present an attractive opportunity for the growth of the polymer concrete market in these regions. In addition, in the Middle East, there has been a considerable use of polymer concrete in infrastructure building such as in the construction of buildings, solid surface countertops in home interiors, roadways, bridges, pipes, tunnel liners and in other civic infrastructure.

Presently, polyester is the preferred choice for manufacturing polymer concrete products. The Polyester segment by material type is estimated to hold more than 25% of the global market share in 2017. This is primarily owing to the low cost benefit offered by polyester when compared to vinyl ester, epoxy and other resins. However, Future Market Insights estimates the Polyester material type segment to lose 90 BPS by the end of 2027.

The Polyester segment is estimated to be valued at more than US$ 80 Mn by 2017 end and is projected to create an incremental $ opportunity of US$ 87.0 Mn between 2017 and 2027. The Others segment is expected to gain significant BPS due to ongoing research in the use of new and advanced ingredients such as Methyl Methacrylate, Polyurethane, and Urea Formaldehyde resin. However, the rate of adoption is expected to remain relatively low. 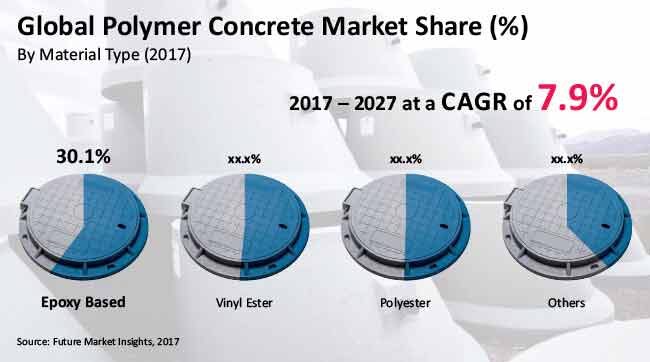 For example, there has been an increase in industrial applications of polymer concrete such as in waste containers, pump bases, industrial flooring blocks, chemical containments and trench drains. In Europe, the energy and utilities, chemicals, metallurgy and pulp and paper industries have been extensively using polymer concrete in flooring applications as an effective means to resist chemical attack and prevent corrosive effect of chemicals.

What is the size of polymer concrete market?

Which are the leading companies in polymer concrete market?