Shale Gas Hydraulic Fracturing Market: US to Remain Global Leader in Terms of Production, Technology, and Exports: Canada, US, and China Industry Analysis 2012 - 2016 and Opportunity Assessment 2017 - 2027

The shale gas hydraulic fracturing markets in Canada, US, and China are expected to individually register impressive growth over a 10-year forecast period. While US is anticipated to remain the global leader, China is foreseen to be a lucrative region thriving at the fastest CAGR value. In terms of volume, the US market that represented a production volume of 18,059 BCF in 2017 is estimated to grow at a 9.8% CAGR through to 2027, whereas the 317.6 BCF Chinese market is likely to witness a stellar CAGR of 21.2%. Canada’s shale gas hydraulic fracturing volume was 213.3 BDF in 2017, which is expected to reach up by a CAGR of 8.4% over 2017-2027.

The world today is dependent more on unconventional energy resources, including shale gas. It is presumed that by the end of 2027, the development of shale gas in the top regions across the world, i.e. North America and China, will gain robust traction in the coming decade, reaching a peak level. The US is likely to bring in innovative opportunities and promising circumstances for players, owing to increasing use of relatively cheaper energy resources. This region is projected to lead the global industry for shale gas in terms of sales and currently holds over two-third of the market in terms of value and volume.

Dominance of the US in shale gas hydraulic fracturing thus revolutionizes North America’s overall energy scenario and also holds a strong impact on the global energy domain. In terms of technology, exploration, development, production, and export of shale gas, the US will be the global leader throughout 2017-2027.

Shale gas hydraulic fracturing is a popular shale gas production process that involves extraction of trapped natural oil or gas by fracturing the shale rock, eventually enhancing the flow of natural oil or gas that needs to be recovered. Although the prices of natural gas have been seeing an affordable decline since the recent past, the real boost to the market in the US is being provided by greater convenience of shale gas production through hydraulic fracturing compared to that through the conventional method.

However, heavy consumption of water during shale gas production through hydraulic fracturing may turn out to remain a major challenge to growth of this process. Moreover, both production and transportation of shale gas tend to release a heap of toxic pollutants in underground water, which is another factor that will continue to hold a strong negative impact on growth of market in near future. 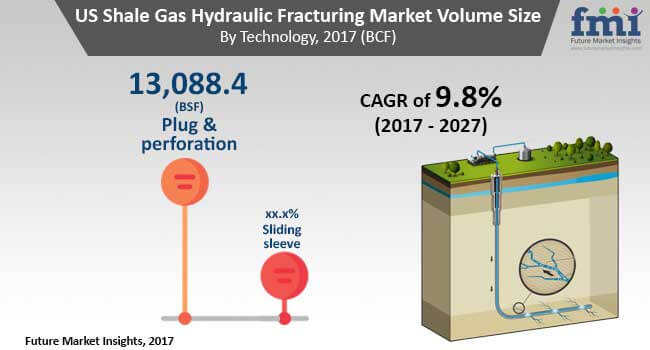 By technology, plug and perforation segment covered maximum volume share of the US market and is expected to continue dominance through to 2027. This dominance is attributed to indispensable benefits that this process has brought to the US market for shale gas production through hydraulic fracturing. The plug and perforation segment recorded a volume of 13,088.4 BCF in 2017, which will possibly expand at a CAGR of over 10% by 2027-end.

Sliding sleeve segment will however thrive at a relatively lower CAGR of over 8% during 2017-2027. Technological innovations such as novel water treatment and management solutions, a major shift from vertical (conventional) vertical drilling to more profitable and eco-friendly horizontal drilling, and emergence of pitless drilling technology are looked at as significant boosters to US market growth in shale gas hydraulic fracturing.

As far as key players in the shale gas hydraulic fracturing industry is concerned, a majority of global key players are based on the US, contributing to the region's fostering growth over the years.

Future Market Insights’ report on Canada, US, and China’s shale gas hydraulic fracturing markets on the basis of technology and application.

View Our Reports from Oil and Gas