Smart Water Bottle are also known as interactive water bottle. Smart water bottle are used to update the user on the hydration level in the body. The bottle collects the various information from the user such as age, weight, temperature etc. and tracks the time and amount of water intake by the user and automatically provide the update to consume water before the body gets dehydrated according to the information gathered by the bottle. Rise in Per Capita IT spending and growing concern towards healthhas brought a considerable shift in among the people towards smart water bottle 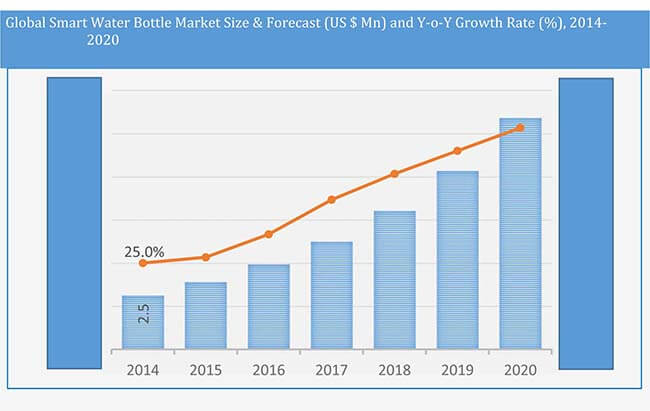 Geographically, the market is segmented into fiveregions namely North America, Latin America, Europe, Asia-Pacific and Middle East and Africa. North America is the dominant market for smart water bottle and likely to grow at a fastest pace compared to other region followed by Europe. This growth is attributed by the easy acceptance of newer and advanced technology with high purchasing power in the developed countries

Some of the market leaders in the smart water bottle market are BluFit, HydraCoach and Caktus Inc.