Leading suppliers of sulfuric acid are channelizing efforts towards developing partnerships with end users, such as fertilizer manufacturers, in order to better address the demand and specific requirements. A majority of the global sulfuric acid output is obtained as a by-product from refining of mining minerals.

Efforts are being put on the part of mining companies towards improving efficiency to increase production as well as reduce the overall operational cost and increasing profitability during the times of lower selling prices.

At present, Canada is one of the major exporters of sulfuric acid to the United States. Globally, oil and gas are prominent sources used for the production of sulfuric acid, which are mainly supplied by the Middle East region.

Canada and the U.S. are the third and seventh largest consumers of crop nutrients in the world. In 2014, total arable land in the U.S. and Canada was over 380 million acres and 113 million acres, respectively. According to the Food and Agriculture Organization of the United Nations, the consumption of fertilizers in North America increased from 23.9 Mn MT to 25.2 Mn MT between 2014 and 2015. North America is the largest consumer of fertilizers.

Thus, any increase in the consumption of fertilizers is, in turn, expected to drive the demand for sulfuric acid over the forecast period. The case is similar with Latin America, in Brazil and Argentina where the agricultural land is available in plenty.

The use of fertilizers has also taken a significant surge in the region. Thereby, fertilizer manufacturers are channelizing efforts to cater to the increasing demand for phosphate fertilizers, which, in turn, has resulted in an increase in the demand for sulfuric acid.

This is subsequently expected to drive the growth of the sulfuric acid market over the forecast period. 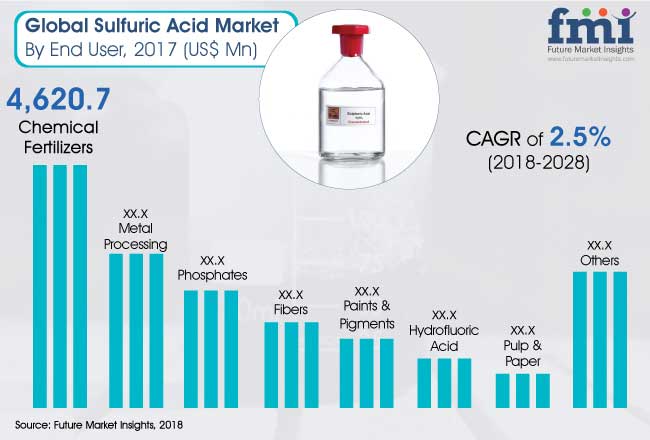 In APEJ or Asia Pacific excluding Japan, China dominates the copper and zinc metal markets in terms of production. For instance, in 2015, production of copper in China was around 1.7 Mn MT whereas zinc was around 4.3 Mn MT through mines.

High production capacity of copper and zinc metal in the APEJ region coupled with rising demand from end-use industries is, in turn, expected to lead to an increase in production through the mining of these metals. Production of metals from their ores requires significant amounts of sulfuric acid, which is consequently expected to drive the demand for sulfuric acid.

Owing to the aforesaid factors, the demand for sulfuric acid is expected to increase exponentially over the coming years across the globe. Other end-use industries are also increasing their consumption of sulfuric acid owing to its versatile characteristics.

The global sulfuric acid market has been segmented into: