The growth of clean label trends and rising consumer interest in organic and natural foods has resulted in growing cultivation and adoption of vanilla beans in food and cosmetic products around the world. This also has led to steadily increasing demand for vanilla beans in the recent past. The trend is unlikely to slow down especially on account of the rising consumption of functional foods throughout the coronavirus pandemic.

The report released by Future Market Insights, gives readers essential insights on the influencing factors on revenue and sales between the assessment period between 2020 and 2030. Madagascar vanilla beans in particular are estimated to stay in higher demand, with liquid extracts gaining attention for wide-ranging food and beverage applications.

The global vanilla beans market is projected to display strong growth on the back of increasing demand for bakery and frozen dessert items, which in turn is supported by the increased consumption of processed food and the rise in average disposable incomes. The consumption of foods with vanilla beans is particularly higher among the millennial demographic who are more likely to display interest towards flavor experimentation.

In addition, with the advent of the coronavirus outbreak, the demand for functional foods has also soared in 2020. This has resulted in lucrative opportunities for manufacturers, as vanilla bean extract has been found to provide a range of health benefits including low calorie counts, prevention of colds and respiratory infections.

These benefits also provide opportunities for vanilla bean producers for applications within the pharmaceutical and nutraceutical industries owing to anti-microbial and anti-oxidant characteristics.

According to the Sustainable Vanilla Initiative, issues of supply chain traceability, and volatility of prices and product quality have been problems impacting vanilla bean producers around the world. With growing demand for natural and organic food ingredients, organic vanilla bean products are rapidly gaining ground, owing to the elimination of chemical fertilizer and pesticide.

The use of all-natural vanilla to increase the organoleptic properties of food products is also supporting the adoption of organic vanilla beans globally. Despite higher pricing, growing health awareness from consumers is supporting steady growth in sales over the past few years. The trend is likely to continue throughout the forecast period.

Also, sustainability initiatives are promoting organic cultivation practices to improve incomes, promote traceability across value chains, and aid in standardization of quality coming from vanilla plantation yields, particularly in terms of regulations associated to ingredients in Europe and North America.

The ongoing coronavirus pandemic has had a notable impact on the vanilla bean market. The shut down of food service businesses in many parts of the world has resulted in a significant drop in demand. Also, higher costs of natural vanilla beans, and competition from synthetic vanilla flavorings and fragrances challenges industry participants. Also, the reduced production of cosmetic products during the outbreak has also reduced demand. Another key issue challenging the vanilla bean industry includes ethical issues such as the use of child labor and poor pay and working conditions for workers in vanilla bean cultivation sites, which hurt long term prospects of the sector.

Europe is currently the largest market for vanilla beans and derivative products, and the trend is unlikely to change throughout the forecast years till 2030. The market is expected to provide lucrative opportunities to producers internationally for high-quality vanilla yields.

Supply chain issues from Madagascar, which is the primary supplier, in recent times has resulted in a shortage of vanilla beans creating opportunities for suppliers in other parts of the world, particularly those who are certified for organic produce or Fairtrade practices.

Growth in global vanilla bean market price is a major challenge for the vanilla bean industry in Europe. The shortage of the commodity and the resultant price spikes are generating lucrative opportunities for suppliers providing stocks at reasonable costs, owing to the high popularity of the spice in the region.

The demand for vanillin in North America has grown over the years, as the ingredient becomes mainstream in food, personal care, cosmetics, and pharmaceutical products. High prices associated to natural vanilla extract is creating lucrative opportunities for local cultivators, particularly in southern United States.

Such efforts towards local production could also provide impetus to efforts in conserving native vanilla species, which is likely to gain positive growth in the years to come.

Following Europe and North America, East Asia is displaying fairly lucrative prospects for vanilla bean producers. Across the region, the vanilla bean market will gain from growing consumer awareness amidst a large population and the resultant increase in international trade.

Chinese government bodies such as the Yunnan Flavor and Fragrance Research and Development Center have initiated efforts to produce vanilla beans locally, with several hectares of plantations in the Yunnan region alone. However, fluctuation of international prices and issues stemming from the decision by Madagascar to decontrol its supplies hurt Chinese prospects.

Japanese governments have also pushed to leverage the global demand for vanilla beans through local production projects, which also double into employment programs for populations in lower economic strata in the region, creating new market opportunities. On the other hand, the market for vanilla beans in South Korea largely remains reliant on imports from countries such as Indonesia. 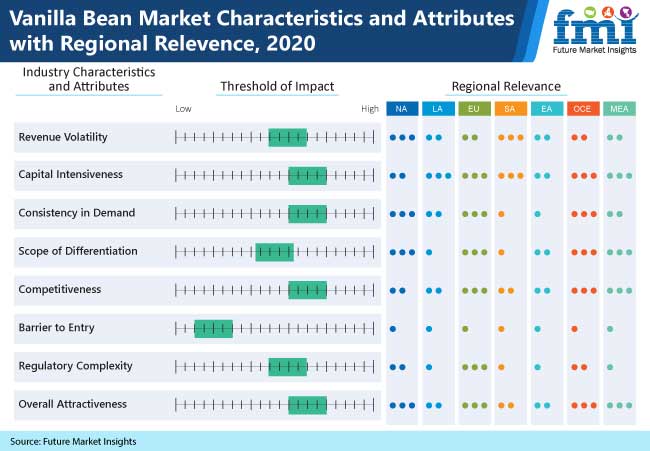 Madagascar will remain a leading producer for vanilla largely owing to low labor costs in the agriculture sector. Similarly, Uganda is also expected to display positive prospects in the near term, supported by labor cost advantages.

While the certified organic vanilla sector is reflecting a faster growth rate, the industry is fairly nascent. Conventional vanilla beans on the other hand contribute to approximately 94% of all vanilla bean yields in terms of both volume and value.

This dominance can be largely be attributed to cost benefits to end users. Also, lack of standardization inn terms of organic cultivation regulations also hurt prospects of organic vanilla beans, restricting scope of growth in the long term.

Vanilla beans are available in whole bean and extract forms. In turn, vanilla bean extracts are available in liquid, powder, and paste formats. Of these, liquid extracts are highly sought after. This growth can be attributed to the standardization of product quality, cost benefits and easier use, especially among food processing industry end users. On the other hand, powdered variants are displaying lucrative opportunities owing to bakery applications and long shelf life.

Under B2B distribution, vanilla beans are sold under the food & beverage, cosmetics, personal care, and pharmaceuticals sectors. B2B distribution accounts for more than 90% of all sales and revenue. Of these, food and beverage applications account for most revenue. However, health benefits are bolstering promising growth prospects in the pharma sector.

Halal certified vanilla bean products are also gaining ground. These products are extracted without the use of alcohol, and use carbon dioxide and reverse osmosis instead. Consequently, vanilla beans generate lucrative opportunities amidst the vast Muslim population around the world.

The ongoing covid-19 pandemic has resulted in closure of food service businesses, limiting the demand for vanilla beans among users in the sector. Market players will have to pay attention to potential opportunities in the healthcare and pharmaceutical sectors to minimize short-term losses.

Symrise AG, has joined hands with Kellogg for a program of cultivation for responsibly sourced Madagascar vanilla beans, aiming to strengthen supply chains and geographic expansion, in addition to setting up sustainable value chains, following the challenges of sourcing arising from the covid-19 pandemic. The company has also invested in upgrades for the extraction process for its vanilla extract plant in the US, to retain volatiles in the extracts, for better product quality.

Eurovanille, based out of France has announced its plans to open a vanilla plantation in Meghalaya in North-eastern India. The endeavor pushes to leverage international demand for organic and rainforest-grown vanilla.

Aside from these players, other major producers include:

What is the size of the vanilla bean market?

Which is the largest market for vanilla bean?

Europe is currently is the leading market for vanilla beans. Extensive application of vanilla bean in food and cosmetics production in the region contribute to market growth.

Which are the top companies in vanilla bean market?

Some of the leading companies operating in the market are Tharkan and Company, Daintree Vanilla and Spices, Neilsen-Massey Vanillas Inc., Farooqi Vanilla Beans, Venui Vanilla, and Varanashi Research Foundation.

What are the applications of vanilla bean?

Vanilla beans are primarily used in the food and beverages sector for a wide range of cuisines. Vanilla beans are also increasingly being used by cosmetics and personal care product manufacturers, and in niche pharmaceutical formulations.

In what types are vanilla bean available?

Vanilla beans are found in five major types based on the region of origin. These include Madagascar, Indonesia, Mexican, Tahitian, and Ugandan. Of these, Madagascar vanilla beans are witnessing high demand and are projected to account for approximately 40% of the overall market share by 2030.

What is the outlook on vanilla bean market?

Vanilla bean producers are leveraging the changing consumer bias towards natural and organic food and cosmetics ingredients, with the growing awareness about health risks coming out of synthetic alternatives.

Countries in South Asia are displaying lucrative opportunities for growth, which can be attributed to the demand for chemical-free foods among consumers in the region and growth of western influences in cuisine.