The vegan protein bars market will continue exhibiting impressive growth as an increasing number of consumers focus on health and wellness. With plant-based diet scaling in popularity, vegan protein bars sales are poised to surge in the coming years. Future Market Insights (FMI) has presented a positive outlook for the market for the assessment period, starting from 2020 to 2028. While production restrictions might hamper growth during COVID-19, recovery is on cards, especially due to the widespread adoption of vegan diets worldwide.

The World Health Organization (WHO) has declared that at least 80 percent of all heart diseases, strokes, and type 2 diabetes cases and up to 40 percent of cancers can be prevented if people modify their eating habits, and are engaged in more physical activity and quit uptake of tobacco. Such statements from the biggest of organizations are further drawing people toward changing their lifestyle. As a result, there has been a rise in the population that works out regularly. This is adding to the consumption of products having vegan protein bars.

Future Market Insights (FMI) has published a vegan protein bar market analysis, which has projected the market to exhibit a CAGR of 12% between 2020 and 2028.

Governments across the world and international organizations are increasingly launching health initiatives and strategies. For instance, the WHO, in 2004, initiated the Global Strategy on diet, physical activity, and health. The center of this strategy was to formulate and execute an effective approach to reduce deaths and disease burden globally by changing diet and promoting physical activity.

Such initiatives are increasing the demand in the vegan protein market. According to the data published by Forbes Media LLC., 1% of Americans was vegan in 2014. The vegan population in the U.S. surged to 6% in 2017. The demography of vegan population will continue surging around the world. This is in turn creating growth opportunities for the global vegan protein bar market.

Increasing intolerance among consumers for animal protein is projected to create lucrative opportunities for the players operating in the market. According to the World Allergy Organization, in 2018, nearly 220 to 520 million people around the world were experiencing food allergies, of which two-thirds were associated solely with egg allergy.

Rising cases of food-related allergies are encouraging consumers to displace dairy and meat products with plant-based alternatives. With focus on health and wellness increasing, the demand for vegan nutrition bars is poised to surge in the coming years.

Owing to increasing awareness about health and animal cruelty, the vegan and flexitarian population across the globe is consistently growing. Veganism is stronger than ever, which can be seen from the rising vegan population from countries whose cuisines are greatly meat and dairy-based. According to a report by food-centric media outlet Chef’s Pencil, veganism has gained significant in the last five years and has no signs of slowing down.

According to Berlin-based plant-based supermarket chain, Veganz, in Europe, about a quarter of the population is now actively reducing meat intake and representing fastest rise in flexitarianism. With more and more people opting for veganism and flexitarianism, the market for vegan protein bars will continue to grow.

The COVID-19 pandemic has created both challenges and opportunities for players operating in the market. During the initial phase of the pandemic, operations across manufacturing units had come to a halt. Owing to restrictions on transportation and social distancing norms imposed by governments, there was shortage of raw material and machine operators. Besides this, fluctuations in the prices of raw materials and taxes also triggered the situation.

On the flip side, the overall impact of the pandemic on the market is positive. Due to fear of air-borne diseases, more and more consumers are switching to vegan protein diet. As a result, the demand for plant based protein bars is augmenting significantly.

Manufacturers of vegan protein bars reported a rise in demand after the first quarter of the pandemic. Furthermore, due to high health risks posed by COVID-19to patients with underlying conditions such as diabetes, consumers are choosing products with low-sugar and low-fat levels and high nutritional value. Such an unpredicted rise in the demand has encouraged market players to change their strategies to fulfill the demand of consumers amid COVID-19.

High cost of vegan protein bars is one of the biggest challenges to growth of the market. Furthermore rising cases of soy allergy could pose threat to the market. The Food and Agriculture Organizations of the United Nations has included soy in the list of 8 most significant food allergens.

Inclusion of soy as a key ingredient in vegan protein bars is therefore regarded as a chief restraint. Since 2004, it was mandated by the U.S. Food Allergen Labelling and Consumer Protection Act that labels of food containing information regarding ingredient that is protein or derived from any of the “major food allergens” are compulsory. Such stringent regulations could restrict growth of the market to an extent.

Latin America is leading the market for vegan protein bars in terms of value. Several countries are launching guidelines, highlighting the benefits of a vegan diet, which is playing a significant role in augmenting the demand for vegan protein nutrition bars in Latin America. For instance, in 2014, Dietary Guidelines for the Brazilian population were passed by the Brazilian Ministry of Health, which highlighted the rightness of well-balanced plant-based diets. 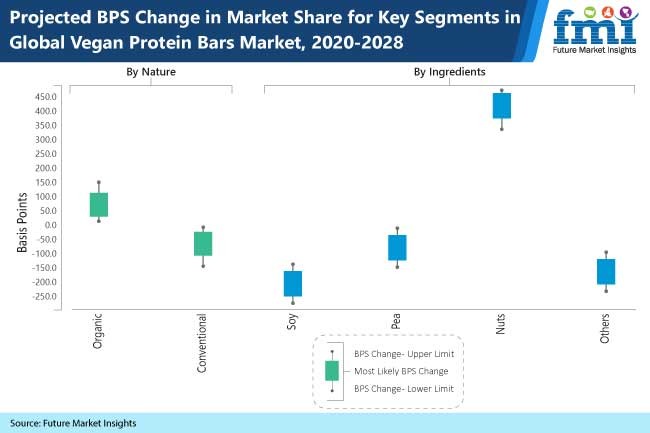 Besides this, rising focus of players on establishing their presence in other regions is one of the key factors supporting the growth of the market in Latin America. For instance, in January 2019, ADM extended its footprint in Brazil with the building of a new soy protein production network in Campo Grande, Mato Grosso do Sul, Brazil, at a value of US$ 250 million.

North America is an attractive market for vegan protein bars. Growth in the region is primarily driven by the rising number of fitness clubs in North America. In 2018, the International Health, Racquet and Sportsclub Association (IHRSA) stated that in the U.S., the health and fitness industry has been growing by at least 3 - 4% annually and the industry is showingno signs of slowing down anytime soon. Expansion of the fitness industry will bode well for the market for vegan protein bars in North America.

Europe is one of the lucrative markets for vegan protein bars. Stringent administration coupled with many organizations working with the European Union (EU) for animal protection is supporting the growth of the market in Europe.

For instance, Animals' Angels is an organization working with various EU bodies for stronger animal protection and better execution of existing acts. Such organizations are dedicated towards spreading awareness on animal welfare. As a result, more and more people in Europe are heading towards flexitarianism and veganism.

Besides this, rising spending on research and development (R&D) is a key factor boosting the growth of the market. For instance, in 2020, the European Commission released its Farm to Fork Strategy, an initiative under the new European Green Deal. This initiative outlines financial support of at least US$ 121.7 billion over the period 2021-2027 for the green transition and promises to make alternative protein products.

According to FMI, the conventional segment is expected to lead the market by nature. Besides this, the organic segment is forecast to exhibit remarkable growth during the forecast period. Owing to rising health awareness, consumers are shifting their preference toward organic products.

Despite this, the conventional segment will continue leading the market. According to FMI, it accounts for over 80% of the market share. Over the course of the forecast period, the segment is expected to rise at above 11% CAGR.

In terms of ingredient, soy is currently dominating the global vegan protein bars market. However, the nuts segment is expected to record higher rate of growth during the forecast period owing to its high nutritional value. Besides this, rising incidence of soy allergies has been shifting consumer preference towards nuts vegan protein bars.

Based on distribution channel, online retailing is forecast to emerge as a lucrative segment during the forecast period. Online retailing is already gaining traction amid COVID-19 and is expected to remain a preferred sales channel even as the pandemic passes.

According to a report by ecommerce behemoth Shopify, the global e-commerce sales are expected to surpass US$ 4.2 trillion by the end of 2020. According to FMI, a large percentage of distributors are focusing on expanding their online presence, which will drive growth within the segment.

Competition in the global vegan protein bars market is getting tougher owing to the entry of several newcomers. As consumers are shifting towards healthier snacks that are combination of both taste and nutrition, vegan protein bar manufacturers are focusing on enhancing their product portfolio.

For instance, Nestlé declared the launch of its YES! snack bars made from nuts and peas in a new recyclable paper wrapper. Besides combining two ingredients, for the first time a bar has been packaged in a paper utilizing a high-speed flow wrap technology.

Furthermore, established players in the market are adopting strategies such as mergers and acquisitions to maintain their positions. For instance, in October 2018, PepsiCo, Inc. announced the acquisition of Health Warrior, Inc a U.S.-based nutrition-forward company that manufactures nutrition bars. This acquisition further expanded the company's product portfolio.

At what rate the vegan protein bars market is forecast to grow?

Which is the largest market for vegan protein bars?

Latin America is the leading market. Growth registered in the region is driven by growing vegan population. Besides this, supportive government guidelines highlighting benefits of vegan diet are also supporting the growth of the market in Latin America.

Which are the top companies in the vegan protein bars market?

Some of the leading companies operating in the vegan protein bars market are BHU Foods, PROBAR LLC, Health Warrior, NuGo Nutrition, Gomacro, Garden of Life, Raw Rev and Risebar among others.

What is the outlook on the vegan protein bars market?

Due to increasing fear of air-borne diseases, consumers are increasingly adopting vegan diet. Thus, COVID-19 has posed a positive impact on the overall outlook of the market. Besides, rising fitness clubs and growing awareness about health and animals are further expected to augment the demand for vegan protein bars.

What are the key challenges witnessed in the vegan protein bars market?

High cost of vegan protein products is one of the biggest challenges for the market. Furthermore, researches also show that number of people with soy allergy is constantly rising. As soy is used widely in manufacturing, rising incidence of soy allergy is forecast to pose threat to the market.