With the rise in demand from the industries with fast-paced growth such as oil & gas, utilities, transportation, and others, the requirement for vibration control system has grown over the past decade. While development of broad categories of products such as isolating pads, absorbers, and dampers, manufacturers has catered to the market growth, the macro-economic factors such as rise in per capita expenditure on utility, increase in governmental expenditure on key end-use industries, and others have further fueled sales.

According to FMI, the global vibration control system market has expanded at nearly 3% growth since 2015.

While the surge in demand for various vibration control system such as isolators, hangers, and mounts is enabling manufacturers to diversify their products, the promising growth of key end-use industries is further aiding to the rise in revenue of manufacturers.

How Transport Sector is Driving Demand for Vibration Control Equipment?

Controlling vibration in various auto-parts plays a very crucial role in transportation industry and hence the demand from this sector is growing high with its steady expansion.

According to the report titled “Transport in the European Union” published by the European Commission (EC), recently EUR 15 billion have been proposed for mobility, energy, and climate in the ‘Horizon Europe Programme Post-2020’. As stated in the report, the Europe transport industry includes a complex network of around 1.2 million public and private companies, and this number is growing fast.

The Impact of Growing Automation on Vibration Control System Sales

Owing to higher production rates, increased productivity, improved safety & product quality, and other factors, the adoption of automation control is growing at a brisk pace.

According to the report published by the EU Automation, number of automation control parts has reached to 1.130,407 sold to 41,271 customers in 159 countries till date (16th February, 2021). The statistics depict the rise in demand for various automation control systems across the globe.

What are the Key Challenges for Vibration Control System Industry?

?While the rise in demand from key end-use industries is getting prominent gradually, high cost of installation, maintenance and replacement is something manufacturers are focusing on to improve. Also, lack of enough knowledge and expertise often come in the way of its wider adoption.

However, the high demand from the exponentially growing industries such as oil & gas, utilities, mining & quarrying, and continuous effort by key players to launch new cost-effective variety of products outpace these few restraining factors.

The United States is currently the largest vibration control system market. The significant growth of transportation, and oil & gas, and utilities industries is boosting the growth of suppliers in the U.S. 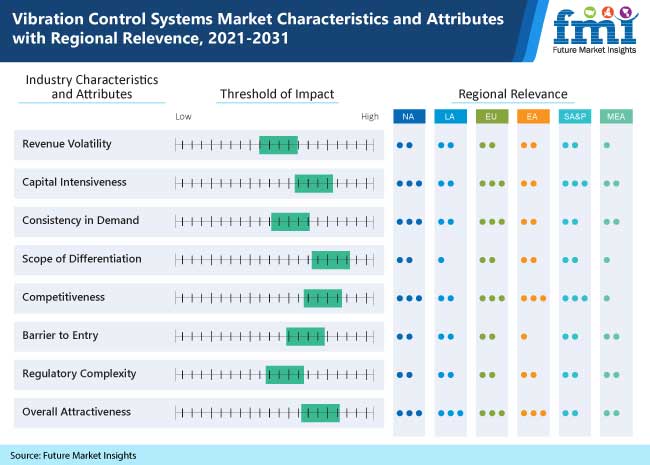 *Image for representation purposes only – actual data available in the report

According to the report published by the U.S. Bureau of Labor Statistics (BLS), trade, transportation, and utilities sector in the U.S. is gaining momentum and subject to excel further in the near future. As per the report, the number of production & non-supervisory employees in these sectors was 22,684 on October, 2020 and grew to 22,931 on January, 2021.

China has emerged as the most lucrative market for vibration control system in Asia Pacific, and is set to exhibit hegemony in this region throughout the forecast period.

The rise in demand from oil & gas, textiles, transportation, and others are projected to cater to the growth of vibration control manufactures in China in the coming years. According to the report published by the China Country Commercial guide by the Privacy Shield Framework, in 2018, China had record oil & gas imports and remains the number one crude oil importer in the world after surpassing the United States in 2017, while crude oil imports rose 10.1% in 2018.

The statistics gives a glimpse of the growing opportunities for vibration control system manufacturers in China.

Why Germany has High Potential for Stakeholders in the Vibration Control System Manufacturers?

Germany being a key region is in the limelight for vibration control system suppliers. Backed by the highly advanced transportation, utilities, mining, and other industries, Germany market is set to expand further for key players.

According to The German Mineral Resources agency (DERA), they have taken initiative to contribute to a secure, affordable, and sustainable mineral raw material supply for Germany. This in turn with pave new paths for players in vibration control system industry.

The increase in demand from transportation, mining & quarrying, and other industries is fuelling the sales of vibration control systems in Russia. As stated by the Government of Russia, the Russian Government is pursuing a 6.3 trillion rubles (US$ 100.47 billion), six-year modernization plan to revamp the country’s transportation infrastructure through 2024. Definitely this will work in favor of manufacturers in Russia.

Why Automation Control is a Key Focus Area?

As a result, automation control system is gaining fast traction in diverse end-use industries starting from utilities to chemical manufacturing.

OEM or Aftermarket – Which is the Lucrative Sales Channel?

Presently, O.E.M (Original Equipment Manufacturer) sales type is dominating in the market followed by aftermarket. As vibration control system requires safety and reliability features for its extensive usage in broad end-use industries, original equipment manufacturers are more suitable to purchase from. As a result, this segment is increasing the sales of manufacturers substantially around the world.

Market players are focusing on new product launches and innovation to consolidate their position.

LORD Corporation launched its new extensive range of products such as Vibration Isolators, Industrial HCL Elastomeric Bearings, Micro-Mounts, and others during the last five years from 2016 to 2020

Is this research conducted by FMI?

FMI follows a methodology that encompasses demand-side assessment of the market, and triangulates the same through supply-side analysis. This methodology is based on the use of standard market structure, methods, and definitions. Request a detailed methodology.

FMI speaks to stakeholders across the spectrum, including C-level executives, distributors, product manufacturers, and industry experts. For a full list of primary respondents, please reach out to us.

Yes, you can request a sample, and it will be sent to you through an email.