The light-emitting diode (LED) is one of today's most energy-efficient and rapidly-developing lighting technologies. LEDs are smaller and have a comparatively long operating life along with lower cost of ownership compared to conventional lighting technologies. The prices of LED lighting products are reducing continuously and these lighting products are becoming the economic choice in both indoor and outdoor applications.

LED displays are a type of flat panel displays, which utilise an array of light-emitting diodes as pixels for image and video display. Due to their high brightness characteristics, they are used outdoors in store signs and billboards. Along with visual displays, LED displays offer general illumination and are also used for stage lighting and other decorative purposes.

Growth of the LED and OLED displays market in Africa is driven by factors such as growing subscriber base for smartphones and increasing consumer spending on television services. Introduction of off-grid solar powered television for the rural areas of the African region are propelling growth of this market.

Nigeria – the largest market for LED and OLED

Among the countries in the Africa region, Nigeria was the largest market for LED and OLED displays and lighting products and accounted for the largest market share in 2015. This growth is primarily attributed to the development of telecommunications infrastructure and increasing internet governance, which in turn is driving the smartphones penetration in the country. Additionally, in Nigeria, rapid growth of new broadcasting technologies and increasing TV broadcasters and channel offerings are expected to be the other potential drivers for growth of the LED and OLED display market.

The Africa LED & OLED displays and lighting products market is classified on the basis of displays and lighting products. On the basis of displays, the market is segmented as mobile displays, consumer TV displays, and outdoor LED displays. The consumer TV displays sub-segment was valued US$ 130.2 Mn in 2015 and is anticipated to register a CAGR of 18.8% during the forecast period.

On the basis of lighting products, the Africa market is segmented by product type and by application. By product type, the market is sub-segmented into LED bulbs, bare LED tubes, LED fixtures, and solar LED lighting. The LED bulbs sub-segment accounted for the highest market share and was valued at US$ 193.9 Mn in 2015. 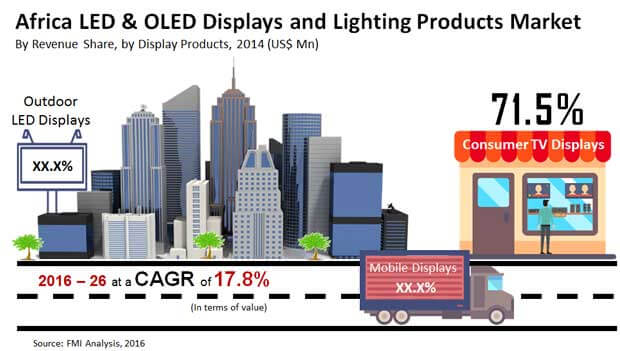 Some of the top vendors identified across the value chain of the global LED lighting market include Cree Corporation, Samsung Electronics Limited, GE Lighting, LLC, Sharp Corporation , OSRAM Licht AG, Daktronics Inc., Eaton Corporation, LG Display Co., Ltd., Barco N.V., Luceco Ltd., LED Lighting SA, and Eagle Lighting. It has been noticed that new companies from consumer electronics as well as from semiconductor segments are entering into the LED lighting market, demonstrating  higher opportunity for service providers as well as for component manufacturers to enhance their activities in the areas of LED lighting.

By LED and OLED Displays