Newly released data by Future Market Insights predicts the global animal artificial insemination market to surpass US$ 2 Bn in 2021. Despite restricted growth amid COVID-19 outbreak, the market is likely to gain impetus, exhibiting 6.5% year-on-year growth in 2021.

Revenue generated in the semen collection procedure segment will rise at 5.6% between 2021 and 2031, sealing its dominance in the overall market. It will account for nearly 71% of animal artificial inseminations conducted in 2021 across the globe.

Until recently, owing to the limited awareness about the advantages of artificial insemination techniques, the availability of the instruments, reagents, and media was fairly limited. According to Future Market Insights (FMI), the sales in the market increased at 4.4% CAGR between 2016 and 2020.

The increasing prevalence of contagious diseases among animals, increase in meat consumption, and demand for improving food security have compelled manufacturers to come with advanced products for veterinary hospitals, clinics, and animal breeders which are the major end-users.

Availability of advanced technologies for the animal artificial breeding will lead to the healthy birth of off-springs, which can produce a high amount of proteins and dairy products. This is expected to have a positive impact on the market growth.

Contagious disease outbreaks can severely affect livestock population and cause economic loss directly and indirectly. In addition, substantial resources are required to control the disease outbreak.

Government organizations along with public organizations have given mutual economic resources for artificial insemination techniques, to prevent and control infectious diseases in livestock animals.

Artificial insemination (AI) is a process originally developed to control the spread of such diseases by avoiding physical contact between animals. Also, using the AI products such as semen extenders which have antibodies helps to prevent the transmission of bacterial diseases. This factor is also expected to have a positive impact on market growth.

The COVID-19 pandemic has affected major business and markets with disruption in supply chains and the total shutting down of activities. However, the demand for milk and milk products or animal products has increased due to lockdown, as people stayed home and preferred household meals.

This is anticipated to give a small push to the animal artificial insemination market for a short period. However, overall growth predictions remain positive for the market. As per FMI analysis, the market is likely to exhibit 5.4% CAGR between 2021 and 2031.

Fresh semen volume, sperm quantity, and seminal plasma level at final dilution may affect the survivability of low sperm dosages. Low sperm dosages have lower quality and fertility, which is one of the drawbacks to their usage in successful artificial insemination techniques.

Increase in animal production has fuelled the demand for animal health services to improve food safety systems and animal public health to protect human health. The acceptance of animal artificial insemination services, on the other hand, is strongly dependent on the country's economic, political, and institutional circumstances.

As a result, governments from numerous nations have joined forces to enhance public knowledge about animal diseases and the privatization of animal healthcare to encourage the adoption of animal artificial insemination services. Livestock Insurance is one such scheme in Europe, which was adopted to improve the effectiveness and efficiency of animal healthcare systems.

Such strong government support is expected to have a positive impact on the adoption of advanced techniques such as animal artificial insemination.

Antibodies in the serum of breeding sires used for semen collection are routinely evaluated, as they are suggestive of any previous infection. Some viruses, such as the horse arteritis virus, can stay in the sperm for several weeks before showing signs of seroconversion

Semen from such animals can be a source of infections that can be transmitted to naive females. This is reducing demand and is projected to limit the global artificial insemination market's growth over the forecast period.

What are the Key Opportunities for Animal Artificial Insemination Market?

Leading industry players such as Zoetis, Sanofi, and Boehringer Ingelheim, currently dominate the global animal insemination market. Among the products offered, reagents and media segments in the artificial insemination market account for higher revenue growth rates for all these major players.

On the other hand, the other AI products such as kits, catheters, sales are done majorly by small players such as continental Plastic Corporation, Swine Genetics Jorgensen Labs, which represents huge growth opportunities to capitalize on the opportunities in the instruments segment at regional as well as international markets.

What is Driving Animal Artificial Insemination Adoption in the U.S?

In the U.S. 80% of dairy animals were bred using AI technology. Such higher adoption of the animal artificial insemination (AI) techniques has made the U.S. one of the key markets, which will hold over 90% of the North America market share through 2021. This trend is expected to continue to forecast period.

Market partnerships, collaborations, and agreements are some of the key trends adopted by the regional players to strengthen their foothold in the animal artificial insemination market.

What are the Factors Driving Revenue Generation in Germany?

Germany will account for over 25% of the Europe market through the assessment period, ending in 2031. The presence of leading players, technological advancements, growing consumption of animal protein, milk, and other dairy products are fuelling the demand for genetically superior breed of animals. This is a key factor speeding the growth of the Germany animal artificial insemination market.

What Are the Factors Driving Animal Artificial Insemination Market Growth in the U.K.?

The U.K. is expected to account for a share of 16% in the Europe market through the assessment period, ending in 2031. Currently, the demand for the high-quality breed is increasing which, in turn, will increase the demand for the artificial animal insemination process.

Considering the high demand, various industrial developmental activities in the region are taking place. This is expected to have a positive influence on the growth of the animal artificial insemination market in the U.K.

For instance, AB Europe in August 2020, has collaborated with Cogent, for providing sexed sheep semen services among the sheep producers in the U.K. this service will enable the producer to obtain a higher quality of the breed and increase the sheep population.

Also, in UK Sires Services in February 2020, have entered into a partnership with IntelliGen Technologies to offer sexed semen services of UK bull owners which will help them maximize the potential of their breeding programs.

Thus, the active participation of industry leaders to provide animal services will provide a positive influence on the market growth.

Among the South East Asian countries, India is expected to account for the larger share of about 40% in the market in 2021. Significant support in the form of funding and rolling out new reforms to conserve the local indigenous breed of cattle are driving animal artificial insemination market growth in emerging economies such as India.

One such example is Madhya Pradesh (MP), which ranks second after Telangana in the adoption of the AI process.  In MP, every hour 70 cows are being impregnated through artificial insemination (AI) to improve the genetic superiority of the animals.

As Per the Government of India, Telangana led the country with 2, 49,819 AIs from September 2019 to March 2020. Also, other states such as Uttar Pradesh had one of the highest numbers of AIs of about 1, 44, 039 conducted during the same period.

Despite the current pandemic crisis in India, the country was able to provide doorstep AI services to the 76.68 lakhs animals doing the time frame of September 2019 to May 2020.

Such strong support from the government is expected to provide a positive impetus for the growth of the Indian animal artificial insemination products market through 2031.

What is the Scope of Growth of Market in Brazil?

Brazil is expected to showcase considerable growth of about, accounting for 35% of the Latin America market in 2021. Brazil has one of the largest commercial cattle herd across the globe with around 238 million head, with 43% dairy and 57% beef cattle.

The number is considerably higher as compared to 95 million head in the U.S. and 85 million in Europe (Source: United States Department of Agriculture Foreign Agriculture Services, March 2021). Such a high cattle population will demand technologically advanced procedures to maintain/conserve the local breed.

Despite exhibiting growth, AI adoption remains limited in Brazil’s dairy sector with only 10% of the cows bred using AI. This number is very low as compared to other Latin American countries such as Argentina with 61% of its cows bred using AI, and Uruguay with 52%.

This low number is attributed to the smaller dairy sector with a limited number of resources to invest in technology, lower profit margins as very limited milk and other dairy products are being exported. Factors such as these are expected to harm the growth of the animal artificial insemination market in this region.

Despite these limitations, the commercialization of sexed semen for the dairy industry has witnessed strong sales with 5.2 million doses.  According to Brazilian Association for Artificial Insemination (ASBIA), the sales grew 13% more in 2020, as compared to 2019. Such developments are expected to fuel the growth of the animal artificial insemination market in this region.

Why has Reagent Media Emerged as Top-selling Product?

A relatively higher adoption of reagent media is witnessed owing to their recurrent purchase. Also, the growing importance of semen culture is driving the sales of this product segment. The segment is expected to account for a 25% market share in 2021. However, the micromanipulation pipettes are poised to grow at a higher growth rate through the end of 2031.

Which Procedure Type is Preferred for Animal Artificial Insemination? 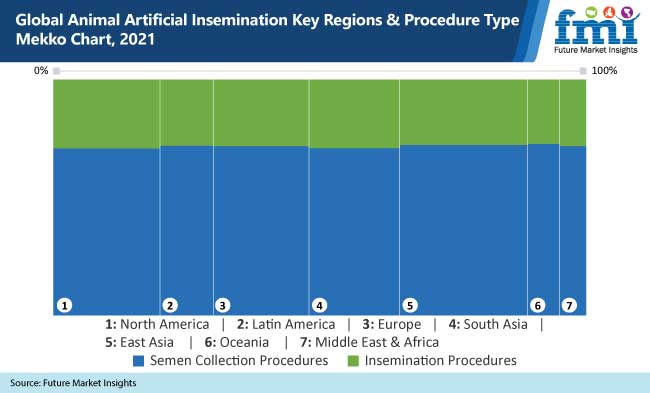 Which Is The Leading Segment Among The Animal Type?

Ruminants accounted for the largest share of around 23% of the global artificial insemination market. The rising in consumption of animal proteins, milk, and milk products is a key factor attributable for the larger share of the segment.

UN Food and Agriculture Organization (FAO) states that beef and buffalo production increased from 69.5 million ton in 2017 to 71.6 million tons in 2018. Also, consumption of milk and milk products has increased. Organization for Economic Co-operation and Development (OECD) and UN FAO also stated that, in 2020, the global per capita dairy consumption was estimated at 113.7 kg, and this number is expected to rise by 44% by 2029.

On the other hand, the equine segment is foreseen to grow at a higher CAGR during the forecast period of 2021-2031. The rise in the need to save endangered species will drive the adoption of animal artificial insemination techniques for this segment.

How Are Animal Hospitals Contributing To Growth?

The rising number of animal artificial insemination being conducted in anima hospitals in developed countries has led this segment to accounting for the largest market share of about 45% in 2021.  Also, the rise in number of veterinary practitioners/physicians is also contributing to the growth of this end-user segment.

Manufacturers in the animal artificial insemination market are focusing on expanding their presence by entering into strategic acquisitions collaborations to strengthen their position in a competitive and fragmented market.

For Instance, IVM Technologies in December 2020, acquired Tecnovet, SL, a Spanish company that specializes in swine artificial insemination technology and other veterinary products.

Zoetis in July 2020, acquired Benchmark Holdings, PLC, which is engaged in developing and commercializing fish vaccines and offers services in vaccinations and diagnostics for aquaculture