Future Market Insights (FMI) in its latest market analysis forecasts that bicycle component sales in the aftermarket sector to reach a valuation of US$ 26.5 Bn by the end of 2031. After a period of tepid growth amid COVID-19 outbreak, sales registered in the market grew by 6% between 2020 and 2021.

The South Asia and Pacific market will hold around 31% of global market share by 2021 owing to rising demand for low-cost transport options and the competitive aftermarket scenario in the region.

Growth predictions remain positive for East Asia due to rising awareness regarding health and fitness leveraged by leading market players in China. The East Asia bicycle components aftermarket is projected to grow at about 7.3% CAGR during the forecast period.

Driven by rising fuel prices, an increasing number of people are opting for bicycles for short trips. The bicycle components aftermarket will therefore grow at 7.0% CAGR between 2021 and 2031, compared to the 5.2% CAGR from 2016 to 2020.

The demand for bicycle components will rise in lockstep with the growth of bicycle sales. Despite issues in some nations with bicycle sales, cycling is on the rise. Bicycle pathways and lanes are becoming mandatory in recreational area rehabilitation plans.

Cycling-to-Work projects are gaining traction like never before. In addition, many corporations now have bike racks outside their offices, indicating a bright future for bicycle component aftermarket vendors.

The ease with which electric bicycles may be operated has aided in the growth of the bicycle component aftermarket. New batteries are being developed with better capacity and longer life, despite their smaller size. These maintenance-free batteries contribute to the ease of use of electric bicycles.

Key market players are working with other industry participants to expand their commercial footprint in various regions of the world. Players are also working on long-term arrangements with bicycle businesses in order to offer their goods and enhance revenue. 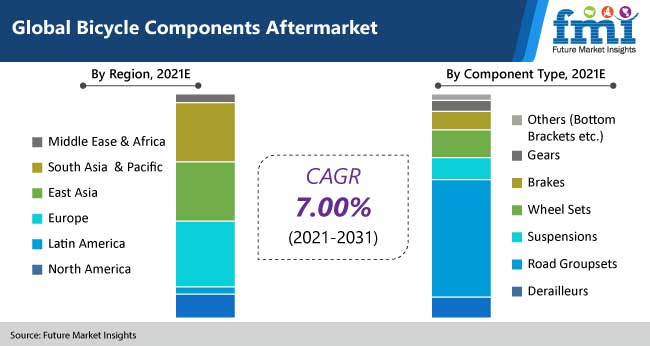 Bicycles are gaining traction as an environmentally beneficial and healthful means of transportation among government organizations. These variables are projected to support the demand for bicycle components from 2021 through 2031.

In European nations such as Denmark, Netherlands and Germany, government legislation and regulations requiring the supply of incentives for the use of e-bikes are already in place. These regulations are likely to create a conducive environment for sales of bicycle components.

What is the Impact of the COVID-19 Crisis on the Bicycle Components Aftermarket?

In response to the COVID-19 pandemic, bicycle sales witnessed a significant surge. Rising concerns over virus transmission in public transportation and an increase in awareness about the role of physical activity for fitness has created a favorable environment for growth.

According to data from research conducted by People for Bikes, an industry group based in Colorado, one in ten American adults reported riding a bike for the first time in a year (or more) since the onset of COVID-19.

According to the Rails-to-Trails Conservancy, a charity that promotes the transformation of obsolete rail lines into trails for walking and cycling in the United States, ridership on trails in the United States peaked at a threefold rise in March 2020 compared to the same period in 2019.

How Large is the Opportunity for the Bicycle Components Aftermarket in the U.S.?

The U.S. will hold over 86% of the North America bicycle components aftermarket in 2021. Imports of bicycles into the U.S. have been rising progressively, however the industry still has a long way to go after a poor start to the year and increased retail demand for bicycles during the COVID-19 pandemic.

As individuals become less willing to use public transportation, reliance on personal transportation has fueled expansion in the country's bicycle industry, resulting in increased demand for bicycle components.

What is the Outlook for Bicycle Components Manufacturers in China?

In East Asia, China is expected to hold over 70% of the bicycle components aftermarket in 2021. Since consumers are seeking alternatives to public transportation, China's bike production increased considerably in May compared to the previous year.

China is renowned as the "Kingdom of Bicycles" since China continues to be a major producer of bicycles and bicycle components around the world. Companies that provide bicycle-sharing services in China are aggressively extending their operations in countries like India and Australia.

Why is Demand for Bicycle Components Increasing in Germany?

Germany's cycling sector has a promising future, with prospects in road bicycles, MTB, children's bicycles, and e-bikes showing positive signs as the country maintains a 20.8% share in Europe in 2021.

Two new phenomena that have a direct impact on the dynamics of the bicycle business are the expanding use of electric bicycles and the growing demand for bicycles with improved safety features.

How is the Bicycle Components Aftermarket Faring in India?

India is among the top bicycle producing countries in the world, and the market is set to surpass a valuation of US$ 1.1 Bn in 2021, rising at a promising CAGR of over 7% through the assessment period.

While India has a high population of bike riders, the lack of dedicated infrastructure for cycling, limits new bike sales and consequently sales of aftermarket components. Hero Cycles is one of the largest manufacturers of bicycles and bicycles components in India, producing 5.5 million cycles per annum.

Why the Demand for Road Groupsets on the Rise?

Based on bicycle component types, road groupsets is the leading category, accounting for nearly 53% of the market in 2021. The groupsets are the collection of various components that make bike stop and go, including drivetrain, shifters, and brakes. As they come in compatible sets, end users prefer to purchase the groupsets instead of individual components.

Why are Components for Electric Bicycles Witnessing Higher Demand?

There are now e-bike specialists present throughout Europe and Asia. Consumer test days, as well as other marketing efforts promoting electric bicycles, are gaining traction. Entrepreneurs in Latin America, such as those in Mexico, are investing in the electric bicycle business. In the coming years, low labor costs and attractive economic circumstances are expected to attract a large number of manufacturers.

Which are Preferred Sales Channels for Bicycle Components?

Department stores are projected to account for a major share of the global bicycle components aftermarket, with a valuation of over US$ 5.1 Bn in 2021. Easy access to consumers, the availability of a wide range of brands and models are key factors supporting sales figures.

In many ways, technological advancements and the establishment of government subsidies are functioning as catalysts for the bicycle industry's growth. Increased revenues and government backing would aid in the development and sale of affordable, green means of transportation. Long-term agreements with end users will provide revenue stability as well as expansion potential.

Electric bicycles are becoming increasingly popular in today's atmosphere, as the emphasis on electric mobility increases. On the other hand, bicycle component manufacturers are well aware of significant investments for a relatively small market. As a result, collaboration or partnerships may be a realistic alternative.

What is the current valuation of the bicycle components aftermarket?

The bicycle components aftermarket is expected to surpass a valuation of US$ 13.5 Bn by 2021.

At what rate did the bicycle components aftermarket expand between 2020 and 2021?

What is the bicycle components after market demand outlook?

What are the key trends prevailing in the bicycle components after market?

Leading bicycle components manufacturers are focusing on meeting the new standards required for e-bike offerings. Also, there is an increasing focus on collaborations with OEMs to widen revenue streams.

What are the key factors driving the sales of bicycle components afters?

Increasing investments in research to lower production costs, the growing awareness about the importance of health and fitness, and developments in material and design innovations will drive growth in the market.

What is the North America bicycle components after market outlook?

North America is a lucrative market for bicycle components, reflecting a 5% CAGR through the end of 2031.

What is the cumulative share of the top five companies in the bicycle components after market?

At what rate will the bicycle components aftermarket grow in Europe?

Future Market Insights has forecast the Europe bicycle components aftermarket to exhibit a CAGR of 6.3% between 2021 and 2031.

Which are the top 5 countries exhibiting high demand for bicycle components afters?

The U.S., China, Germany, India, and Japan are among the leading markets for bicycle components, reflecting high demand.

What is the share of the Japan and South Korea bicycle components after markets?

As per Future Market Insights, the Japan and South Korea bicycle components aftermarkets cumulatively accounts for 7.8% of the global market.