The BRIC organic baby food market is expected to display exponential prospects of growth, in the near future in spite of unprecedented effects of the coronavirus pandemic in 2019 and 2020. Growing awareness among parents about clean label foods, concerns over adequate infant nutrition and favorable government policies will aid the development of a conducive growth environment for market players through the assessment period between 2021 and 2031.

How Does the Historic and Future Outlook of the Acetone Market Compare?

Organic baby food consumption across BRIC countries is anticipated to display exponential growth during the assessment period, driven by parental concerns regarding adequate infant nutrition. China and India will continue as major revenue contributors in the industry. Government initiatives to counter malnutrition among children in these regions are likely to generate a favorable environment for growth.

Leading manufacturers are pushing to bolster production capacities in these emerging economies to maintain sustainable revenue streams in the sector. This is especially true for milk formula products which are gaining attention as a viable supplement to breast milk.

According to the analysis by FMI, organic baby food sales in BRIC countries are likely to rise at double-digit CAGR from 2021 to 2031. Organic baby food is finding increased adoption owing to a significant rise in clean label trends across the food and beverage sector. Further, investments and advances made into the organic farming sectors of these countries is also driving the industry. The covid-19 crisis has generated key growth opportunities for organic baby food manufacturers through 2020 owing to increased health awareness levels among consumers.

On the other hand, strict lockdown regulations disproportionally impacted small scale market players, owing to cash flow issues during the pandemic. A significant transition to sales through online channels have proven beneficial to market players within the sector, which will continue in the years ahead.

How is Organic Farming Contributing to Production?

According to an Environment Health Perspectives report, organic agricultural exports certified with the OFDC label have grown since China joined the World Trade Organization, with Certification and Accreditation Administration of China (CNCA) standards that are compatible with European, Japanese, and United States Standards. Further, In November 2017, Vladimir Putin announced intentions to turn Russia into the world’s largest organic food exporter. Also, a new law regulating production, transport, and storage of organic food was passed in August 2018. The law was fully implemented in 2020.

According to Agencia Brazil, Brazil is home to over 17,000 organic food producers, a rise of approximately 11,000 in the past decade. India and South Africa have also proven to be high potential markets, India accounting for 30% of the global organic producers. Consequently, easy access to raw materials for organic baby foods in BRIC countries will support long-term growth of the industry.

How is BRIC Trade Influencing Developments?

According to a report by the Export Import Bank of India, BRICS economies cumulatively account for more than 22% of global economic output, 17% of global trade, and more than 40% of the global population.

A significant driver of BRICS growth arises from large scale Chinese and Indian industrialization and urbanization activities generating strong demand for Brazil and Russia’s and natural resources including food products. According to a Department of Commerce report, in the year 2018-19, India’s total export of agricultural and allied commodities to BRICS nations was of the order of US $ 57.84 million. Similarly, in 2019, the turnover of Russia-China trade accounted for US$110.75 billion, a rise of 3.4%, with agriculture and allied commodities being the largest winners. These trade trends bode well for the sales and distribution of organic baby food in the BRIC region.

What are the Leading Challenges for Manufacturers?

Market players in BRICS economies have gained from reduced tariff rates in recent years. However, there continue to exist restrictions on imports in terms of non-tariff barriers. There has been a rise in the incidence of technical barriers to trade (TBT) and the application of sanitary and phytosanitary measures (SPS). Apart from these, the imposition of anti-dumping measures, and countervailing duties and have also adversely affected intra-BRICS trade.

Also, lack of awareness about organic foods, particularly in rural areas holds back sales prospects. In addition, organic farmers and food producers in BRICS countries, India and South Africa in particular have been facing challenges in terms of certification standards, which are complicated and in many cases not strictly enforced. This remains a challenge for baby food manufacturers as well impacting raw materials supplies, and distribution, particularly in terms of exports.

Why is China expected to lead the BRIC organic baby food market?

According to the Chinese Public Security Ministry, more than 10 million new births were recorded in the country during 2020. While birth rates continue to decline, the vast population of the country ensures that it remains a key market for organic baby food. However, awareness among parents about organic produce remains a challenge for market players. 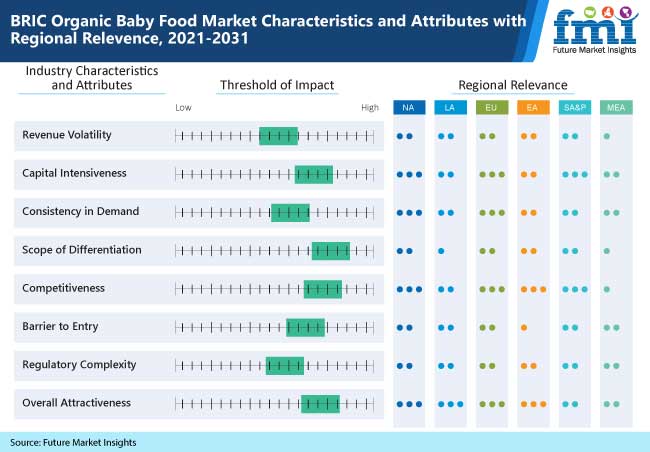 Hong Kong however has displayed significantly higher rates of adoption, which can be attributed to higher incomes and better health consciousness boosts expenditure on safe food. The Hong Kong Organic Resource Centre, requires soil samples from all farm applicants, with samples being tested for residual heavy metals and other contaminants under Dutch standards, which will prove conducive for organic baby food sales.

The Export Import Bank of India report has also stated that China has played a major role by accounting for nearly half of the intra-BRICS trade, followed by India, Brazil, Russia, and South Africa, making it an important market for organic baby food manufacturers.

What factors are affecting sales in Russia?

Russia accounted for approximately 1.4 million births in 2019 and 2020. According to the Russian Ministry of Agriculture, organic food sales witnessed a year on year growth of over 20%. Russia, is a major importer of consumer-oriented commodities, the largest in Europe attributed to 145 million consumers. While Russian parents continue to seek affordable options in baby food, there is also a growing demand for natural, healthy, and novel products.

Which products are driving demand in India?

The Indian baby food market has emerged with a large segment for infant milk formula which is being viewed as a viable alternative to breastfeeding. Growing numbers of working parents are supporting sales, which has led to the increased popularity of formula feeding, driven by healthcare recommendations.

Organic baby cereal manufacturers are focusing on formulations with nutrition-based ingredients and including rice, wheat, oatmeal, and more, to meet the high nutrition requirements recommended for infant care at early stages.

Organic baby food is still at a nascent stage, however, growth is expected to be strong with the emergence of numerous startup businesses in the sector. India has surpassed China in terms of birth rates accounting for 17.3 births for every 1000 people in 2021. This is a key factor which makes the country a potentially lucrative market for manufacturers through 2031.

What are the influencing factors for the Brazil market?

The organic baby food market in Brazil has proven to be consolidated with international companies such as Nestle S.A. and Heinz possessing major market shares. As per a WHO report, demand for organic baby food is projected to rise strongly due to changes of consumer lifestyles in terms of feeding habits, rising disposable incomes, and concerns about added chemicals among others.

Major players are likely to remain dominant here owing to consumer loyalty. Further, lack of investments also challenge the growth of local players owing to poor economic growth. More than 2.8 million births were registered in Brazil during 2019, creating lucrative opportunities for market players. For the foreseeable future, developments in the market will largely rely on economic and political stability in the years to come.

How are organic baby food sales set to fare in South Africa?

Currently, South Africa does not have any legislation to govern the production of organic foods. The South African organic produce sector is consequently reliant on international regulations such as those set by by the International Federation of Organic Agricultural Movements (IFOAM). Farmers have to be certified by bodies such as Ecocert, SGS, and the British Soil Association.

However, with approximately a million new births taking place annually in the country, there is a strong growth potential for manufacturers in South Africa. Also, South Africa, apart from being a major trading partner for India, China and Brazil, serves as a key trade route for India-Brazil trade. Also, efforts by governments to improve maternal health care are expected to create an increasingly conducive environment for growth in the near future.

Which organic baby food type is the leading driver for demand?

Milk formula and supplements is a major contributor to revenue generation in the organic baby food market, also reflecting a strong growth rate through the forecast period. Increasing access to information about breast feeding and awareness about the viability of these products as a supplementary nutrition source is driving demand.

The dried organic baby food segment has also emerged as a major contributor to sales, owing to ease of use and consumption for parents and babies in addition to better shelf life properties for manufacturers. Efforts towards minimizing contaminants in food offerings and reducing the chances of recalls are expected to gain traction in the industry to sustain long-term growth prospects.

How large is the opportunity for sales through supermarkets?

Organic baby food sales in BRIC occur largely through specialty outlets, supermarkets, online selling channels, and drugstores/pharmacies, among others. Supermarkets are expected to remain a major contributor for product distribution owing to ease of access to consumers. Growth is likely to be stronger in India and Brazil with faster rates of birth. The role of online sales channels in product distribution is expected to make strong gains owing to the covid-19 pandemic through 2031.

These players have displayed increased interest on strategies involving the expansion of product portfolios to consolidate market position and increase levels of profitability in consideration with regional and international production and distribution efforts.

In March 2021, Arla Foods announced the launch of new organic lines to its Nutrilac product range aimed towards Chinese consumers, a key category being in the baby food and formula segments, to leverage the growing number of affluent middle class families.

In December 2020, Germany based DMK Group announced its intentions to expansion of production facilities in Russia for dairy products including organic baby food products. The decision came on the back of a new cheese production facility aimed at the emerging economy.

In December 2020, the India based startup Slurrp Farm announced the launch of millet based food mixes and their move to online sales platforms in collaborations with logistics companies to enable sales through the company website in a bid to combat the covid-19 pandemic.